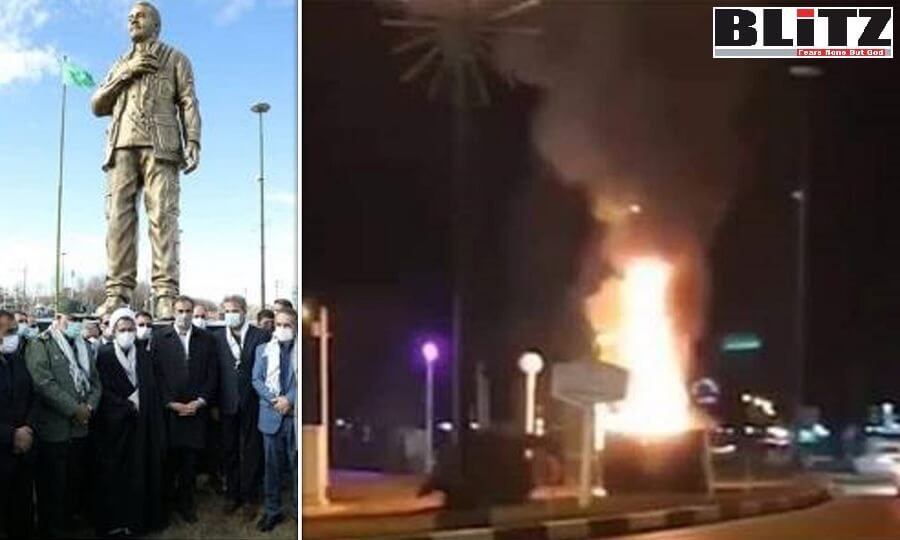 Pro-democracy protests in Iran in getting stronger with protesters setting fire on statues to Qassem Soleimani, the monstrous military general and once the head of the Revolutionary Guards’ (IRGC) Al-Quds Force. Writes Hugh Fitzgerald

The tottering regime in Tehran that presides over an impoverished nation has been putting up statues to Qassem Soleimani, trying to deflect attention from domestic woes to hero-worship of the most celebrated Iranian military figure, once the head of the Revolutionary Guards’ (IRGC) Al-Quds Force. It turns out the attempt to build this cult around Soleimani has failed. Instead of Iranian crowds salaam-salaaming before statues of Qassem Soleimani, Iranians infuriated with the regime and their own impoverishment have instead been setting them on fire.

A report on the latest act of arson as a political statement in Iran is here:

An enormous statue of Gen. Qassem Soleimani — the late commander of Iran’s feared Quds Force who was assassinated by a US drone strike — was burned by protestors on Wednesday [Nov. 5] night, just hours after it was unveiled in the provincial city of Shahr-e Kord.

Iranian opposition activists on social media shared video and still images of the statue being consumed by flames. Some commenters argued that the apparent arson attack was a dramatic symbol of the failure of Iran’s Islamist regime to impose Soleimani as a symbol of Iranian national unity.

Official Iranian media outlets hinted at a deeper conspiracy behind the burning of the statue. “This treacherous crime was carried out in darkness, just like the other crime committed at night at Baghdad airport,” stated a report carried by the ISNA news agency, which described the statue’s burning as a “shameful act by unknown individuals.”

Soleimani was killed in the early hours of Jan. 3, 2020 during a US drone strike on Baghdad Airport, where he had just landed ahead of a meeting with the prime minister of Iraq. “This was a bad guy, and it was time to take him out,” then US Secretary of State Mike Pompeo said of the operation, adding that as the commander of the Quds Force (IRGC-QF) — the international wing of the Islamic Revolutionary Guards Corps — Soleimani had been responsible for the deaths and displacement of thousands of civilians in Iraq and Syria.

The burning of Soleimani’s statue in Shahr-e Kord, capital of Iran’s restive Chaharmahal and Bakhtiari province in the southwest of the country, continues a pattern in recent months of burning banners and posters featuring Iranian leaders. Last August, another statue of Soleimani was reportedly burned down in the city of Yasuj, located in the neighboring province of Kohgiluyeh and Boyer-Ahmad.

Where once Iranian crowds stomped on Israeli and American flags before setting them on fire, now we have Iranians, enraged at their own government, going out into the streets to shout “Death to the Dictator!” and “No to Gaza, no to Lebanon – We Give Our Lives For Iran!” Iran’s currency has lost 90% of its value in the last two years; Iran’s GDP has fallen to 1/3 in the same period; the result is that sixty-percent of Iranians now live below the poverty line. The people shouting “no to Gaza, no to Lebanon” were protesting against Tehran’s policy of sending money and expensive weaponry to Hamas and Hezbollah, instead of keeping that money, including the money spent on those costly weapons, at home to help Iranians.

Marking the second anniversary of Soleimani’s death this week, Iran revived calls for US and Israeli officials to be held accountable for the assassination.

Given the dire implications of this terrorist act on international peace and security, the Security Council must live up to its [UN] Charter-based responsibilities and hold the United States and the Israeli regime to account for planning, supporting and committing that terrorist act,” the Iranian Ambassador to the UN, Majid Takht Ravanchi, stated in a letter to the UN Security Council’s president on Monday.

This setting on fire in Shahr-e-Kord of a huge statue of Qassem Soleimani, after Ayatollah Khomeini the most celebrated figure in the Islamic Republic’s pantheon, must surely rattle the regime. It’s not even the first such act of political arson – another statue of Soleimani, though not nearly as grand as the one just destroyed, was set on fire last August in the city of Yasuj. Lots of posters and banners depicting other Iranian notables, such as one with a ghoulishly smiling Supreme Leader Ali Khamenei, have also been defaced and destroyed throughout Iran. But the destruction of that enormous statue in Shahr-e-Kor of Soleimani is particularly telling, because the regime has been attempting to create a cult precisely around the figure of the “martyred” Al-Quds general, and has singularly failed.

Soleimani, for many Iranians, represented in the regime all that is most damaging to their own wellbeing. For he was the head of the IRGC Al-Quds Force, in charge of all operations outside of Iran, supporting Tehran’s allies abroad with money and weapons. It was Qassem Soleimani who arranged for aid to be sent to the Houthis in Lebanon, to such pro-Iranian Shia militias as Kataib Hezbollah in Iraq, to the Syrian dictator Bashar Assad, and to Hezbollah in Lebanon. Meanwhile, Iranians have become ever poorer, partly as a result of their country’s expensive adventurism abroad, directed until 2020 by the late Qassem Soleimani. Those who set his huge statue on fire in Shahr-e-Kord were making a wordless, but perfectly understandable statement: “No to Gaza! No to Palestine! No to Lebanon! No to Iraq! No to Yemen! We give our lives for Iran!”