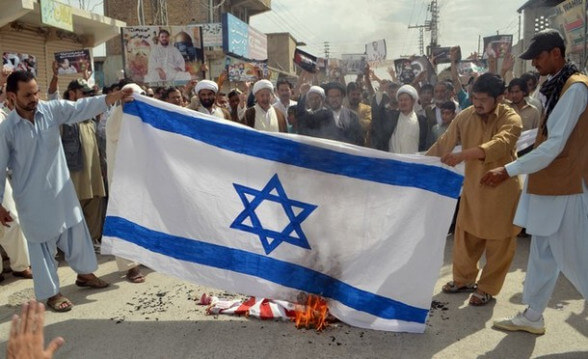 Rumors flew recently that Israeli officials had secretly visited Islamabad at around the same time that PM Netanyahu visited Oman. True or not, no one should get too excited. Islamabad has no intention of establishing diplomatic relations with Jerusalem anytime soon.

On October 25, an Israeli journalist tweeted that an Israeli jet had flown from Tel Aviv to Islamabad, where it spent 10 hours before flying back. The tweet spread like wildfire, prompting Pakistan’s opposition parties to demand an explanation for the “secret Israeli mission.” Pakistani President Arif Alvi responded by ruling out the establishment of any kind of relations with Israel.

During the news frenzy, Pakistan’s Urdu and English-language media went into overdrive, with some even suggesting that it was Netanyahu himself who had secretly visited Islamabad in conjunction with his trip to Oman. (Neither Oman nor Pakistan has diplomatic ties with Israel.) The PTI-led government not only categorically dismissed the very idea of an Israeli jet landing in Islamabad, but claimed that the report was part of a conspiracy. Information Minister Fawad Chaudhry rejected the reports entirely, asserting that the PTI government “would not negotiate in secret with either Israel or India.”

A meeting between Israeli and Pakistani officials in Islamabad would be a major geopolitical development, and true or not, the report triggered a public debate on the issue. However, it remains highly unlikely that Pakistan will consider establishing formal relations with the State of Israel for the foreseeable future.

Israel is a political taboo subject in Pakistan. For seven decades, the country’s ruling class and population have supported the Palestinians without Islamabad having to do much to encourage them. In the past, both Pakistan and India have pursued their own interests in the Middle East by championing the Palestinian cause. While Pakistan used the Islamic factor to assert its pro-Arab credentials, India used secular logic to justify its support. But the world changed dramatically with the end of the Cold War, and the picture shifted. India established full diplomatic relations with Israel, opening an embassy in Tel Aviv in January 1992.

At a time when many Arab countries have taken a pragmatic stand towards the Israel-Palestine issue, Pakistan’s policy remains frozen in time. Turkey, one of the most powerful players on the West Asian geopolitical chessboard, has formal ties with Israel. Egypt, the largest Arab state, has had ties with Israel since the 1979 peace treaty. Jordan followed suit in 1994. Saudi Arabia, too, under Crown Prince Muhammad bin Salman, has begun to tone down its public rhetoric against Israel, and there are signs that Riyadh might be contemplating formal ties with Tel Aviv. As Pakistan follows the Saudi line on many global issues, there has been speculation that Islamabad might follow suit, particularly in view of its growing economic dependence on Riyadh.

Some Pakistani analysts favor their country’s establishing formal ties with Israel, primarily because doing so would give Islamabad an important mediatory role in the Israeli-Palestinian conflict. Another rationale is that the Palestinian leadership has a good relationship with India and has not extended its wholehearted support for Pakistan’s policies on India’s Jammu and Kashmir, which Islamabad wants to take. When India objected to a Palestinian envoy’s participation last year in a rally spearheaded by Lashkar-e-Taiba (LeT) chief Hafiz Saeed, the terrorist mastermind behind the deadly 2008 Mumbai attacks, Palestine immediately recalled its envoy to Pakistan.

But most of the political elite remains firmly opposed to Pakistan’s recognition of Israel, as support for ties with Jerusalem is deemed to be a betrayal of the Palestinian plight. This is a hypocritical position, as Islamabad is entirely silent on the suffering of Uighur Muslims and Kurds at the hands of China and Turkey, who are Pakistan’s closest allies.

India is another elephant in the room when Pakistanis discuss Israel. Because Pakistan’s national security doctrine is heavily Islamist and India-centric, Pakistan’s mullah-military alliance would not like to be seen as soft on a country that is considered to be part of the so-called “Zionist-Hindu” conspiracy against Pakistan. Pakistani conspiracy theorists often interpret Indo-Israeli relations as ideological – as a war against Pakistan and Islam. More realistic discussion focuses on the arms deals between the two countries, which of course have direct strategic implications for Pakistan’s nuclear assets.

The first and only official meeting between Pakistani and Israeli representatives took place during General Pervez Musharraf’s tenure as president in 2005. In February of that year, Pakistan’s foreign minister, Khurshid Kasuri, had a breakthrough meeting with Israeli foreign minister Silvan Shalom in Ankara, a meeting facilitated by the Turkish government. In an interview at UN headquarters in New York in September 2005, Shalom assured Islamabad that Tel Aviv had never participated in any secret plan with India to target Pakistan’s nuclear assets.

It is not difficult to understand why Shalom chose to mention the nuclear issue. Pakistan’s strategic ambitions and clandestine nuclear weapons program were hot issues in India’s strategic debates during 1980s. India’s growing concerns led to speculation that it might follow Israel’s example and conduct an Osiraq-type strike against Pakistan’s nuclear facility at Kahuta, near Islamabad.

According to Adrian Levy and Catherine Scott-Clark, who authored a book entitled Deception: Pakistan, the United States and the Global Nuclear Weapons Conspiracy, India and Israel secretly planned to hit Kahuta, but aborted those plans when the CIA tipped off Pakistan’s then-president General Zia-ul Haq in 1984. “In February 1983,” they wrote, “with the strike plan at an advanced stage, Indian military officials had travelled secretly to Israel, which had a common interest in eliminating (Abdul Qadeer) Khan, to buy electronic warfare equipment to neutralize Kahuta’s air defenses.” When India put its plans on hold after Raja Ramanna, then-director of the Bhabha Atomic Research Center, was warned by the then-chairman of the Pakistan Atomic Energy Commission, Munir Ahmed Khan, in Vienna that Islamabad would counterattack Trombay in the event of an attack on Kahuta, Israel suggested that it carry out the raid “using India’s airbase at Jamnagar to launch Israeli air force jets and a second base in northern India to refuel. A senior Israeli analyst close to the operation recalled that the plan was to enter Pakistan beneath the radar, with jets tracking the line of the Himalayas through Kashmir.” But India and Israel backed off from the plan after the CIA tip-off, and the attack never happened.

P.R. Kumaraswamy, in his book India’s Israel Policy, explains the rationale behind India’s reluctance to carry out the strike. He argues,

“[A] preemptive strike against Islamabad’s premier nuclear facility would have gone against India’s larger interests. With vital national installations such as oil refineries, nuclear facilities, and other economic targets lying within the striking range of retaliatory air strikes by Pakistan, the long-term strategic benefits of an Osiraq-type operation were limited and indeed remain counterproductive. Any open collaboration with Israel on an aggressive defense policy was politically costly for India, especially when it lacked the type of superpower guarantees that Israel managed to secure following the Osiraq bombing.”

The Shalom-Kasuri meeting led to a meeting between Musharraf and Israeli PM Ariel Sharon in New York in September 2005. In an interview with an Israeli newspaper in 2012, Musharraf urged the Pakistani government to establish diplomatic ties with Israel, but Islamabad has not been able to bring about so radical a policy shift.

Given that Pakistani PM Imran Khan has been accused of being a stooge of the “Jewish lobby” on account of his first marriage to Jemima Goldsmith, as well as the shaky parliamentary majority of his government, he is unlikely to make any political move that can be considered remotely pro-Israel. And indeed, little else can be expected from a country whose ruling class is hell-bent on pursuing the ideological project of opposition to India, despite the suicidal folly of that project.