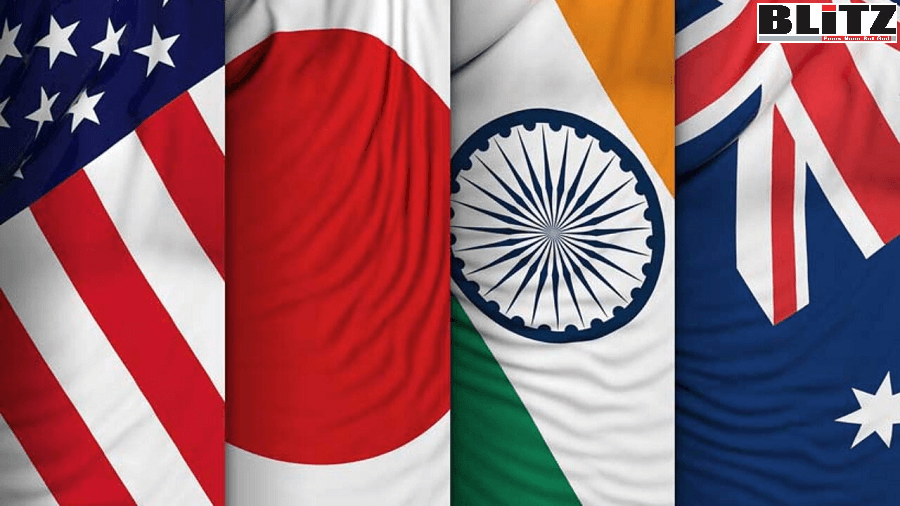 It is objective that the tie-up of the Quad could pose some challenges to the near-monopolistic position that Chinese rare earths have long held on the world stage, but it is not possible to shake off their reliance on China’s supply chain in a short period. By Xie Wenting and Zhang Hongpei

US President Joe Biden is scheduled to join the first-ever virtual meeting of leaders from Japan, India and Australia on Friday as the country’s latest attempt to wield influence in the Indo-Pacific region to contain China.

While the US is trying to contain China through the Quadrilateral Security Dialogue, known as Quad, or the “Asian NATO,” such ambition is impossible to realize, experts told the Global Times. And given the different demands, political and religious situations in the Indo-Pacific region, it is impractical for the US to replicate the NATO model in Asia.

First launches in 2007, the Quad featured semi-regular summits. It’s not until recent years that foreign ministers from the Quad began to meet regularly. But this time, the virtual meeting marks the first time that the top leaders of the four countries have come together.

US President Joe Biden’s decision to make the Quad one of his earliest multilateral engagements “speaks to the importance we’ve placed on close cooperation with our allies and partners in the Indo-Pacific,” said White House press secretary Jen Psaki, according to media reports.

While Biden tried to rely on the loosely organized Quad for its Asian ambition, the divergences among the member countries, which are so conspicuous, could dampen this dream.

“Given its chaotic domestic situation and bipartisan division, the US wants to rely on other countries to reach its aim, but other countries also want to rely on the US to reach their goals. This will lead to problems in resource distribution,” Li Haidong, a professor at the Institute of International Relations of China Foreign Affairs University, told the Global Times on Friday.

On Friday’s meeting, it’s reported that the four countries will discuss a range of topics, from the COVID-19 pandemic and climate change, to reducing dependence on China-produced rare earths and providing funds to boost India’s vaccine production.

Analysts pointed out that unlike the traditional military allies that the US has formed, it now seeks to include more areas, especially in terms of the economy, to contain China, which is in sharp contrast to the multilateralism that Biden vocally advocated for.

He Weiwen, a former economic and commercial counselor at the Chinese consulate generals in San Francisco and New York, told the Global Times on Friday that China remained the largest contributor in terms of economic output in the region in the coronavirus-plagued 2020 and a key factor underpinning the strong economic rebound in the region, with its GDP forecast to grow at over 8 percent in 2021. Its trade with ASEAN is double the size of that between the US and the trading bloc.

“It is ridiculous for the four nations to make such a countering-China move in the Asia-Pacific region,” he said.

Will the Asian NATO be effective?

A senior US official told Reuters that Friday’s meeting will send “a very strong signal of common cause and purpose. And its goal is basically to introduce the Quad as a new feature of regular diplomacy in the Indo-Pacific.”

While the Quad is not a formal military alliance, it’s increasingly viewed by many as a weapon to contain the growth of China in the Indo-Pacific region.

Philip Davidson, head of the US military’s Indo-Pacific Command, on Tuesday expressed his hope that the Quad could “build into something bigger.”

But the reality could hit these US politicians’ confidence. Countries like India and Japan have close economic ties with China. The border clash should make India realize that being China’s enemy won’t do the country any good, analysts said.

Meanwhile, in Asia, most countries do not share the US version of “democratic values” like NATO, and also given the different religious beliefs, they won’t easily follow the US way, he added.

The Quad nations planned to cooperate in funding new production technologies and development projects for rare earths, as well as lead the way in drafting international rules, according to the Nikkei Asian Review.

The Quad’s intention to counter China in the rare-earth sector is logical given the dominant role the country plays in supplying more than half of the world’s such key materials, yet the lack of relevant technologies and talent pool could obstruct their progress in building up a supply chain from scratch, which needs to take quite a few years to complete, industry observers told the Global Times.

Among the four nations, Australia and India are the suppliers while Japan and the US are big consumers of rare earths, dubbed “industrial gold” composed of a group of 17 chemical elements used in everything from high-tech consumer electronics to military equipment.

According to the US Geological Survey, China accounted for 58 percent of rare-earth production worldwide in 2020, down from around 90 percent some four years ago as the US and Australia have gradually boosted their own production.

The US has united with Australia, home to the world’s sixth-largest reserves of rare-earth minerals, over recent years to improve rare earths supply.

“It’s more like a tone-setting meeting today for the four nations to team up for rare earths as they have realized the need to secure supply, but uncertainties loom in the implementation period,” Liu Enqiao, a senior energy analyst at Beijing-based Anbound Consulting, told the Global Times on Friday.

“Each nation has its own interests to prioritize. For Australia and India, if they only play the role of rare-earth exporters instead of considering the practical market interests, it would not be sustainable,” Liu noted.

It is objective that the tie-up of the Quad could pose some challenges to the near-monopolistic position that Chinese rare earths have long held on the world stage, but it is not possible to shake off their reliance on China’s supply chain in a short period. In the next 10 years, China will still be an important supplier in this system, said Chen Zhanheng, deputy head of the Association of China Rare Earth Industry.

“China has invested substantially in improving its refining technology over the past years, forging a definite advantage in this regard. The West currently lacks the relevant talent pool and efficiency to compete with China, plus they face much higher costs to do by themselves instead of importing,” Chen told the Global Times on Friday.

China has no intention to use rare earths as a countermeasure against any country, which would only serve to accelerate development of rare earths in other markets, said experts.

The four countries also reportedly would fund India to boost its vaccine productivity to contain what they called China’s “vaccine diplomacy.”

Tao Lina, a Shanghai-based medical expert on vaccines, told the Global Times on Friday that vaccine supply is still far from enough now. These countries should not just focus on vaccine completion.

“When they try to increase vaccine production, they should not be soft on the control of vaccine quality but should avoid the occurrence of vaccine quality accidents which will influence the public’s confidence in the vaccines,” he said.