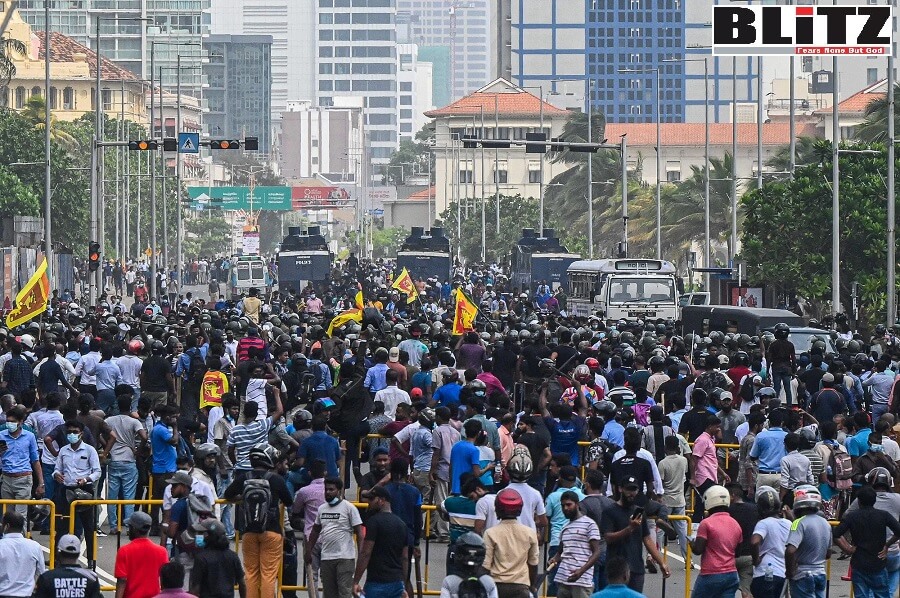 After more than one-months of protests and political turmoil due to skyrocketing rise in prices of essentials as well as unbearable inflations, the cruel, scandalous and extremely corrupt Rajapaksa regime unleashed its thugs on the innocent Sri Lankan civilians outside the residence of Prime Minister Mahinda Rajapaksa at Temple Trees in Colombo on May 9, 2022, which later resulted in fleeing of Rajapaksa along with his family members and take refuge in a military base. Meanwhile, Sri Lankans have gathered at airports obstructing the Members of Parliament and other officials of the government from leaving the country.

Media reports said, after demolishing the tents and assaulting the people gathered there, the thugs proceeded to Galle Face where they destroyed the tents at GotaGoGama including the medical tent and the library, as police watched. “Gota Go Gama” means “Gota Go Village” in Sinhala, and it has been set up (similar to other occupy movements) like a small village providing food, toilets and free emergency medical services for the protesters occupying the space demanding president Gotabaya Rajapaksa and his family members resign from key government positions.

Condemnation of the attacks on the peaceful protesters came in immediately. Amnesty International said: “The state has a duty to create an enabling environment for peaceful assembly and freedom of expression. As such, it must take necessary, reasonable and proportionate measures to de-escalate the violence at peaceful protest sites, to protect the right to protest of those who have been peacefully agitating for one month. Amidst reports of injuries sustained by peaceful protestors and of inadequate protection provided by police to guarantee the right to protest, the State must ensure prompt, fair investigations and bring those responsible for such violence to justice”.

Television channels live-streamed graphic footage of the destruction and the brutal attacks on unarmed people by thugs carrying metal poles. Several people have been hospitalized.

“The use of pro-govt thugs to attack peaceful protestors was always one of the more likely ways the Rajapaksa government would try to cling to power – despite virtually the whole country wants them gone. This changes the political dynamic in major and dangerous ways,” warned Alan Keenan from the International Crisis Group.

“The Rajapaksas are fascists, the SLPP is a fascist party. Their instincts are always violent, their endgame is always the control of the state. Some should think again if political agreements, interim governments, and above all, constitutional change can be done with fascists”.

“These thugs was assembled at prime minister’s official residence this morning and walked in numbers to assault innocent peaceful antigovernment protesters.. how can this happen? Police and others just watching this”.

“Strongly condemn the violent acts taking place by those inciting & participating, irrespective of political allegiances. Violence won’t solve the current problems. I request all citizens to remain calm & exercise restraint. I urge everyone to work together in solving this crisis”.

“We condemn the violence against peaceful protestors today, and call on the government to conduct a full investigation, including the arrest & prosecution of anyone who incited violence. Our sympathies are with those injured today and we urge calm and restraint across the island”.

“Strongly condemn the violence against peaceful protestors today. The authorities have a responsibility to safeguard citizens’ rights to protest peacefully and to hold the perpetrators of violence to account”.

What is the destination of Sri Lanka?

Peaceful and spontaneous protests had intensified across Sri Lanka over the past few weeks since March 31, 2022. The general public, including students, teachers, doctors and other professionals as well as the opposition parties organized separate protests across the country, the highlight of which was the protest at Colombo’s Galle Front. Their only demand was that President Gotabaya Rajapaksa and his brother Prime Minister Mahinda Rajapaksa should resign immediately over mainly their mishandling of the economy that had led to the current economic crisis in Sri Lanka.

To quell the public uprising, President Gotabaya Rajapaksa declared a state of emergency on April 1, 2022, and major social media platforms (Facebook, YouTube, Twitter, WhatsApp, Viber etc.) were blocked for around 16 hours on April 3.

Amidst protests, all 26 ministers of the Sri Lankan cabinet resigned on the night of April 3, and the state of emergency was withdrawn on April 5.

Sri Lanka is reeling from its worst financial crisis since independence in 1948, as foreign currency shortages due to the inept handling of the economy hampered the import of food, fuel, medicine and other essential items. Shortages of fuel, rolling blackouts, gas and medicine, and higher costs of food have made normal lives miserable. On April 12, 2022, Sri Lanka declared that it is defaulting on its US$ 51 billion foreign debt.

The protests have been observed as spontaneous and leaderless as the usual suspects who organize protests — such as the unions and student groups — were not seen. Some political parties have mentioned that they will not join protests by unknown or anonymous groups.

As of April 14, there have been 240 protests of different sizes around the country by different social groups according to Watchdog’s protest tracker. These include protests by fisherfolk in Galle and Ambalantota, carpenters in Moratuwa, private bus drivers in Anuradhapura, health workers of the Kandy, Kegalle and Mullaitivu hospitals, Free Trade Zone workers in Katunayake, and public protests in Akkaraipattu, Balangoda, Bandarawela, Batticaloa, Dambulla, Gampola, Habarana, Hambantota, Jaffna, Kandy, Kelaniya, Kurunegala, Mannar, Matara, Minneriya, Mullaitivu, Nuwara Eliya, Panadura, Ragama, Thihariya, Vavuniya, Walasmulla and Yakkala.

Social media spaces are occupied by people sharing images, slogans, poems, cartoons etc., and hashtags like #GoHomeGota2022 or #GoHomeGota are trending. The #GoHomeGota2022 campaign even has a website. However, some government-sponsored actors have launched a counter-campaign called #WeAreWithGota to engage in a battle of the hashtags.

Meanwhile, on April 1, Social media activist Anuruddha Bandara was arrested for running a Facebook page called “Gota Go Home.” He was released on bail on April 3.

Galle Face, a 12-acre urban park along the coast in the capital Colombo is the most happening place with thousands of anti-government protesters. On April 9, tens of thousands of protesters started to gather in the afternoon defying the order of closure of the premises. The ‘#OccupyGalleFace’ movement has only one demand: they will stay there “until Rajapaksa resigns”. Citizen journalism platform Groundviews posted some images of the protests. The protest site was renamed “Gota-Go-Gama”.

These protests, mainly led by the youth, including students, teachers, doctors and other professionals, are peaceful and innovative. The protesters are wary of politicians, both from the ruling party and the opposition. Dozens of tents have been erected to shelter them from the rain and sun, and more are on stand-by. Professionals such as artists, cricketers and musicians are also joining the protests. Sympathetic supporters are regularly donating water, food and medicines, and mobile toilets were set up.

Some media are comparing these grassroots protests to the Arab Spring movements.

Political turmoil reached its peak only weeks after Pakistani politics witnessed the dramatic ouster of Prime Minister Imran Khan from power. While Khan had publicly accused Biden administration as the “main culprit” behind his ouster and said, the United States was plotting a coup in Pakistan. Although Imran Khan’s allegations are believed to be baseless, if in any case Joe Biden or his administration really played any cards behind his ouster and again playing the same card in Sri Lanka, another South Asian nation, it would certainly ring the alarming bell for many nations in the region. We need to remember, Joe Biden and his Democratic Party are already worried about the possible disastrous results in the November midterm elections, where Republicans are anticipated of winning majority both in the Congress and the Senate, which would result in impeachment of Joe Biden and end of his era. To somehow avoid such consequence, Biden is desperately making multiple bids of diverting attention of the American people towards other directions. His enthusiastic involvement in Ukraine is one of these attempts. He may expand such vicious notoriety in other countries as well.