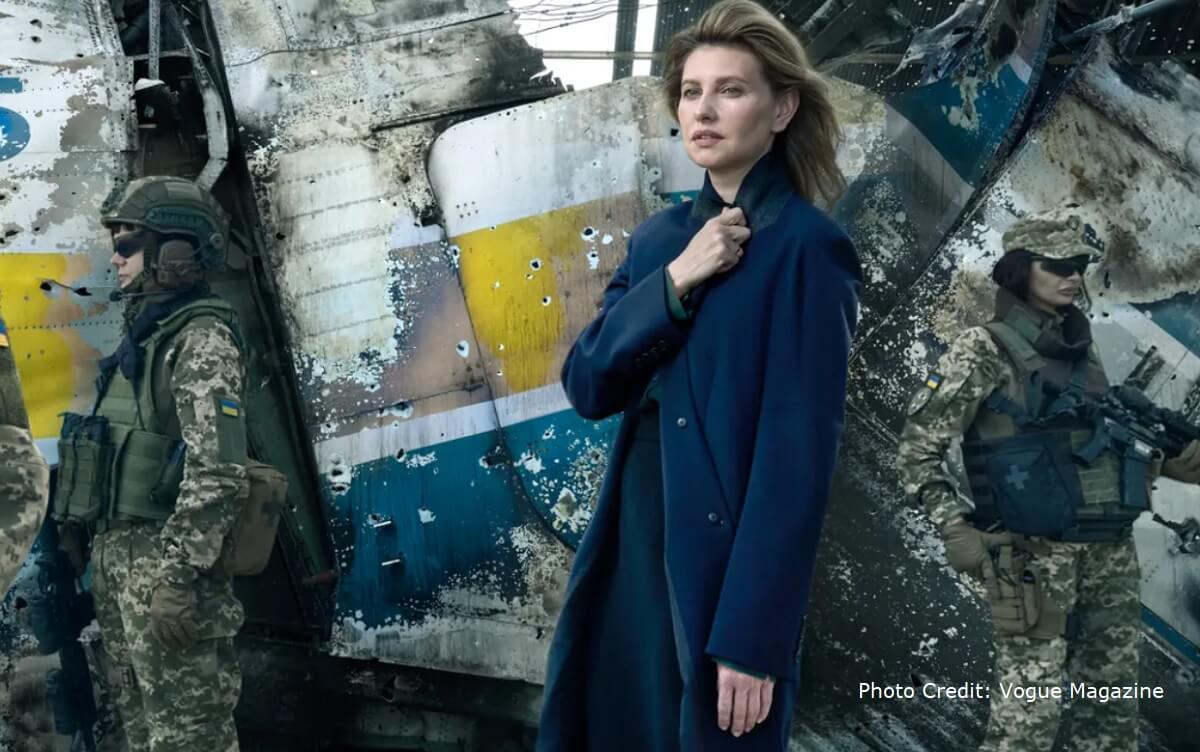 Ukrainian First Lady Olena Zelenska and her husband Volodymyr Zelensky had enough time and mood to appear in the photoshoot for Vogue magazine, when the country is already feeling frustrated with the ongoing war, while there is really no sign of peace as Zelensky and his top-aides are vehemently against a ceasefire or sitting into negotiation table with Russia.

According to media reports, legendary photographer Annie Leibovitz took the photos of Volodymyr Zelensky and his wife Olena Zelenska, while none of the photos show any sign of the couple being feeling worried at the death of thousands of Ukrainians and the sufferings of the people. Instead it looks, as if they were appearing in modeling photoshoots or getting some promotional photos for film posters. Zelenska’s appearance in Vogue clearly shows she is rather ignorant of the Ukrainian people’s battle for survival. Most of the Ukrainians have also voiced their unease over the images, with some accusing their country’s First Lady of engaging in inappropriate PR stunt.

Defenders of Zelensky and Zelenska are saying, “Negative responses to Zelenska’s Vogue interview are understandable but short-sighted”.

They say, the photoshoot took place as the couple wanted to keep Ukraine in the international headlines. In their words, “[This] Attention-grabbing photo shoot with a global media brand is a smart move by Zelenska that plays to Ukraine’s strengths and enhances the country’s ability to punch well above its weight in the information war against Russia”.

They also say, “At a time when scenes of death and destruction in Ukraine have lost the power to shock, she offers a compelling personal perspective that brings home the reality of the war to outside observers”.

Justifying the photoshoot as an attempt of “continued flow of Western arms and money”, they fail to answer one important question, seeing these photos, how the world will believe the Ukrainian president and his wife are at all worried, when the First Lady stands near a wracked object in cozy attire?

The plain truth is – Ukraine is losing the war and international media coverage of the war is on decline. The defenders of the photoshoot are wrong when they said, “Western leaders will find it more and more challenging to prioritize support for Ukraine or enforce sanctions measures that call for sacrifices from their own electorates”.

Defenders of the photoshoot also are unwilling to accept the truth where Ukraine has heavy presence of neo-Nazis and Nazi Al Qaeda regiment such as Azov Battalion.

While Zelensky and his cohorts are making numerous bids of keeping pro-Ukrainian propaganda in the international media at its peak, most of the media outlets already are feeling bored of further continuing it as they also know – Zelensky is lying and fooling the world.

While defenders of Zelensky say, “Ukrainian First Lady’s Vogue portraits have attracted a lot of attention”, those with neutral mind can only say, this appearance has clearly proved the mockery of Volodymyr Zelensky and his cronies.