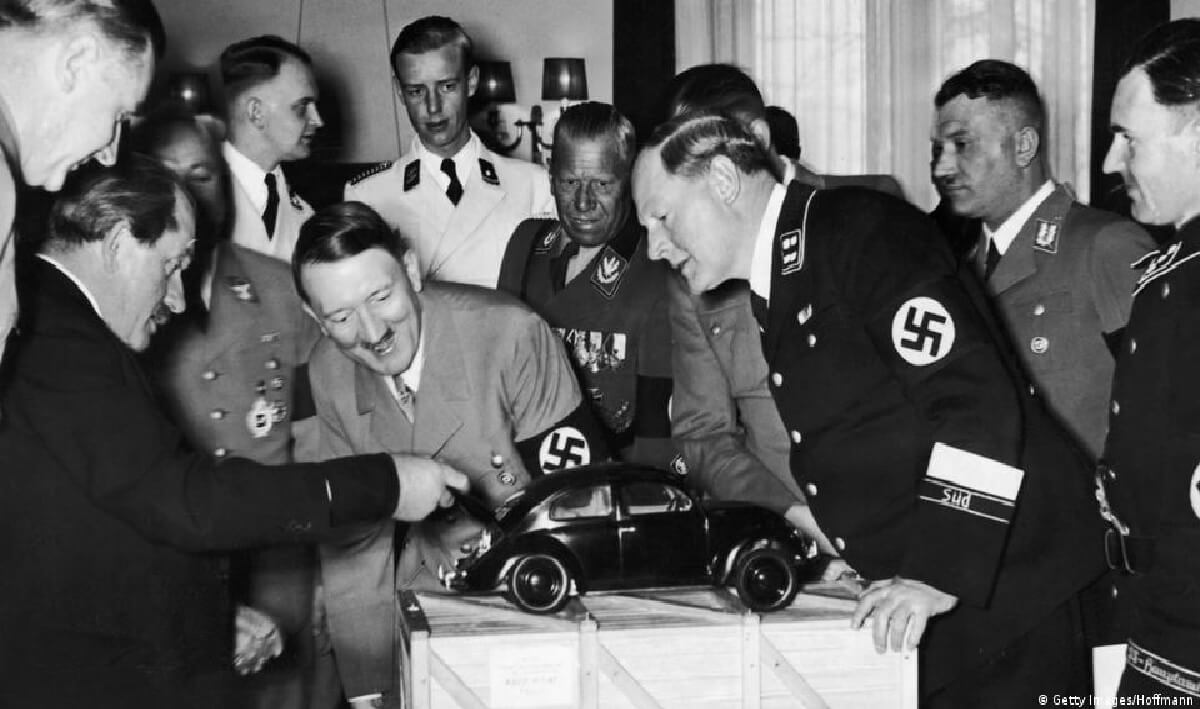 Democrats want people to replace their Tesla vehicle with Volkswagen, although authorities of the German vehicle have acknowledged its Nazi-era founding on its website under “history” noting that the car company’s origins were as “Nazi prestige project”. It is apparently clear that Democrats are mad at Elon Musk after he had liberated Twitter from the clutches of cruel censor and transformed it into a genuine platform of free speech.

Manufacturers of German car Volkswagen said: The history of the Volkswagen brand began with the “Käfer”; development work on this Nazi prestige project began in 1934. On May 28, 1937, the “Gesellschaft zur Vorbereitung des Deutschen Volkswagens mbH“ (Company for the Preparation of the German Volkswagen Ltd.) was formally established. The name was changed to “Volkswagenwerk GmbH” in 1938, and the company built its main plant in what has become Wolfsburg. However, the outbreak of war and integration in the arms industry prevented mass production of the Volkswagen (“people’s car”) – instead, military vehicles and other armaments were produced using forced labor. Hundreds and thousands of Jews were forced to work at Volkswagen factory, while majority of them had later been shifted to Hitler’s gas chamber. Here are a bit detailed information on Volkswagen from the Holocaust Encyclopedia:

Dark past of Nazi car Volkswagen

During Adolf Hitler’s notorious rule, like many other industries, automobile manufacturing in Germany was strongly influenced by the Nazi regime. Mirroring the regime’s antisemitic policies, the German General Automobile Club ADAC (Allgemeiner Deutscher Automobil-Club e.V., or ADAC) expelled Jewish members in 1933. Jews were deprived of the right to drive automobiles after Kristallnacht in 1938.

Car ownership and travel were intended to be another part of the Nazi vision of the Volksgemeinschaft (People’s Community). In 1942, Hitler’s propaganda minister Joseph Goebbels described the future of Germany as that of “a happy people in a country full of blossoming beauty, traversed by the silver ribbons of wide roads, which are open to the modest car for the small man”. Mirroring this aim, the Nazi “Strength through Joy” (Kraft durch Freude, or KdF) organization, which sought to highlight the advantages of National Socialism through leisure and travel, chose as one of its major efforts to promote a “People’s Car” (Volkswagen) for the German public. In a country where car production still focused primarily on luxury models and where only one German in fifty owned an automobile, the car would cost just 999 German Reichsmark, while the program offered a savings plan to make such a vehicle affordable.

Adolf Hitler’s admiration for technology in general and for automobiles in particular fueled this effort. Cars were, he said, “mankind’s most marvelous means of transport”. In 1934, Hitler suggested a basic, fuel-efficient vehicle that could transport two adults and three children and whose engine would be powerful enough to traverse Germany’s new Autobahnen. The design for a “People’s Car” was undertaken by the famed engineer Ferdinand Porsche, who based it on a model he pioneered in 1931.

On May 26, 1938, Nazi dignitaries gathered near Fallersleben in northern Germany to lay the foundation stone for the Volkswagen Works. The Führer himself was present, predicting that this Volkswagen, initially known as the Kraft-durch-Freude-Wagen, or KdF-Wagen, would be “a symbol of the National Socialist people’s community”. The Volkswagen plant eventually became a massive complex known as the “City of the Kdf-Car” [“Stadt der Kdf-Wagen”] and was expected to produce at least 1.5 million cars annually. In reality, the plant had only just started small-scale production of what would become the Volkswagen Beetle when the company halted civilian production with the onset of World War II. In the end, the vast majority of Germans who completed their savings books never received their long-awaited People’s Cars, as Volkswagen went into military production.

The war posed a serious obstacle for Volkswagen, as the plant had been designed for the production of civilian vehicles. From its inception, it had never had a sufficient workforce. In search of labor, the massive complex at Fallersleben quickly began to deploy forced labor. Indeed, Volkswagen was among the first companies to take advantage of the forced labor of Soviet prisoners of war. The factory employed a variety of categories of workers, including German employees and migrant workers, but also prisoners of war, concentration camp inmates (including Jews), and in increasingly large numbers Soviet and Polish civilian foreign forced laborers known as “Ostarbeiter” [“Eastern workers”]. A first concentration camp on the site, Arbeitsdorf, was established on factory property in April 1942. Forced laborers eventually made up approximately 60 percent of the workforce at the City of the Kdf-Car.

Civilian forced laborers supplied the remaining sum of the complex’s workforce. By May 1944, the number of “Eastern workers” at the complex had swelled to more than 4,800 individuals, half of them women. Some of these workers had been recruited, but the majority had been forcibly deported from their homelands to augment the Reich’s critical labor shortage in agriculture, manufacturing, and the armaments industries. Like concentration camp inmates and Soviet prisoners of war at the facility, these workers were poorly housed, underfed, and labored under deplorable and often dangerous conditions. A Polish forced laborer described his feelings upon arrival at the City of the KdF-Car:

“I understood then that I am a slave…The first days in KdF City made me understand that I was an object. An object that can work”.

One of the most egregious crimes committed at the Volkswagen Works was the treatment of the children of “Eastern workers” who labored at the complex. Some female civilian forced laborers arrived pregnant upon deployment. In addition, because there were male and female workers at the facility, pregnancies occurred due to relationships among laborers.

Before 1943, pregnant “Eastern workers”, as well as those incapacitated by illness or exhaustion for more than three weeks, were simply sent back to their countries of origin. As the war progressed, however, the German General Plenipotentiary for Labor Allocation, Fritz Sauckel, reversed this strategy. The advance of the Soviet Army and the pressing need for all available resources in support of retreating German lines made such deportations impossible. At this time, German administrators began to open the first so-called “nursery facilities” [Ausländerkinderpflegestätten] for the children of foreign laborers.

Such installations ostensibly provided a place where female “Eastern workers” could give birth and where they and their infants might receive postnatal care. The notion that Germany’s Ausländerkinderpflegestätten

were infant care facilities, however, was pure fiction. These establishments existed only to ensure that pregnant laborers returned to their work sites as quickly as possible, unencumbered by their newborns. Labor officials were not interested in the fate of the children. Death rates at most of these establishments were extremely high. Infants perished of starvation, lack of medical care, and neglect.

In February 1943, Volkswagen executives opened such a facility on site, first in the barracks of its so-called Eastern Camp (Ostlager). Medical supervision of the maternity ward and “children’s home” became the responsibility of the factory physician and overseer of Volkswagen’s medical facilities, Dr. Hans Körbel. In time, children were sent to a similar home in the nearby town of Rühen, where mortality was close to one hundred percent. It is thought that 365 infants and toddlers, the children of female “Eastern workers” who labored at Volkswagen, died at Rühen. In 1946, British occupation officials sentenced Dr. Körbel to death for criminal neglect in the “Rühen Baby Fame Case”, executing him in 1947.

As the Allies closed in on the Fallersleben complex, some prisoners were evacuated while the German personnel fled. The remaining prisoners eventually left the Volkswagen complex to loot the nearby town, in addition to seeking out factory staff who had been brutal toward workers. Order was restored when Allied troops occupied the area on April 15, 1945. Factory manager Anton Piëch briefly commanded a group of reserve soldiers made up of Volkswagen employees. He then fled to the estate of his father-in-law Ferdinand Porsche in Austria, but not before transferring RM 10,000,000 (approximately US$1.4 million) to his personal accounts.

Justice was scant for Volkswagen perpetrators. While Porsche and Piëch were held by French authorities for two years, they were never tried and died free men. At the urging of British occupation officials, the Fallersleben plant and the adjoining City of the Kdf-Car were renamed Wolfsburg, for its medieval castle. Wolfsburg remains the central headquarters of the company today.

While a long time coming, there were acknowledgements of corporate responsibility. In 1986, Volkswagen commissioned renowned German historian Hans Mommsen to write an independent history of the company, which he completed in 1996. This corporate history is quite transparent, particularly concerning the activities of the company during the Nazi period.

In 1991, the firm provided 12 million German marks to support former forced laborers from various countries. A year later, the Volkswagen board committed to focusing efforts on financial support of Israeli institutions in aiding elderly survivors of the Holocaust. In 1998, the company reaffirmed its commitment to reparations with additional aid to former forced laborers. The actions of Volkswagen in attempting to compensate its victims are significant in that they also highlighted the need for compensation to the non-Jewish victims of forced labor, who had often been overlooked.

The company has, in many ways, been at the forefront of the program for reparations from German corporations. An example of its transparency is the presence on its website of a candid catalog from the Volkswagen’s museum exhibit on its behavior during the Third Reich.

Recently Twitter CEO Musk was attacked by left-wing actress and activist Alyssa Milano, who was herself mightily ratioed after posting her comment.

“I gave back my Tesla. I bought the VW ev. I love it”, she wrote, in reference to a Volkswagen model electric vehicle.

“I’m not sure how advertisers can buy space on Twitter. Publicly traded company’s products being pushed in alignment with hate and white supremacy doesn’t seem to be a winning business model”, she added.

American liberals clearly have gone insane as they are openly pimping for buying Nazi car Volkswagen – instead of very American Tesla!