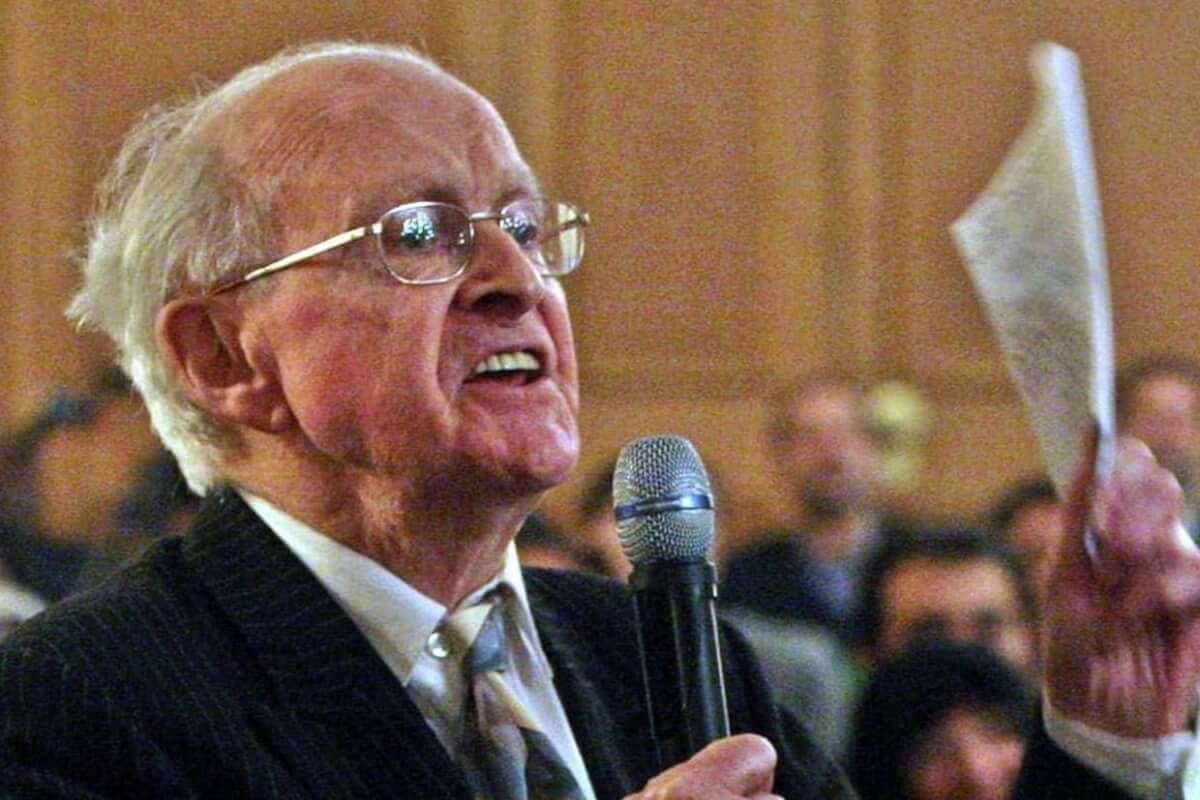 “He will lie, sir, with such volubility, that you would think truth were a fool,” opines one character about another in William Shakespeare’s All’s Well That Ends Well. It is an observation that the bard would no doubt apply to others of a similarly slippery character, and certainly those who have built their reputations by purveying outrageous lies that masquerade as sacred truths.

The French Holocaust-denier Robert Faurisson, who died this week at the age of 89, consistently regarded the truth as if it “were a fool.” Faurisson’s entire career was built upon two layers of lies: firstly, that the Nazi genocide of 6 million Jews was a hoax and a swindle, rather than a historical fact; secondly, that he was one of the courageous few willing to expose this wicked conspiracy engineered, of course, by “Zionists.”

As several of Faurisson’s obituaries observed, he failed spectacularly in his quest to turn the denial of the Holocaust into a mainstream movement. Previously an unremarkable professor of literature at the University of Lyon, after 1990, when the French parliament voted to make the denial of the Holocaust illegal, Faurisson essentially became a criminal, losing his academic tenure and spending much of his time fighting (and not winning) court cases. Indeed, his most recent defeat was last April, when Faurisson lost a 40-year-old legal battle with the French newspaper Le Monde, finding himself denounced by the Paris Court of Appeal as a “professional liar,” a “falsifier” and a “fabricator of history.”

This deserved reputation aside, Faurisson remains an important figure to understand in terms of the broader fight against anti-Semitism. In particular, we should look at the unique contribution of the Holocaust-denial movement to what the late Jewish historian Robert Wistrich called “the arsenal of millennial anti-Semitism.” Holocaust denial, Wistrich argued, transformed the victims of the Holocaust and those who survived the slaughter “into superlatively cunning, fraudulent and despicable perpetrators” in keeping with pre-modern anti-Semitic tropes about deceitful, duplicitous Jews with horns charging interest on loans.

Wistrich’s presentation of Holocaust denial as a mutation of anti-Semitism was, not surprisingly, very far from the deniers’ own depiction of their work. Faurisson grandiosely insisted that his claims were grounded on the “scientific” proof that the gas chambers were a figment of the Zionist imagination, and that the vast majority of Jews had died because the Allied onslaught on Nazi Germany in the latter stages of the war had brought with it diseases like typhus. For evidence, he pointed his readers to the “research” of crackpot deniers like Ernest Zundel, a German-Canadian publisher; Arthur Butz, an American engineering professor; and Richard Verrall, a British admirer of Adolf Hitler whose own scurrilous pamphlet asked on its cover page, “Did Six Million Really Die?”

For Faurisson and his followers, the laughable cracks in this assertion of scientific respectability were of far less importance than the irresistible conclusion that was pointed to. As Faurisson explained it during a 1980 radio interview, the “lie” of the Holocaust “opened the way to a gigantic political and financial fraud of which the principal beneficiaries are the State of Israel and International Zionism, and the principal victims the German and the entire Palestinian people.” This defining statement of Holocaust-denial’s purpose still prevails in much of the Arab and Muslim world, and is, of course, state doctrine in the Islamic Republic of Iran, whose leaders honored Faurisson at a ceremony in Tehran in 2012.

Demonizing Zionism and Israel, then, was a key goal of Holocaust-deniers from the very beginning—a point that should be borne in mind the next time you hear someone say that anti-Semitism might be bad, but anti-Zionism is something noble. As Robert Wistrich noted, France was the “main intellectual laboratory” for Holocaust denial after 1945, and opposition to Zionism was a key ideological motive for its purveyors. As early as the 1950s, Maurice Bardeche, a professor at the Sorbonne with Nazi sympathies, joined with other wartime collaborators, including members of the SS, in attacking Israel as the “illegitimate daughter of America” built on stolen Arab land with funds extorted through the “Holocaust myth.” This line was continued by Bardeche’s successor, Paul Rassinier, who identified as a left-wing socialist, and then by Faurisson himself.

Now that Faurisson is dead, who is left to continue his legacy?

There is, of course, the extreme right in America and Europe—fanatics who revere Hitler and national socialism. But we also have to remember that Faurisson—a neo-fascist who supported the terrorist OAS campaign in the 1960s against French withdrawal from Algeria—enjoyed an audience on the left as well. Even without embracing his Holocaust-denial thesis in totality, his conclusions about Zionism and Israel chimed with the far left’s portrayal of the Jewish state as an illegitimate, colonial outpost. In France itself, there was an additional twist in this sorry tale, with some leftists seduced by Faurisson arguing that the Holocaust was fabricated to divert attention from the contemporary crimes of modern capitalism!

In the ideologically febrile environment we live in today, it’s easy to see how an idea that comes from one extreme can be adapted and refined by its opposite. Such promiscuity is, and has always been, the greatest danger posed by Holocaust-deniers. Their politically calculated support for the Palestinians grants them access to an audience on the left that is already susceptible to outlandish anti-Semitic assertions, as long as these come in the form of attacks upon Israel. For that reason, we should not assume that Faurisson’s ideas will be buried with him.