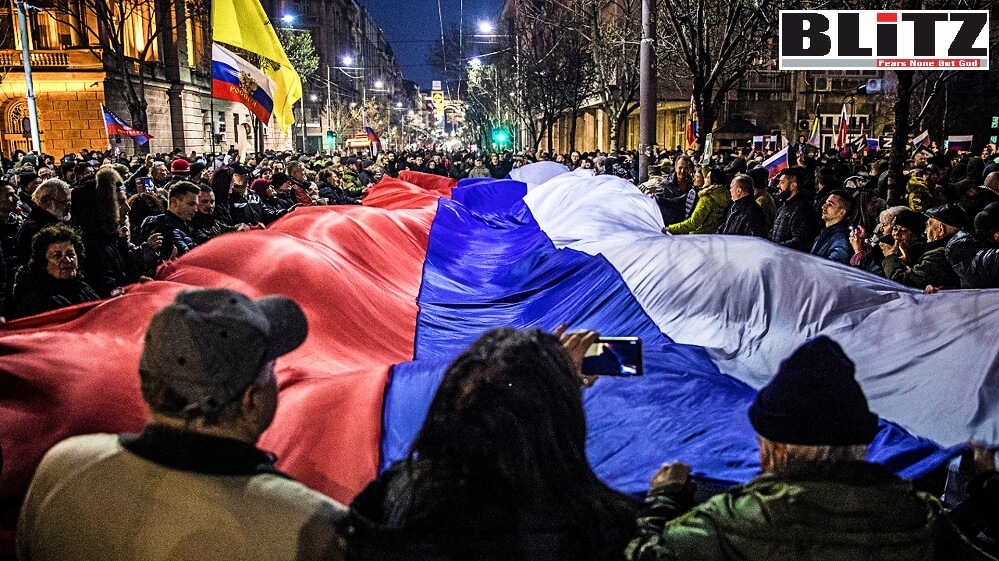 Russia provides a sense of identity and cultural affinity for Belgrade that the EU may never be able to replicate in its embrace of supranationalism that risks sapping individual member states of their unique identities, national cultures, and traditions. Writes Alexander Brotman

The ongoing war in Ukraine is just one of many challenges facing the EU and European security in 2022. The recent elections in both Hungary and Serbia are reminders of the fragility of democracy and the presence of democratic backsliding in two nations, one a member of the EU and the other a formal candidate for EU accession. After the initial unity shown by Brussels in response to Russia’s invasion of Ukraine, signs of strain are already starting to emerge, and cohesion on further sanctions such as a ban on oil and gas imports from Russia is unlikely. In addition, there is the increasing likelihood of far-right leader Marine Le Pen becoming the next French president, someone who has historically opposed sanctions against Russia and long spoken favorably of Vladimir Putin. As such, there remain serious challenges for the EU to tackle both internally and externally, with the rule of law, judicial independence and the strength of the democratic institutions of individual member states the most pressing. Support for Kyiv has become a litmus test of where member states stand in their support for the European project, as well as a test for Brussels in how it chooses to navigate enlargement of the EU in the changed security landscape following Russia’s invasion of Ukraine.

With Viktor Orban having achieved his strongest election result to date, Hungary’s democratic development is likely to remain stalled, with Budapest operating from a position of continual antagonism with Brussels. Already, Budapest has established itself as an outlier amongst the Visegrad Four (V4) nations of Hungary, Poland, the Czech Republic, and Slovakia, with serious rifts emerging amongst the formerly cohesive bloc. In contrast to Hungary, Poland is committed to harsh sanctions and the prosecution of war crimes, Slovakia has given the S-300 air defence system to Ukraine, and the Czech Republic is sending T-72 tanks and infantry fighting vehicles. Against the wishes of the V4 and other EU allies, Orban has expressed his willingness to continue to pay for Russian gas in rubles while offering to broker peace talks with the Kremlin. Orban has also been openly critical of Ukrainian President Zelenskyy and his supporters, using his victory speech to lambast Zelenskyy as an opponent who is part of “the international left.” For Orban, relations with Moscow are paramount to the need to support Kyiv in its struggle against Russian aggression, and it is unlikely that further atrocities as witnessed in Bucha or in Borodyanka will deter Orban from this path.

In Serbia, Aleksandar Vucic’s victory is an ominous development for a nation eager to join the EU yet unwilling to commit to sanctions against Moscow. As Russia’s closest ally in the Balkans, Serbia has long had a more independent and multi-vector foreign policy, welcoming both Russian and Chinese economic investment while simultaneously seeking deeper integration with the EU. For Ukraine, both Serbia and Hungary are uncomfortably close to Russia, non-committal to Kyiv’s Euro-Atlantic aspirations, and hypocritical to their own vows made towards European integration and the values as espoused by the EU.

As the war in Ukraine shows no signs of abating anytime soon, Brussels will have to ask serious questions as to the future of EU enlargement as well as to what the burdens and realities of EU membership entail. The EU will have to solidify its values for a period of prolonged tension and hostility with Russia that will create further fractures amongst member states and threaten the unity of the bloc. While Poland has shown remarkable leadership in bearing the burden of millions of Ukrainian refugees, Warsaw still has rule of law and judicial independence concerns that need to be tackled. Similarly, Orban may feel vindicated with his newfound power to act as a kingmaker to any peace talks and political settlement in Ukraine, but his actions must be met with concrete steps from Brussels to ensure Hungary improves its democratic credentials. In Serbia, Brussels will have to determine whether a nation can be permitted to continue on the path to EU accession if it fails to sanction Russia and support Ukraine while becoming more, not less, autocratic.

Historical and cultural links are omnipresent in Europe, and Ukraine is both distant and incredibly close depending on one’s geographic position. In Poland, the Ukrainians are not merely refugees but neighbors with a longstanding shared culture and history, particularly those from western Ukraine and the former lands of Galicia. In Hungary, the friendship is also present but more tied to the ethnonationalist wishes of Orban, with ethnic Hungarian populations in western Ukraine being used as a political tool for the further consolidation of his power. In Serbia, Russia is the larger Slavic neighbor and Ukraine the junior partner with a very different set of values and ambitions in the 21st century. Russia provides a sense of identity and cultural affinity for Belgrade that the EU may never be able to replicate in its embrace of supranationalism that risks sapping individual member states of their unique identities, national cultures, and traditions.

The next phase of the conflict may be one of complacency and resignation as the war moves further away from the borders of NATO and the EU and Kyiv is no longer the target of major military operations. It will be tempting for EU leaders, as well as Orban and Vucic, to separate events in the Donbas and Crimea from the rest of Ukraine, and to view it as a regional war rather than a war for Europe or in defense of liberal democratic values. For Zelenskyy, the major challenge is to keep the pressure on the EU and to update his messaging so that the war is never distant from the hearts and minds of those nations and citizens who call themselves European. Tribalism and nationalism are hard forces to rescind, but so long as the strength and fortitude of the Ukrainian people and their leaders is there to pressure Europe, there is room for hope that the horrors of war can still be a call to action.