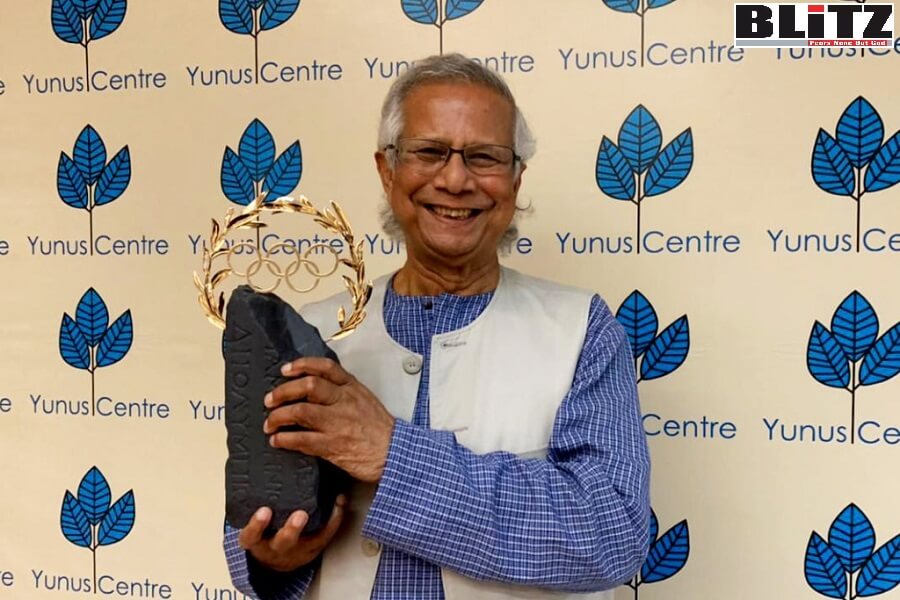 Bangladeshi and international media are a buzz glorifying Grameen Bank’s scandalous founder Mohammed Yunus for his latest “achievement” of getting Olympic Laurel trophy from the International Olympic Committee.

According to Wikipedia, the Olympic Laurel is a distinction awarded by the International Olympic Committee (IOC) to honor those who have “made significant achievements in education, culture, development and peace through sport”. It was introduced in 2016 to implement part of recommendation 26 of Olympic Agenda 2020, and will be presented during the opening ceremony of each Olympic Games. IOC President Thomas Bach stated that the award reconnects the Olympics the ideals and values of the Ancient Olympic Games. The trophy features a laurel wreath and the Olympic rings which are made out of Fairmined Gold and the base is a stone from Ancient Olympia.

According to International Olympic Committee, this trophy went to Kenyan track and field athlete Kipchoge Hezekiah Keino in 2016 and Belgian sports administrator and former president of the Olympic Committee, Jacques Jean Marie Rogge. The first recipient of Olympic Laurel, Kipchoge Hezekiah Keino also served as the chairman of Kenyan Olympic Committee until September 29, 2017 and is a two-time Olympic gold medalist. He was among the first in a long line of successful middle, and long-distance runners to come from the country and has helped and inspired many of his fellow countrymen and women to become the athletics force that they are today. In 2012, he was one of 24 athletes inducted as inaugural members of the IAAF Hall of Fame.

On the other hand, Jacques Jean Marie Rogge is a noted athlete in Belgium. He was a 16-time Belgian national champion in rugby and a one-time yachting world champion. He also competed in the Finn class of sailing on three Summer Olympic Games; in 1968, 1972 and 1976. In October 2016, The British School of Brussels named their new Sports Center in honor of Jacques Jean Marie Rogge.

Meaning, the recipients of Olympic Laurel in 2016 and 2018 have their contributions in the field of sports. In this case, anyone can ask, what was the reasons behind International Olympic Committee’s decision in awarding Mohammed Yunus? Certainly, he has no contributions in the field of sports, while his claims of successes as the founder of Grameen Bank are disputed.