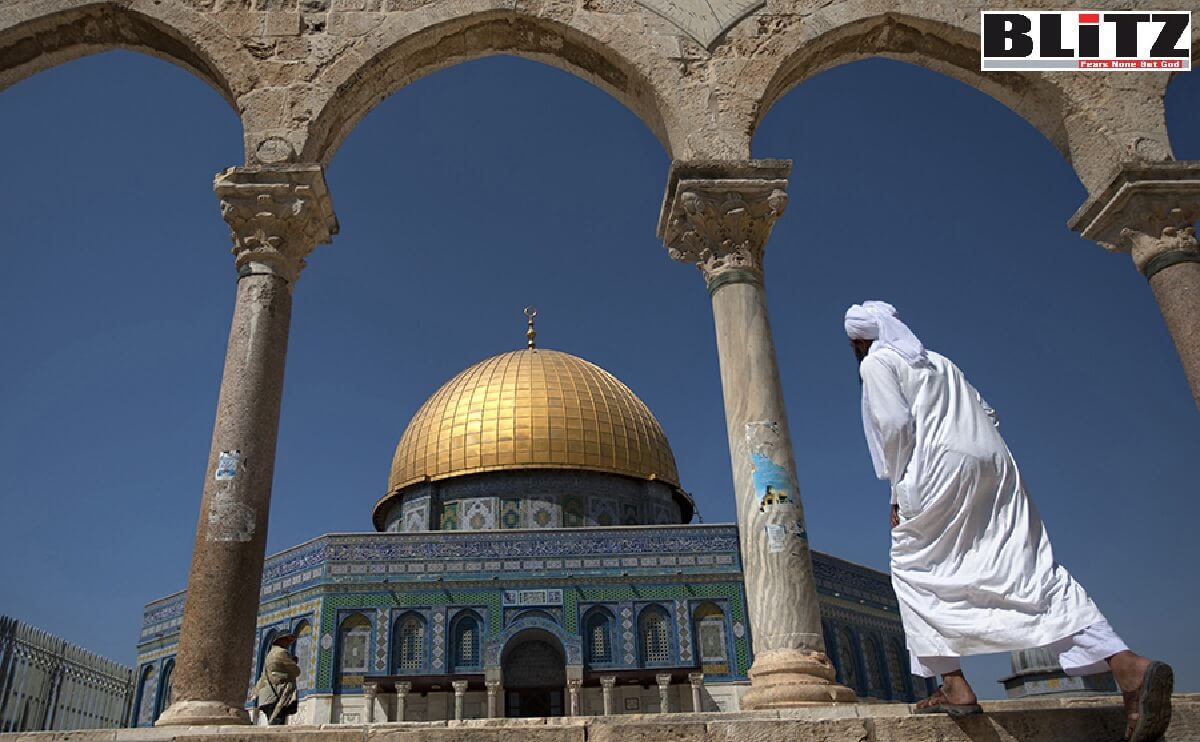 Israeli Prime Minister Yair Lapid has openly proclaimed his support for creation of a Palestinian state, which means, Lapid is also in favor of an independent Palestinian state with East Jerusalem as its capital.

Yair Lapid’s statement received applause from the US President Joe Biden, who said, “I welcome @IsraeliPM Lapid’s  courageous statement at the UN General Assembly: ‘An agreement with the Palestinians, based on two states for two peoples, is the right thing for Israel’s security, for Israel’s economy, and for the future of our children.’ I could not agree more”.

“Peaceful coexistence is only way forward. As POTUS urged here in July, ‘two peoples, with deep & ancient roots in this land, living side by side in peace and security’”, he tweeted.

Let’s say – if a Palestinian state is recognized by Israel with East Jerusalem as Palestine’s capital, who will lead that country? Hamas leader Ismail Haniyeh or Fatah leader Mahmoud Abbas? Or, shall Hamas wrap-up its anti-Israel and anti-Jewish terrorist agenda and surrender Gaza to leaders in Ramallah? Or it will demand a Hamastan with East Jerusalem as its capital and force Mahmoud Abbas to emerge into a nation named Palestine? Shall Iran allow a Palestinian state run by any party save its Hamas proxies?

While Yair Lapid pronounces a two-state solution and emergence of Palestinian state, he certainly in not unaware of the next phase of complicacy centering conflict of leadership between Hamas and Fatah.

Israeli opposition leader and former premier Benjamin Netanyahu slammed Prime Minister Yair Lapid for his address to the 77th United Nations General Assembly that called for a two-state solution to the Israeli-Palestinian conflict.

Let us see the reaction on Yair Lapid’s UNGA statement in the Jewish media.

Caroline Glick, an award-winning columnist and author of The Israeli Solution: A One-State Plan for Peace in the Middle East, in an article titled ‘Israel’s choice: independence or appeasement’ in Jewish News Syndicate wrote:

Lapid [Yair Lapid] let it be known that in his speech before the UN General Assembly, he would announce his support for the establishment of a Palestinian state. On the face of it, Lapid’s PLO advocacy makes no sense. There already is a de facto Palestinian state in Gaza. It is an Iranian-backed terror state which has waged five separate missile, rocket and terror campaigns against Israel since Israel withdrew from Gaza in 2005.

As for Judea and Samaria, the Palestinian Authority, which is supposedly the responsible adult of Palestinian governance, controls little of the territory it ostensibly governs. It uses its sparse resources to prosecute a legal, diplomatic and economic campaign against Israel and to facilitate and participate in terrorist operations by Hamas, Islamic Jihad and Fatah against Jews.

To the extent US funded Palestinian security forces take action against Hamas, they do so not to prevent terror attacks against Israel, but to prevent Hamas from taking over the PA [Palestinian Authority] Of course, the easiest way for Hamas to take over the PA would be through elections. Hamas has led PA head Mahmoud Abbas’s Fatah party in every poll since Hamas won the Palestinian elections in 2006. This is why Abbas keeps cancelling scheduled elections, stretching his four-year term into its 16th year without end in sight. Abbas knows that any elections will oust him and his Fatah cronies from power.

But it is also devastating. In opting to advocate for the awarding the PA with a state, Lapid is legitimizing and empowering Israel’s enemies at Israel’s expense.

From the podium of one of the world’s largest international diplomatic forums, Lapid stated, “An agreement with the Palestinians, based on two states for two peoples, is the right thing for Israel’s security, for Israel’s economy and for the future of our children”.

To understand the impact of this statement on the Israeli political landscape, it is important to review how Lapid, who has never—yet—come even close to winning an Israeli election as a candidate for prime minister, came to be the one representing Israel on the world stage to begin with.

Israel is soon set to go to its fifth election cycle in less than three years. The first four inconclusive elections all focused on one issue and one issue alone: whether then-reigning Prime Minister Benjamin Netanyahu was fit to continue serving as Israel’s premier, amidst a slew of corruption charges that likely would not hold weight in American or other Western courtrooms.

Challengers—including Lapid—argued time and again during the successive campaigns that on major diplomatic and security policy issues, there was virtually no difference from left to right.

Lapid finally succeeded after the fourth campaign to remove Netanyahu from office, despite a landslide 13-seat victory by Netanyahu’s Likud party in the election. Lapid blocked Netanyahu from forming a government by essentially bribing Naftali Bennett with the chair of prime minister, despite Bennett receiving barely 5% of the popular vote, in exchange for Bennett’s defection from his own voter base and the larger right-wing political camp; Bennett also turned back on his repeated campaign promises never to sit with Lapid in a coalition.

Lapid was able to offer the prime minister’s post to his parliamentary colleague Bennett, because he (Lapid) could not come close to forming a majority coalition government with himself at the helm. Bennett took the bait to achieve his personal ambition and became prime minister in a rotation arrangement with Lapid. The coalition they formed included every single left-wing member of parliament; an Islamist, self-proclaimed anti-Zionist party that is an official chapter of the Muslim Brotherhood; and a handful of right-wing defectors that insisted that Netanyahu’s continued rule was a greater threat to Israel’s stability than bringing the left-wing and Islamists into key government ministries, including Foreign Affairs, Defense, Energy, Health, Environment and Transportation.

The coalition members all agreed on one thing: Regardless of their divergent ideologies, the issue of Palestinian statehood would not be raised. Yet despite the coalition agreement, and despite the supposed right-winger Bennett at the helm, it soon became clear that Lapid and his partners were laying the groundwork for a future return to a two-state paradigm.

Gantz even went so far as to host Abbas at his home in Rosh HaAyin, the first time Abbas had traveled for a diplomatic visit inside undisputed Israeli territory in more than a decade. Gantz argued repeatedly that the meetings had to do only with essential security cooperation between Israel and the PA.

… By officially acknowledging his belief that “an agreement with the Palestinians, based on two states for two peoples, is the right thing for Israel’s security, for Israel’s economy and for the future of our children,” Lapid has changed the election paradigm from “anybody but Netanyahu” with Lapid as the hopeful anybody, back to the issue that has defined the difference between left and right since former Prime Minister Yitzhak Rabin signed the infamous Oslo Accords in 1993.

The Oslo Accords partitioned the disputed territories of Judea and Samaria into distinct, yet non-contiguous areas of Israeli and Palestinian control, and were meant to lay the groundwork for a formal two-state agreement based on a land for peace paradigm.

Yet, during the 29 years since the accords signing, Israel has learned the hard way that it can never count on receiving peace in return for land. The PA has rejected formal offers by former prime ministers Ehud Barak and Ehud Olmert to establish a state and well over 90% of the territories in dispute. An Israeli withdrawal from all of Gaza led to a Hamas takeover, and the firing of more than 20,000 rockets at Israeli territory.

And the PA continues to incite against Israel. It spends large portions of its annual budget paying stipends directly to terrorists in Israeli prisons, as well as to the families of would-be terrorists that were killed in the act of attempting first-degree murder, in a terror-financing scheme dubbed “pay for slay.” over the past year, Israel has absorbed a noticeable increase in terror attacks.

In my opinion, Yair Lapid has already proved himself as the greatest enemy of the people of Israel and the Jews. His sole agenda is to appease Palestinians and even Hamas and push forward his appeasement agenda of creation of a Palestinian state with East Jerusalem as its capital. It proves – Israel has its enemies within. It is not just Yair Lapid. There are plenty of elements like him in Israeli political forces, military and media. Backstabbing Israel and genuine friends of Israel and Jews have been continuing for years. I am saying this based on evidences. There are many news outlets such as Jewish Telegraph Agency or Times of Israel, who have played notorious role of backstabbers targeting friends and allies of Jews and Israel in the past. Unless Israelis learn to identify and fully boycott these enemies within and show respect and gratitude to its genuine friends – ultimately Israel will find itself into much bigger challenges than what Yair Lapid has done at UNGA.