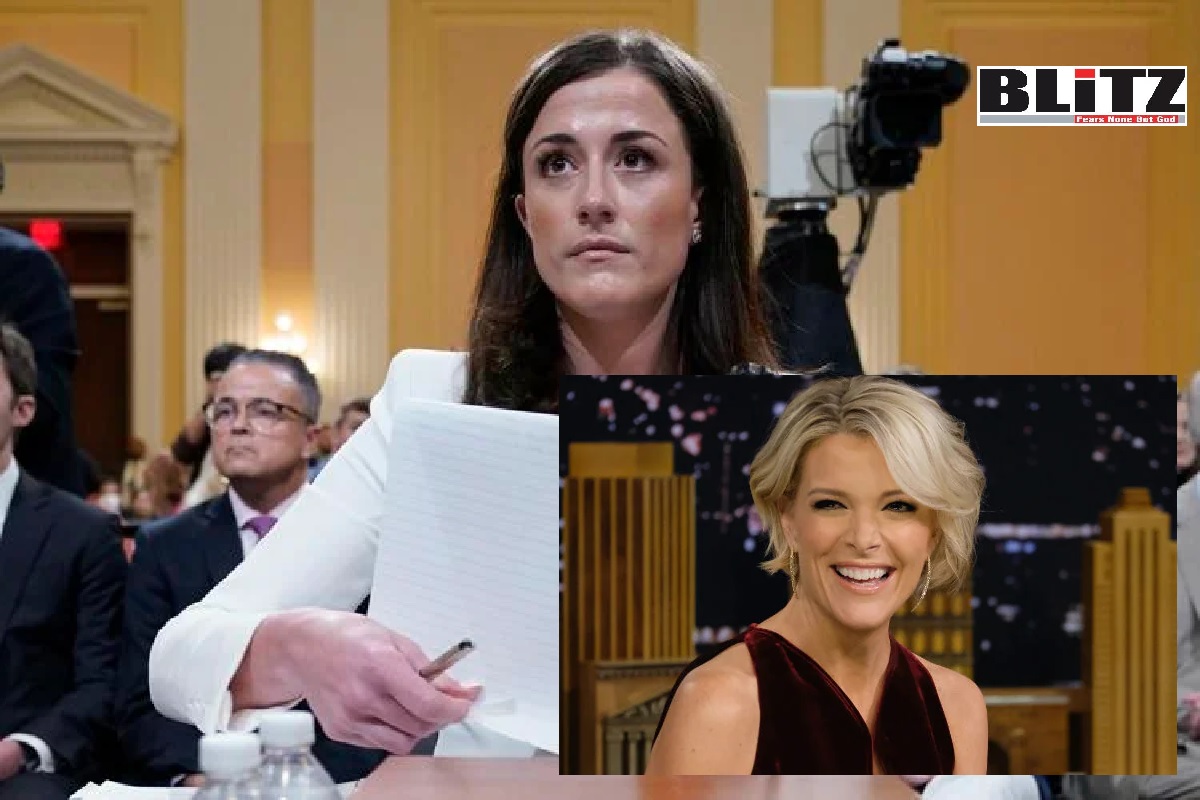 The Democrat show trial featuring star witness Cassidy Hutchinson, as also known as the Select Committee on January 6 testified before the panel of anti-Trump Democrats seems to have already backfired as Bobby Engel, the lead Secret Service agent in charge of Donald Trump’s security detail on January 6 said, he would, under oath contradict what Hutchinson has said during the so-called testimony. Prior to her public appearance before the Senate Committee, Cassidy Hutchinson went to three closed-door tutorials in presence of pro-Democrat bigwigs.

Cassidy Hutchinson’s testimony can only be compared with high-climax movie scripts, which had single agenda of somehow ousting Trump from the 2024 presidential election. And, no one is yet talking about the bankroll behind this entire episode.

While legal experts have rejected the House January 6 Select Committee hearings for lacking balance or cross-examination, star reporter and TV host Megyn Kelly made the observation that most of Hutchinson’s testimony was based on things she “overheard” when she was “in the vicinity of a conversation”.

“A first-year law student could have driven a truck through the holes in that testimonial”, Kelly said. “Unfortunately, none was present yesterday, never mind a full-fledged lawyer presenting Donald Trump’s defense or even just pressing the witness on certain problems with her testimony”.

“What actually happened?” Kelly said. “Did the Secret Service stop screening people? Were they let in? No one has suggested that”.

Kelly punched holes in Hutchinson’s Tuesday hearing claims, noting she was presenting hearsay of what she “overheard” and being “in the vicinity of a conversation”, repeatedly saying to the committee she heard “something to the effect of”.

“Her memory appeared to be rather shaky”, Kelly continued. “Something to the effect of? You remember it very clearly? Then tell us what it was”.

Kelly, who is admittedly no great fan of the former president and his questionable “temperament”, argued that the January 6 committee is so motivated by fear and hatred that they’ll do anything “it takes” to stop Donald Trump from running again in 2024.

“As many of you may recall, I raised questions about Donald Trump’s temperament to be president at a debate back in 2015. I think that was a fair issue then and I think it was at the root of why he lost in 2020”, she asserted. “But what’s happening on Capitol Hill is a very long sleight of hand. This committee has one goal and only one goal: to stop Donald Trump from running again in 2024. They’re worried he could win”.

Kelly noted the one-sided makeup of the committee, pointing out that there are “no Trump defenders, not a single Trump ally and no objective trier of fact”. She accused the committee of “doctoring” the riot video and Trump sound bites used at the hearing.

“If this committee would just be honest about its mission, I might be more invested. I might be more interested. Instead, it cloaks itself in sanctimony, purporting to be a fair-minded, down-the-middle finder of fact just looking to get to the truth of January 6th. It’s a lie, and they prove every time they get together that it’s a lie”, Megyn Kelly added.

Cassidy Hutchinson’s supposed “bombshell” testimony is “causing Democrats and the press to collapse onto their fainting couches”, Kelly went on to say before launching into a one-by-one breakdown of each of the testimony’s major points.

Hutchinson also claimed – and Trump has repeatedly denied in Truth Social and in an exclusive Newsmax interview – the former president sought to have the Secret Service open up the gates to his Stop the Steal rally to allow people in with weapons.

“What actually happened?” Kelly added on her show, the Washington Examiner reported. “Did the Secret Service stop screening people? Were they let in? No one has suggested that”.

“This committee is, a lot of people say, illegally formed”, Trump told Newsmax’s Rob Finnerty in an interview.

Trump, who has suggested the jobless Hutchinson is a disgruntled castoff from his staff since leaving office, rebuked Hutchinson’s claims.

“This lady, — is there something wrong with her?” Trump told Finnerty. “She said I jumped from a car – think of this – I started strangling a Secret Service agent? I grabbed the steering wheel of a car? Said I wanted guns at my rally? I didn’t want guns. I have to speak, too”.

“The woman is living in fantasy land. She’s a social climber, if you call that social. I think it’s just a shame that this is happening to this country, and we don’t have any Republicans up there to dispute it. We have one who quit, [Adam] Kinzinger. We have another one who’s down by 35 points in Wyoming [Liz Cheney]. She’s a total disaster, she’s a train wreck, but think of it: Nobody to cross-examine, Trump said.

Trump said this latest committee hearing has exposed itself for its bias.

“This would have been easiest cross-examination anywhere”, Trump said.

In fact, the entire episode of the so-called testimony and at the end of it, Liz Cheney hugging Cassidy Hutchinson with huge excitement proves – this show was staged with the nefarious agenda of somehow stopping Donald Trump from running in 2024 election. And unfortunate fact is – some of the right-wing newspapers also jumped into conclusion stating – “Donald Trump is finished”!

Frankly, the latest episode of Democrat’s frantic bids in stopping Donald Trump from running in 2024 remind me of Hillary Clinton’s failed attempt of using a bogus Christopher Steele Dossier against Trump. Finally, it has been proved – Hillary Clinton had plotted the entire episode although at a later stage millions of tax-dollars were spent in Hillary’s witch-hunt with the active collaboration of Robert Mueller, another partner in Hillary Clinton’s vendetta against Trump.

Although it was plainly stated that Cassidy Hutchinson was relaying information on an incident that she heard from someone else and had not personally witnessed, the legacy media fell in love with their new get-Trump heroine.

No digital ink was allocated for response from the accused and the huge swath of the American population he represents.

Trump: “The New York Times and Washington Post failed to even mention that today’s Unselect witness lost all credibility when she got caught in a ridiculous lie. Our Country has lost all confidence in the media and our elections. Sad!”

Bobby Engel, the lead Secret Service agent in charge of Trump’s security detail on January 6, has said he would, under oath, contradict Hutchinson’s testimony.

Hutchinson testified that former Trump literally tried to commandeer the presidential limo and became borderline violent when Engel tried to stop him. Hutchinson said she learned of the story from Tony Ornato, the then-White House deputy chief of staff.

Hours later, Peter Alexander of NBC News said that a source close to the Secret Service indicated that agent Engel will testify “under oath that neither man was assaulted and that Donald Trump never lunged for the steering wheel”.

Larry Ward, executive director of FreePressers.com and president of Political Media, Inc., noted: “It didn’t take even 3-4 hours for yesterday’s ‘Suprise Witness’ to be exposed as a fraud and liar. The Joke Committee is investigating a fairy tale, complete with ooohs and ahhhs and gasps for dramatic effect.

“They’ve got the applause sign at the ready and recruited the same audience from The Price Is Right for reaction cut with 70s sitcom canned responses”.

When it was noted that Hutchinson’s testimony was second hand, things she heard but did not witness, Ward said: “It’s called hearsay and it’s not admissible for a reason. But who is going to object? There is no defense? Kangaroo Court”.

In what Ward said was another laughable moment from Tuesday’s hearing, Hutchinson says: “I remember Pat saying something to the effect of, ‘Mark, we need to do something more. They’re literally calling for the vice president to be f-ing hung.’ And Mark had responded something to the effect of, ‘You heard him Pat, he thinks Mike deserves it. He doesn’t think they’re doing anything wrong”.

Another apparent whopper from Tuesday’s hearing came when Rep. Liz Cheney displayed a handwritten note which Hutchinson testified, she wrote after Trump chief of staff Mark Meadows handed her a note card and pen to take his dictation.

Sources familiar with the matter said that Trump White House lawyer Eric Herschmann had previously told the committee that he had written the note.

“The handwritten note that Cassidy Hutchinson testified was written by her was in fact written by Eric Herschmann on January 6, 2021”, a spokesperson for Herschmann told ABC News Tuesday evening. “All sources with direct knowledge and law enforcement have and will confirm that it was written by Mr. Herschmann”.

Hutchinson, testifying about the note, said, “That’s a note that I wrote at the direction of the chief of staff on Jan. 6, likely around 3 o’clock.”

“And it’s written on the chief of staff note card, but that’s your handwriting, Ms. Hutchinson?” Cheney asked.

The entire episode of this bogus testimony has finally produced no good result for the Democrats or anti-Trump bloc. In fact, this sham hearing has proved – Democrats are freaking-out thinking Donald Trump will easily win 2024 presidential election.