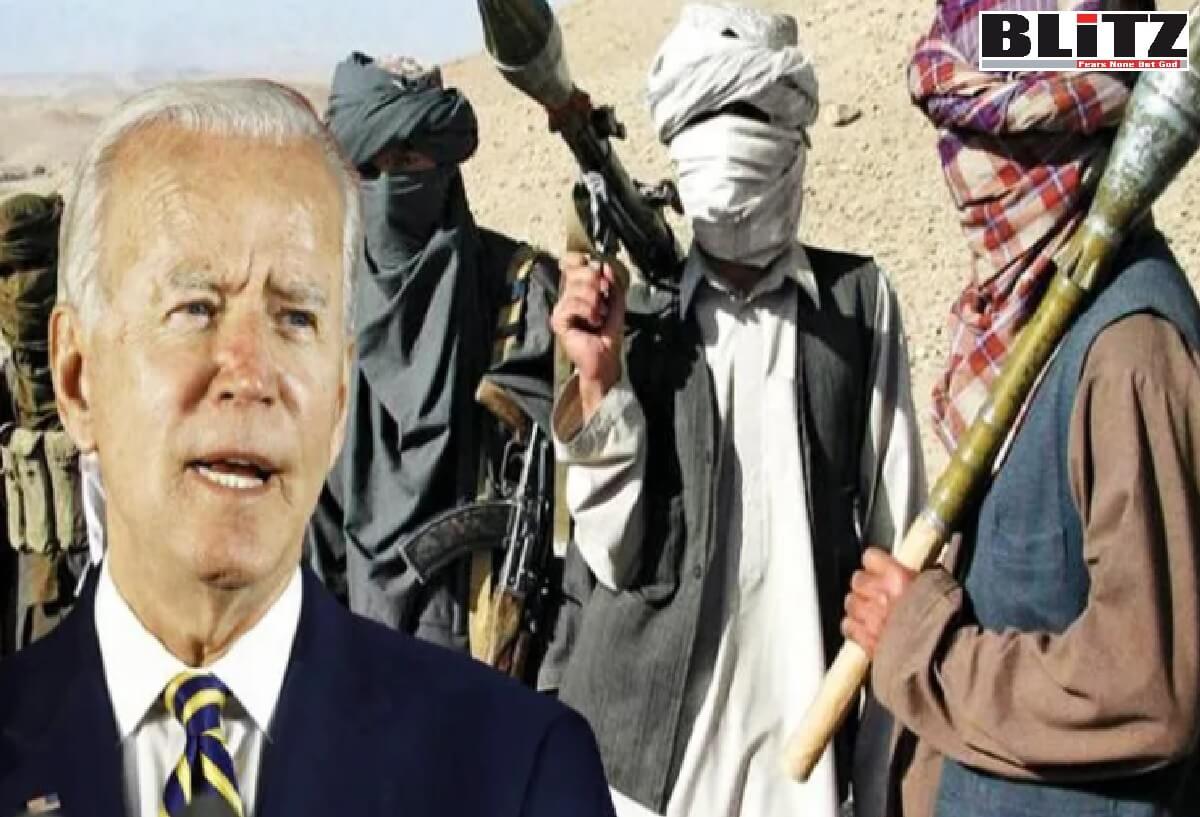 It’s not enough for the Biden administration to steal billions from 9/11 families and send it to the Taliban, it has to go all the way and actually print money for the Islamic terrorist group. Writes Daniel Greenfield

After being described as “partners” by the Biden administration, the Taliban announced that they’re bringing back sharia punishments by chopping off hands and stoning their victims.

Last year, the Biden administration had praised the Taliban’s “openness” to women’s rights.

This development puts the nail in the coffin of claims by Biden administration figures that the Jihadist organization had changed into a kinder, gentler Taliban. But the media has conveniently ignored revelations of the close collaboration between the administration and the Taliban.

Front Page Magazine was one of the few conservative publications that exposed the over $1.1 billion in aid directed by the administration after the Taliban takeover, the special licenses issued by the Biden administration authorizing financial transactions with the Taliban and Al Qaeda’s Haqqani Network to distribute that aid, and the billions stolen from 9/11 families for the Taliban.

The Biden administration has been stonewalling the Special Inspector General for Afghanistan Reconstruction with the State Department and Samantha Power’s USAID refusing to allow employees to be interviewed about, among other things, their “compliance with the laws and regulations prohibiting transfers of funds to members of the Taliban and the Haqqani Network”.

Instead, the Biden administration has been chartering Osama bin Laden’s old airline which had been used to ferry drugs and terrorists to evacuate the Americans that Biden had left behind. These hostages have become another cash cow that the Taliban are using to extract money from American taxpayers through the offices of their allies in the Biden administration.

Biden administration figures have repeatedly met with Taliban leaders. According to Al Jazeera, run by the state sponsors of the Islamic terror group, the administration had even provided assurances that the United States will not fund any resistance to the Taliban.

Coming a few months after Al Qaeda leader Ayman al-Zawahiri was killed while under Taliban protection, a “high-level delegation” that allegedly included a top CIA figure, agreed not to “fund any armed groups or non-state actors in the country”, particularly the National Resistance Front, consisting of the Northern Alliance members who had originally helped us liberate Afghanistan.

This betrayal came even after clear evidence that the Taliban were harboring Al Qaeda.

Why would the Biden administration unilaterally throw away our best leverage against the Taliban without getting them to end their support for Al Qaeda and other terror groups?

The Biden administration then went beyond just appropriating $1.1 billion in humanitarian aid, much of which will benefit the Taliban in one way or another, while authorizing transactions with the terrorists, but actually conspired to print money for the Taliban to replace their old bills.

According to Biden’s State Department spokesman, the administration was “working hard with international banks to facilitate payment transfers from Afghanistan’s central bank to European printing companies where new banknotes would actually be produced” to “replace what had been crumbling banknotes in Afghanistan”.

Spokesman Ned Price explained that, “Afghanistan’s markets, even today, run widely on cash, but existing banknotes are crumbling. And that’s why this is such an urgent challenge.”

The Biden administration’s idea of an “urgent challenge” in Afghanistan isn’t preventing Al Qaeda from reforming, it’s not getting out Americans, or stopping the Taliban from stoning people, it’s arranging for a Polish printing company to churn out banknotes for the Taliban.

It’s not enough for the Biden administration to steal billions from 9/11 families and send it to the Taliban, it has to go all the way and actually print money for the Islamic terrorist group.

Thanks to Biden, the Taliban will get 10 billion in ‘Afghanis’ from Poland and another 10 billion from a French company. $3.5 billion in assets in the United States are being transferred to a Swiss trust fund held for the Taliban so that a future administration won’t be able to recover it.

The Biden administration claims to be concerned about Taliban atrocities and then continues to enable the terrorists.

Karen Decker, the head of the US Mission to Afghanistan, conducted a “listening tour” of Afghan women who fled the Taliban and claimed that she shares their “concerns and their hope.” Then she described printing money for the Taliban as “part of our commitment to help the Afghan people”. The only Afghan people that she’s helping are the Taliban.

Thomas West, Biden’s Special Representative to Afghanistan, boasted, “I am very pleased to say that in the past 24 hours we have finally seen the conclusion of two currency transactions.”

There is no other conclusion to be drawn from these latest revelations except that the Biden administration wants the Taliban to remain in power. And has been consistently scheming to bypass legal restrictions on funding terrorism to funnel money to the Taliban.

A responsible administration that served our national interests would be providing a fraction of the aid to the National Resistance Front and other anti-Taliban groups that it’s funneling to Ukraine, and it would, at the very least, use sanctions to undermine the Taliban regime.

Instead, Biden is laboring to protect the Taliban and to keep the terrorists in power.

That’s the same conclusion that the Taliban have drawn. That’s why after prolonged hesitation and doubletalk, they are shedding any pretense about their intentions.

The Taliban’s Supreme Leader Haibatullah Akhundzada ordered judges to impose “the ruling of sharia” on, among others, “seditionists” and “apostates”.

The Taliban have begun a comprehensive crackdown using the traditional brutal punishments of Islam. They’re testing the Biden administration and know that they have nothing to worry about.

Supreme Leader Akhundzada had been a chief judge in the Taliban’s court system during their original period of rule when they became notorious for inflicting grotesque and horrifying punishments on anyone who displeased them.

Nothing has really changed.

Last year, the Taliban captured Danish Siddiqui, the chief photographer for Reuters, in a mosque, beat and tortured him, ran him over with a car, and shot him at close range.

The same media, including Reuters, which has amplified Qatari propaganda about its Al Jazeera terrorist operatives, like Jamal Khashoggi in Turkey and Shireen Abu Akleh in Israel, has remained mostly silent about this atrocity against an actual journalist by the allies of Qatar.

The Biden administration, which has attacked Saudi Arabia over Khashoggi’s death and announced an FBI investigation of Israel over Abu Akleh’s death, has made no such efforts over the mutilation and murder of Siddiqui. Biden condemned the Saudis and the Israelis over Khashoggi and Abu Akleh, but never once mentioned Siddiqui’s name.

Jalina Porter, until recently a Washington Wizards cheerleader, who was elevated to a State Department spokeswoman, failed to condemn the Taliban after Siddiqui’s brutal murder, but only called for “an end to the violence” and a “just and durable peace settlement.”

The complicity and the double standards spoke eloquently about the administration’s agenda.

Last year, the Taliban’s Supreme Leader made his position clear to the rest of the world, “I cannot compromise on Shariah to work with you or even move a step forward.”  He warned that “even if the world uses an atomic bomb, we will rule the country according to the Sharia Law.”

That was back in July.

The Biden administration and its media allies knew that they were lying about the kinder, gentler Taliban and their openness to human rights. They told those lies to keep the money flowing.

After robbing 9/11 families, diverting money to the Taliban under a dozen pretexts, including payments for hostages that the Biden administration chose to leave behind, and even collaborating in printing money for the terrorist group, there will be a brief condemnation as the Taliban resume openly mutilating, killing and torturing victims through their Islamic courts.

But the Biden administration will make sure to keep taxpayer money flowing to the terrorists.

The shameful treason we saw at the panicked evacuation of Afghanistan was not the climax, it was the middle of a conspiracy to put the Taliban in power by the enemies of America. Those enemies are not just in Moscow, Tehran or Beijing, they are right here in Washington DC.

Daniel Greenfield, a Shillman Journalism Fellow at the David Horowitz Freedom Center, is an investigative journalist and writer focusing on the radical Left and Islamic terrorism. This article is republished from the FrontpageMag.