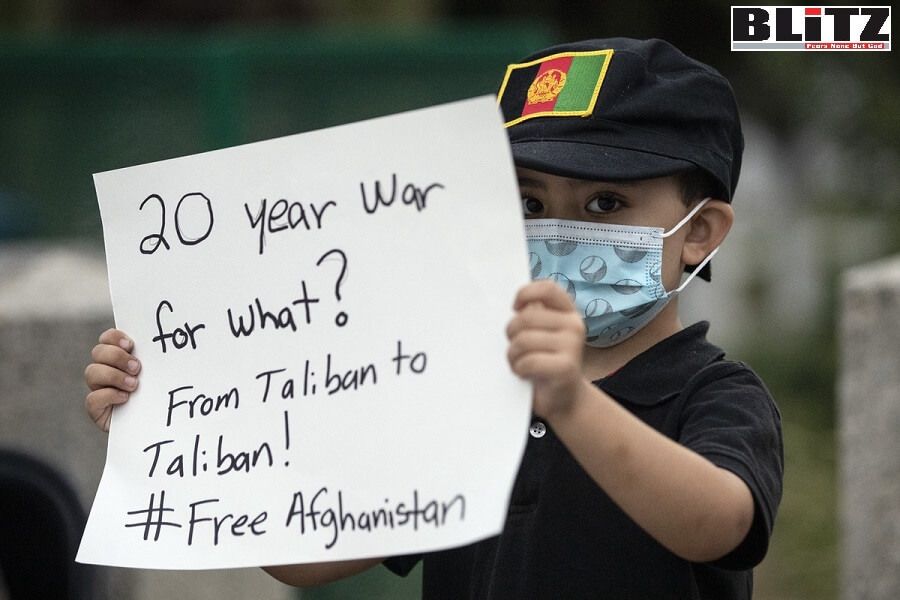 The sudden and sweeping Taliban victory in Afghanistan, and the disastrous performance of the Bidenites, in not foreseeing its rapidity, and not preparing an orderly withdrawal both of its own troops, and also of American civilians and Afghans who had worked with the Americans as interpreters, drivers, and other staff, has shaken the faith of many throughout the world. Writes Hugh Fitzgerald

The sudden and sweeping victory of the Taliban, and the disastrous performance of the Bidenites, in not foreseeing its rapidity, and not preparing an orderly withdrawal both of its own troops, and also of American civilians and Afghans who had worked with the Americans as interpreters, drivers, and other staff, has shaken the faith of many throughout the world.

Those countries that thought they could always count on the Americans not to abandon them have had to think again, and none more so than Israel and its partners in the Abraham Accords. A report on other American miscalculations in the region is here: “Upside of Afghan mess for Israel: Closer ties with Arab states – analysis,” by Herb Keinon, Jerusalem Post, August 18, 2021:

In September 2020, following the White House signings of agreements between Israel and the United Arab Emirates and Bahrain, former US secretary of state John Kerry appeared unexpectedly on the Israeli radar screen – though not in a favorable light.

A video clip went viral of his predictions for the Middle East uttered in December 2016 at the Saban Conference in Washington, just before he left office. He said that no Arab state would ever make peace with Israel until an agreement was reached with the Palestinians.

“I’ve heard several prominent politicians in Israel sometimes saying, well, the Arab world is in a different place now, we just have to reach out to them and we can work some things with the Arab world and we’ll deal with the Palestinians. No, no, no and no,” Kerry said with his signature supreme confidence.

“There will be no advance and separate peace with the Arab world without the Palestinian process and Palestinian peace,” he continued. “Everybody needs to understand that. That is a hard reality.”

“Four years later Israel signed agreements with four Arab states; the UAE, Bahrain, Sudan and Morocco – one state, someone quipped at the time, for each of Kerry’s nos.

The long-jawed sage of Louisburg Square and the Elizabeth Islands had egg on his face, placed there by himself, and his four “No’s” of 2016 will echo down through the years, to permanently mock his wrongheaded certainties. He claimed that there would be no peace between Israel and the Arab world “without the Palestinian process and Palestinian peace”; the four Arab states that ignored the querulous Palestinians and, furthering their national interests, made their own peace with Israel, clearly had a different idea.

Kerry has yet to publicly acknowledge his gross error; his motto has always been “never apologize and never explain.”

On Wednesday, August 18, former prime minister Benjamin Netanyahu revealed in a Facebook post that another time, three years earlier, when Kerry – now the US’s special envoy for climate – was wildly off the mark.

In 2013, while Kerry was neck-deep in efforts to broker a peace deal between Israel and the Palestinians, Netanyahu wrote that Kerry invited him to take a secret trip to Afghanistan “to see, in his words, how the US established a local military force that can stand alone against terrorism.”

“The message was clear,” Netanyahu continued. “The ‘Afghanistan model’ is the model that the US wanted to apply to the Palestinian issue as well.”

In other words, Kerry wanted Israel to buy into the idea that a US-trained and equipped Palestinian force under the control of the Palestinian Authority would be enough to keep terrorists from taking over the West Bank after an Israeli withdrawal.

Kerry labored under the delusion – shared of course by almost the entire American establishment – that the American military would be able to stand up an Afghan force capable of defeating the Taliban. And Kerry wanted Netanyahu to view that “success story” up close, in Afghanistan itself, an unsubtle suggestion that the same outcome could be possible with the “moderate” PA, that he thought would prevent the West Bank from being taken over by terrorists. But Netanyahu refused to believe that that “success” in Afghanistan would last beyond the American presence. Unlike Kerry, Netanyahu knew that the Afghan army, despite its enormous advantage in weaponry, was a weak reed, its soldiers fighting not out of deep conviction but for pay, and facing fanatical Muslims who were willing to die in the Jihad they had been conducting for several decades.

“I politely refused the offer and rejected the very idea,” Netanyahu wrote. “I thought then that the minute the US would leave Afghanistan, everything would collapse… We would get a similar result if, God forbid, we would give parts of the homeland to the Palestinians.”

Netanyahu said that the lesson is clear: Israel cannot rely on anyone else when it comes to its security. Though he said that this was a doctrine that guided him, this doctrine was by no means his alone….

The debacle in Afghanistan has made clear that the Jewish state cannot expect the U.S., at least under the Bidenites, to stand by it no matter what. Biden has assured the world that on his watch Iran “will never acquire nuclear weapons,” but who now can believe any of his assurances? Israelis know they will have to rely on themselves alone, and must not entrust their security to the U.S. And ensuring that security is not merely a matter of weaponry, but also of geography. Israel simply must hold on to territory in the West Bank essential to preventing an invasion force from the east that, were Israel squeezed back within the 1949 armistice lines, which is what those who call Israel’s settlements in the West Bank “illegal” desire, could split the country in two within an hour.

In light of the US withdrawal from Afghanistan and the Taliban’s lightning takeover of the country, the idea about not being able to rely on anyone but oneself – not even the US – is obviously being internalized these days not only in Jerusalem but in other capitals around the region and the world.

If former president Barack Obama brought Israel closer to the Persian Gulf countries because of his pivot away from traditional US regional allies like Egypt and Saudi Arabia and because he was determined to sign a nuclear deal with Iran, the recent events in Afghanistan will strengthen those ties even more….

The Middle East policy of Barack Obama, the most anti-Israel of American presidents, brought Israel and several Arab states closer together – an unintended consequence of his making a catastrophic nuclear deal with their shared enemy, Iran, and his lessening of support for the pro-American regimes in Egypt and Saudi Arabia which Obama, the moral purist, deplored as despotisms.

Israel is the strongest military power in the Middle East. With the U.S. in retreat from the Muslim world – can a complete withdrawal of American forces from Iraq be far behind? – not only the Arab states in the Abraham Accords, but other Arab states, too, and most importantly Saudi Arabia, will want to strengthen security ties with Israel. Israel is able to share valuable intelligence on Iran with them, to suggest ways to better defend themselves, to supply them, too, with advanced weaponry, such as the Jewish state’s new laser defense system. And through its own displays of derring-do, with Mossad agents continually delaying the Islamic Republic’s nuclear project (think only of the Stuxnet computer worm in 2010, the assassinations of nuclear scientists between 2010 and 2012, the seizure of Iran’s entire nuclear archive in 2018, the destruction of two different centrifuge plants at Natanz in 2020 and 2021), Israel has won the admiration and gratitude of the Gulf Arabs, threatened by Iran, who know that the strongest force preventing Iran from becoming a nuclear power is not the United States, but tiny, determined, relentless Israel.

The Taliban’s sweep into Kabul, and the takeover of every part of Afghanistan (save for the Tadjik-populated Panshir province, that is the lone holdout), has caused joy among the Jihadis everywhere; Hamas and Hezbollah have been quick to congratulate the victors; at the same time, anxiety about Jihadi threats to their own regimes has gone sky-high in Egypt, in Jordan, in the U.A.E., in Saudi Arabia. And naturally they are eager to tighten their ties to Israel.

Abbas Kamel, the director of the Egyptian General Intelligence Directorate, was in Israel on Wednesday discussing the situation in Gaza. During a meeting with Prime Minister Naftali Bennett, he extended an invitation on behalf of Egyptian President Abdel-Fattah el-Sisi for Bennett to visit in the coming weeks – the first such invitation to an Israeli prime minister from an Egyptian president in more than a decade.

The timing of the invitation just as the Taliban is taking over Afghanistan is surely not coincidental. When the two leaders do sit down it’s a sure bet that – in addition to discussing Gaza – they will focus on what they need to learn and the joint policies they need to implement following the dismal developments in Afghanistan. And that is a type of discussion Bennett is certain to have with a number of other Arab leaders, both discreetly and out in the open, over the next few weeks.

The invitation for Prime Minister Bennett to visit Cairo has long been bruited about, but now the Taliban takeover has given new urgency to the invitation; the Egyptians want El-Sisi and Bennett to meet as soon as possible – “within weeks” — to discuss what can be done in light of the Taliban victory and the American retreat. It’s the same discussion he will have, openly, with the Crown Prince of Abu Dhabi and the King of Bahrain, and less openly, with the Saudi Crown Prince, Muhammad bin Salman. It would not be a surprise to find that this Taliban victory and the ill-planned and hasty American withdrawal causes the Saudis to finally take the plunge and join the Abraham Accords, in order to formalize closer military ties with Israel. They have everything to gain, and nothing to lose. That may be the best result — the unintended consequence — of the American degringolade that the world has just witnessed in what has again become Taliban-tormented Afghanistan.