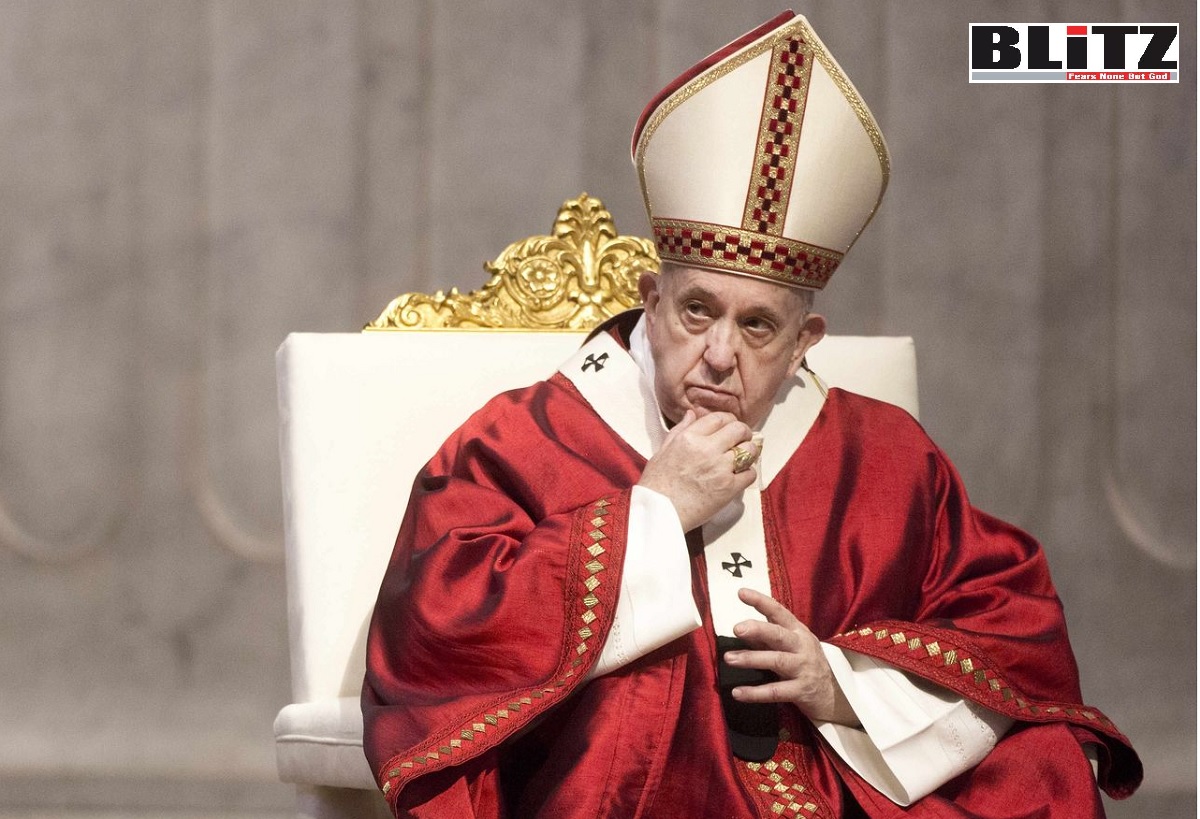 This Pope, by supporting totally the vaccine ideology, denied the foundations of Christian thought based on the concept of free will. Vatican pushing for people to be vaccinated, made a step forward telling that get a jab is an ethical commitment for believers. The “madness of the Cross” has always symbolized free will “ideology” for over two thousand years.  Francesco simply erased it with his extreme secularism. Let me explain better this key concept for Catholic church. God has made Christians free – according to their theology – to be able to choose between good and evil on daily basis. So free that, in tradition, Christians have had rejected the word of God and put Christ on the Cross.  Otherwise God would have made believers good as default attitude.  But He wanted believers to have a will of choice. In shortcuts from this concept consequently derive many key points upon which the narrative of Western democracy has been built.

Bergoglio, but even Mario Draghi and president Sergio Mattarella have, in a few months during pandemic, overturned this concept, maybe because they consider themselves above God. They know what is “good” and they want to force people to pursue it. A cornerstone of Western civilization has been shattered in few months.

But why Pope changed drastically the framework of Catholic religion? Why he seems to flank and support Big Reset actors? Just After Ukrainian-Russian war Bergoglio seemed to change his mind and took a different stance, not totally lied on globalist interests. Especially when he said that Putin is not the only culprit for the invasion of Ukraine, because “NATO barked at Russia’s door”.

We have to understand his Jesuit origin, which makes him used to having relations with power and leadership. Jesuits, after ten years from their establishment in 1550, inspired conspiracy theories, mostly coming from their enemies, particularly from the Protestant reformers. Basically, it was both the religious and the secular powers which can exert that ignite fears in their opponents.

In response to the pope’s exhortation, business and public sector leaders formed a partnership with the Vatican. The so-called Council for Inclusive capitalism – a friendly name behind a project that is destroying democracy and freedom so far. The official purpose, it is to address the economic and environmental needs of the planet and its inhabitant. That Is the claim, the side under the sun. The shadow side seems to be less shining.

Let see the list of economic titans that met the Pope November 2020.

Lynn Forester de Rothschild was at the top of the list. A successful corporate lawyer turned even more successful entrepreneur, American-born de Rothschild (the honorific derives from her husband, the British financier Sir Evelyn Robert de Rothschild). Then a long list of CEO from Merck to Johnson & Johnson, to Visa, BP, Mastercard just to quote some of them.

It is strange that the will of this super club of riches to listen “the cry of the poor” while they are destroying SME, small businesses, labor rights, salaries and the future of hundred million of people. They really don’t care about anybody. They are doing so using all the capitalism power, from media to financial investors, fooling people with TV and blackmailing them with the leash of debt. Doing that using the most aggressive corporate “reset” techniques “shock and howe” style. And now they are exerting power over governments to bend people will to live in freedom, by using the treat of virus. They love so much poor that want fill up the world with other poor people. This highest echelon of global capitalism must have hypnotized Bergoglio.

A rapacious capitalism isn’t itself a proper news, but the fact that a pope believes in them it is shocking.

We have seen frequently during “pandemic” crisis priests that forbid to non-vaccinate people to attend a mess in a church and the constant call of pope about the moral commitment over the community about vaccine, despite the fact scientific community, not on Big Pharma payroll, are not so sure about the effectiveness, safety and utility of mass vaccination.

We have asked an expert journalist on the Vatican, F. C. to explain to us better the behind the scene of Bergoglio’s election to put inside a framework the pieces of our analysis.

“Bergoglio’s election was piloted by the so-called Mafia of San Gallo, several exponents of the Church and some influential cardinals, one of the leaders was cardinal Carlo Maria Martini – who already tried the Bergoglio election in 2005 – and for the current apostolic Constitution, the Universi Dominici Gregis of Pope John Paul II, to such an act, the excommunication Latae Sententiae (immediate and de facto) follows”

In short, an expert, that we can call “Vaticanist” as in Italian fashion, said that the election of Francesco Bergoglio was actually illegal and that Bergoglio is an antipope, as happened more than forty times along the centuries-old history of the Church. But why inside the Vatican has no one raised their voices to denounce what seems to all intents and purposes a coup d’état within the Holy See?

FC stated that there are many members of the clergy flanking Benedetto XI – considered the legitimately elected pope – but they have been silenced so far. “And most of them today bow their heads because Bergoglio has a terrible attitude: wicked and vengeful. If he were so sure he could get someone like him elected he would resign, which he will not, you’ll see. But the Church is cyclical.  Anyone who thinks that because Bergoglio has filled the sacred college of nullity, in the image of him, can lead to his pope reply is wrong”.

Turf “wars”, intrigues and underground conspiracies seem to feed Bergoglio’s ruling. The great question is whether Bergoglio is part of the Great Reset project or not. Whether he is a voluntary actor as his behavior witnessed during the so called “pandemic” or he was deceived, as  his reaction to Ukrainian war suggests. His policy is a blatant answer.

The outcome is the abjuration of the Christian concept of Free Will and a huge fracture inside Catholic Church between modernists/secularists and traditionalists. And from this point of view we can state that Bergoglio is not a Christian pope and that he could bring the Catholic Church outside the religious relevance.