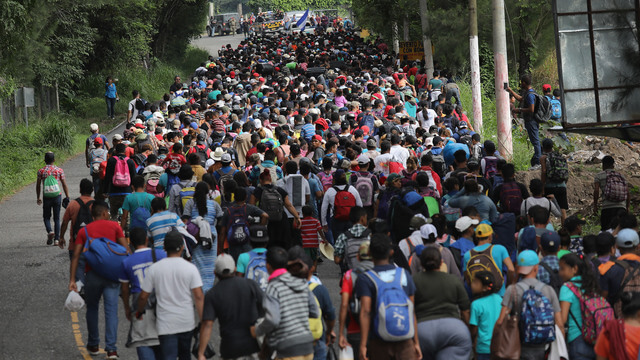 Three weeks have passed since the press conference at the White House, where CNN correspondent Jim Acosta repeatedly argued with President Trump that the immigrant convoy heading to the US border through Mexico “is hundreds of miles away” and “not an invasion.” In response to an election campaign that showed immigrants trying to climb the border fence, the reporter wrote: “They are not going to do it.”

At the end of last week thousands of immigrants arrived from the same famous convoy to the Mexican border town of Tijuana. Hundreds of them stormed the border, climbed the fence and threw stones. The Border Protection Agency used tear gas to repel the crowd. So maybe there were not enough people to define it as an “invasion,” but it was certainly not a group of law-abiding asylum seekers.

It’s true that President Trump was very strong on the immigration drum during the campaign for the midterm elections, but last week he proved that those who criticized him scorned him badly.

For the past few weeks, the only story in the mainstream media was that the threat from the immigrant convoy was a lie born in the president’s feverish mind. The convoy would soon be dispersed, so we were told, and if not, it would take months to reach the border. These claims were distributed as facts on most television channels and newspapers. It turns out that none of them had ever imagined that a convoy could also travel in buses or trucks.

After the election ended, and when Trump stopped talking about the convoy and coverage of the subject on the Fox network was diminishing, commentators on the left wrath. For them, the diminishing attention to the issue only proved that the focus on it was purely for political purposes. There was a temporary lull in the news, but after the incident at the border on the weekend and the news headlines it brought, the commentators again complained again, this time that ‘Fox’ covered the issue too much.

More importantly, however, the latest incident shows again the extreme direction to which the American Left has been swept. If in the past months we have heard and seen demonstrations for the elimination of border enforcement and the closing of the immigration agency, now agents and guards on the border must not defend themselves against aggressive mobs.

The Hawaiian senator Brian Schatz wondered on Twitter whether the use of tear gas is not a violation of the Chemical Weapons Convention (the answer, of course, is “no” echoing, and he erased the squeak ). Representative Barbara Lee described the tear gas fire “on women and children” as an atrocity and called for UN inspectors to be stationed at the border. Progressive darling Alexandria Oksio Cortez likened the immigrants from Mexico to Jews who had fled from Nazi Germany .

All this lamented choir broke out with all its might, despite the fact that the tear gas was aimed only at the older men who led the attack – the very same method used by the Obama administration and of course also by other disruptions throughout the United States.

But beyond the constant weeping of the left, the really important issue on the border is the set of rules for immigrants from Central America. As we have written extensively in the past, the US immigration system now allows children and minors to enter the country while their asylum requests (most of which are rejected) are still pending in court. From the moment they enter, they can easily disappear, and it is the systemic lunacy that draws more families to come.

The Trump administration has adopted a tougher approach recently, starting with talks with Mexico regarding the immigration of immigrants to its territory until the request for asylum is clarified. In addition, there are discussions about the prohibition of applying for immigrants who have entered the United States illegally. Such a deal would shut some of the bigger holes in immigration policy, but the California court (while in a case of resistance to the tram) has already issued an injunction to parts of it Donald Trump is wrong when he tries to portray all immigrants as a threat. Most simply ask for a better life. However, the United States has the sovereign right to decide who can and can not enter the country, and demand that it be done in a legal and orderly process.

If a significant part of the Mexican immigrant convoy succeeds in entering the United States, the other potential immigrants will get the message that the movement of many people is better than trying to cross the border in small groups. Such a case would only cause more and more pressure on the border, no matter how many people who insisted that the convoy never arrive would try to cancel it.