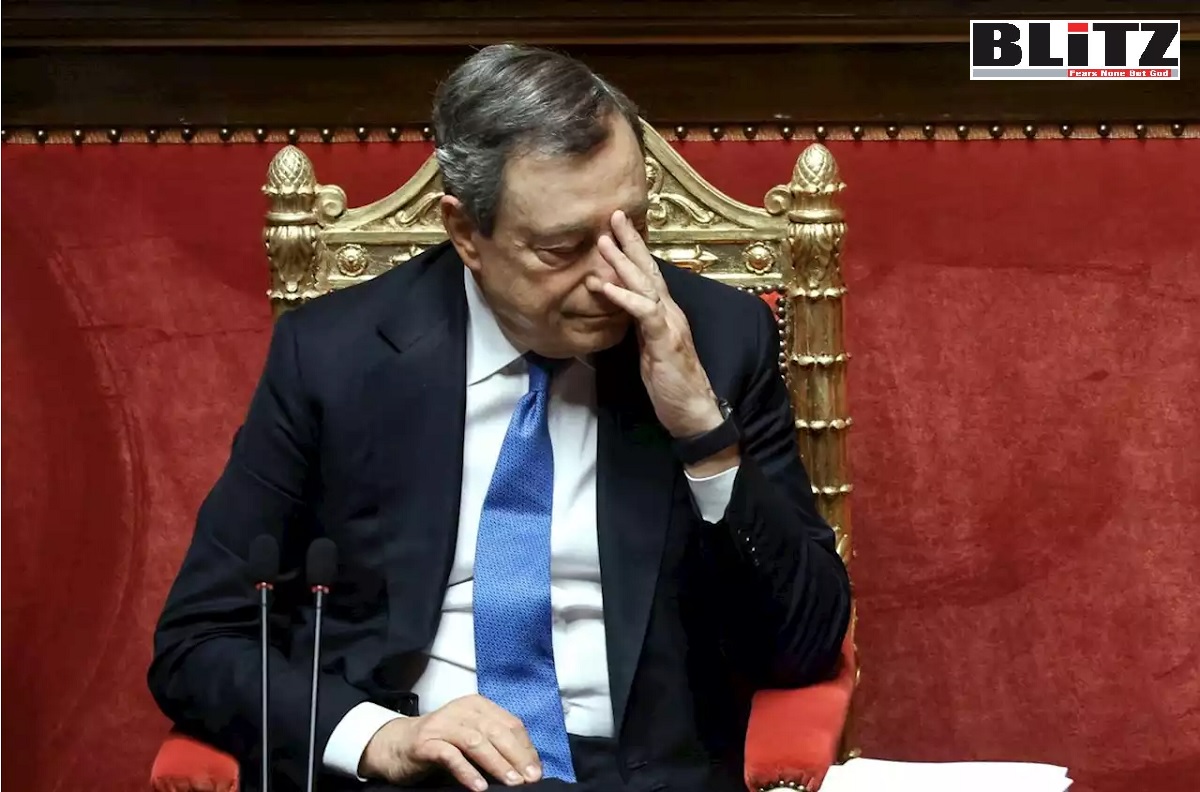 The strange political crisis in Italy needs an inside investigation to uncover its real nature. To understand the fall of the main European pillar of financial oligarchies, Italian Prime Minister Mario Draghi, we have to take two assumptions. A Premier that over just a few months has canceled 800 years of right history – the Magna Carta achievements, Habeas Corpus, labor rights, ruled over Italy like a Sultan of the XVII century, even with more power – does not leave his office for a local political turmoil. So, there are two possible reasons behind his fall.

The First is that in Draghi’s mindset prevailed the arrogance of power, the contempt for democracy and parliamentary procedures, typical of a corporate manager and an inherent annoyance towards any criticism, combined with a sacred right to be able to lie to Italian citizens with impunity. His speech to the Senate on Wednesday last week was a slap in the face to any opponent inside and outside his government. ‘Obey or goodbye’, seemed the root of the Premier’s attitude. That isn’t the way to rule a democracy, even a formal democracy with sovereignty limits like in Italy. In short, Draghi was a victim of his stupidity.

The second reason for his give-up could lay in a turf war inside the US balance of power. A conflict that sees the demoglob gang losing ground since last year and approaching a political debacle in the November midterm election. A disastrous pandemic ruling, a terrible economic management, the support to the insane World Economic Forum (WEF) agenda or Great Reset, an open endeavor to cancel US democracy cornerstones, the war in Ukraine and many others sins, have all pushed the US economic “cupola” (a Mafia’s word to indicate the board of directors) to withdraw their favor to them. According to this second assumption, the Italian Premier has set an exit strategy to avoid the coming social and economic disaster. It was like a smoke screen. Draghi knows he lost the backing of his US powerful lobby and without it, it is risky to go forward. That could explain his provocative speech that pushed the center-right coalition plus a splitted 5S Movement party to sink the Premier.

Any further attempt by Italian President Sergio Mattarella to save this government has been useless.  The last but one was when Mattarella pushed Draghi to a Parliament passage after refusing his resignation on July 16th.

Draghi submitted “his resignation and that of the government he heads,” the office of the President Sergio Mattarella said laconically in a brief take. The President “took note of this” and the government remained in place to “conduct current business,” the statement added. For millions of Italians that love democracy, free will, sacred life, civil rights, labor conquests and the Constitution, it was like a new April 25th 1945, a Liberation Day. For the financial oligarchy’s servants, establishment and deep state members, conformists, opportunists, unaware and indolent, it was a day of mourning.

What really hurt many Italians already stranded on and impoverished by Draghi’s economic policy, was the forged reality of the crisis. On Wednesday, Mr. Draghi said the spontaneous shows of popular support for his government were “unprecedented and impossible to ignore,” as he weighed appeals to rescind his resignation. But It was just a ridiculous makeup fixed by the mainstream media with a few hundred people. Many of them were just establishment members and clochards. It was a joke offending millions of people close to poverty because the rise of food and energy prices. A policy driven to burn demand and destroy the middle class that is in WEF’s agenda.

Now Italy is likely going fast forward to the election in October. The rage of millions of people humiliated, impoverished, deprived of basic rights and mocked about the pandemic by this and the previous government will play a key role at the polls.  And it will be difficult for anyone who has supported the Draghi government to escape the judgment of the citizens.