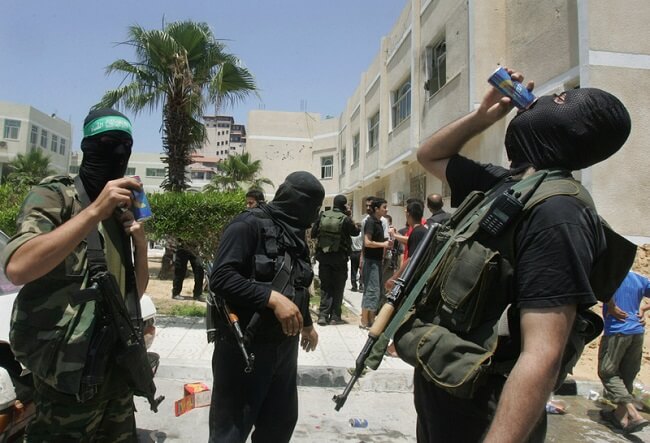 Arabs living in Gaza are currently controlled, manipulated and educated by the Islamist, antisemitic, totalitarian organization known as Hamas. In Judea and Samaria, or the West Bank, the Palestinian Authority, equally totalitarian, antisemitic and political as opposed to  religious maintain  similar control. Both organizations not only have their roots in terrorism but continue to maintain Charters dictated by terrorism.

Disciplined analysis of both Charters and the added Hamas Document of General Principles and Policies of May 2017 conclude that they are versions of the German National Socialist manifestos of the 1930’s.  All three documents are openly racist; historically fictitious; paradoxically anti Islamic to the point of mocking both Allah and the Koran; factually inaccurate pertaining to International Law and openly supporting and promoting terrorism. How therefore do Palestinians command so much respect and support on the World stage and how have they managed to morph themselves into being the victims of racism?

The Hamas Charter is an racist document aimed at the illiterate and poorly disguised as an Islamic, militant code of conduct. It copies Nazi racism even to the extent of quoting the mythical Protocols Of The Elders Of Zion – Articles 7,13,14,15,31 and 32 are particularly rabid examples. It is misogynistic – Articles 12 and 18 just two of the more extreme examples; and it is totalitarian in its non acceptance of any religion other than their form and subservience to Hamas’s incoherent and twisted form of Islam as per Articles 7,11,13,31 and others. The Charter is pornography for sadomasochistic, Islamic terrorists, nothing more, and nothing less. The updated Document of General Principles and Policies changes nothing in the Charter and given the total lack of religious, historical and legal knowledge is an absurdity.

All three are attached for review – only a disciplined researcher such as myself or those seeking a cure for insomnia would bother to read any of them. Given the obsessive antisemitism, support for terrorism and non acceptance of Christianity and other religions and command for forced  conversion , subservience  to Islam or death  one must question the motives and indeed the requirement for the United Nations being so supportive and accommodating of  Palestinian aspirations.

Why has there been no challenge from the political elite or questions asked of Palestinian leaders by the media about their Charters which are simply Nazi documents?

Articles 1 to 8 of the Palestinian Charter mock history.  The term revisionist history is to permit a degree of credibility when no such credibility should be permitted. The Articles suggest without qualification that the Palestinians have enjoyed a connection to the geographical area since time immemorial. Let us destroy these myths forever and do so by asking the following very simple question and demanding answers.

If Palestinian history exists where can a student of the subject find reference to , one, just one indigenous Palestinian – a King, Queen, Prince, Princess , Imam , writer ,  poet, artist, astronomer , explorer,  warlord, physician or leader, man or woman? . Additionally where can one find record  of one , just one battle, war or skirmish in any conflict Palestinians were engaged in from 3000 BC to 1948 AD. What year, who they fought with or against, given the 5000 years of conflict; and naturally the name of the indigenous Palestinian leader at the time.

There was never a Palestinian nation, race, religion, tribe or sect so I shall wait with baited breath the answers to the questions posed above.

Articles 7 through to 19 of the PA Charter delete any chance of peaceful resolution as terrorism is the Palestinians only resolution to their false religious, legal and historical claims to their nonexistent homeland. Article 15 calls for the elimination of Jewish nationhood. There is no need to elaborate on the remaining Articles as similar garbage is vomited. One is left wondering why the so called indigenous Palestinians never previously fought for their homeland until 1968…..most recently when Jordan was in control from 1948 -1967. The answer of course being that there were no such people then as the Palestinians.

Both Hamas and the PA  as we all know  , are devoid of history and their fraudulent claims to any part of the geographical land mass are further exposed by the stupidity of calling themselves Palestinian. Arabs have no sound for the letter ”P” in the Arabic language. ”P” for ”Palestinian” is nonexistent – a name they cannot pronounce. When did these accent phenomena first find its way into the Palestinian narrative? My guess is that it appeared when they with finance from the Soviet Union were created in 1964 .

Both Charters consistently refer to Palestinians – let’s repeat my concern. No letter for the sound P is relevant in the Arabic language . Why not call themselves by the Arabic pronunciation which would be ”Felastininan ‘‘? Why not indeed? Maybe because, Felastinian derives from the Hebrew Pleshtim meaning invaders and the Hebrew name given to the Philistines who came from the Greek Islands and became extinct in circa 600 BC. If the Palestinians want a homeland, maybe they can make a case for Crete or Corfu – they would be just as irrelevant as Palestine.

In reality, there is not and never has existed a nation, race, people, genre, tribe, sect, religion, culture , language etc. etc. known to mankind as Palestinian. Today’s Palestinians are Arab immigrants who came to the area on the back of the economic opportunities that Zionism offered. They have morphed into politically militant organizations known as Hamas and the  Palestinian Authority  and a couple of other equally Nazi type parties.  Both these organizations are rabidly racist which they do not conceal and both exist ultimately to eliminate the State of Israel, Judaism and thereafter Christianity.

It is staggering therefore that any democratic Government would acknowledge these Arabic political parties as a negotiating partner. Promoting those manifestos should disbar them the respect and global attention they both currently enjoy .

Both these fascist organizations support and promote either the liquidation of Israel and /or the extermination of Jews – Hamas  comically demands the extermination of Freemasons,  Rotarians and Lions , irrespective of race or religion  as well as the forced conversion and subservience to Islam of Christians to spare them death. How has humanity stooped to such base levels to even consider relationship normality let alone global support with these indecent excuses for humans?  Global bigotry paralleled by human ignorance has plunged to subterranean levels.

Jew jealousy, Jew bullying, Jew hating, Jew bashing, Jew killing, Jew Pogroms and finally Jew genocide is the usual historical trajectory. When the Jew fights back the physical   anti Jew actions become harder to achieve and are amended and expanded to a political as opposed to physical conflict. And this is what we Jews are currently experiencing. As racism is currently the most despicable of all ‘isms, unfashionable within the political and media elite, a new terminology has to be created which is still racism but under a different banner and definition. This new term is Zionism. To ensure that a form of credibility is attached to this charade, others of the Jewish faith are continuously paraded by the ‘liberal elite’ expressing their support for opponents of Israel. The logic being that as some Jews are anti Zionist therefore it cannot be that non Jewish anti Zionists are necessarily anti Jewish. This response seems entirely logical until one studies the manifestos of the opposition they are supporting which as validated previously and as per the attachments are rabidly antisemitic. Jews indeed can hate Jews and the Jewish State of Israel. When these Jews are at the receiving end, Israel will always be their insurance policy irrespective of their previous hatred for the Jewish State. Utter hypocrites and cowards.

Why has the racism, Nazi terminology and myths contained within all the Palestinians Charters and policy documents gone unchallenged by world opinion and the mainstream media?  As relevant is the Islamophobic ideology within the Hamas Charter, and this needs elaboration. The Koran never mentions Jerusalem nor Palestine but in numerous Suras is totally definitive that Allah has bestowed the Holy Land, to the Children of Israel , that is the Jewish people. Both Hamas and the PA Charters are therefore in blatant defiance of the Koran and indeed are mocking the prophet and Allah. Many Islamic scholars believe that the Palestinian greed for land bequeathed to the Jews is the reason for such utter turmoil, chaos and suffering within Islam. The nauseating hypocrisy of the Palestinian Islamists and their supporters should be comprehensively challenged but there is only silence, and silence is assent.

It will not surprise those of us learned with the Koran that the racists of Hamas have made no reference in their Charters to the Children of Israel but only use the term Jews. This verifies even further the Islamophobic nature of Hamas and their abuse of the Koran. Confused? The term Jews in the Koran is used to define militants of the Jewish  faith whereas the term Children of Israel for whom the land was given is a collective for all those of the Jewish faith not involved with militancy, that is the vast majority. Hamas are using the word Jews as the collective which exposes, proves and exacerbates their antisemitism. Hamas and the PA are therefore directly opposed to true Islam and to a peaceful, political solution as their Charters signify calling for the destruction of Israel . Both educate their children with the funds provided by taxpayers in the USA, UK and Eu to despise Jews and Christians. At Donald Trump has stopped funding the Palestinians – bravo.

Irrespective of our political differences, how have we as human beings and only seventy years after the holocaust, permitted such grotesque manifestos to remain unchallenged? Nation States and their politicians, charities and their leaders, media and their reporters and numerous other quasi religious and political organizations are vociferously wallowing in a sea of antisemitic excrement and accepting this as normal . In truth this is beyond the grotesque.

Peter Baum is a contributor of Blitz.