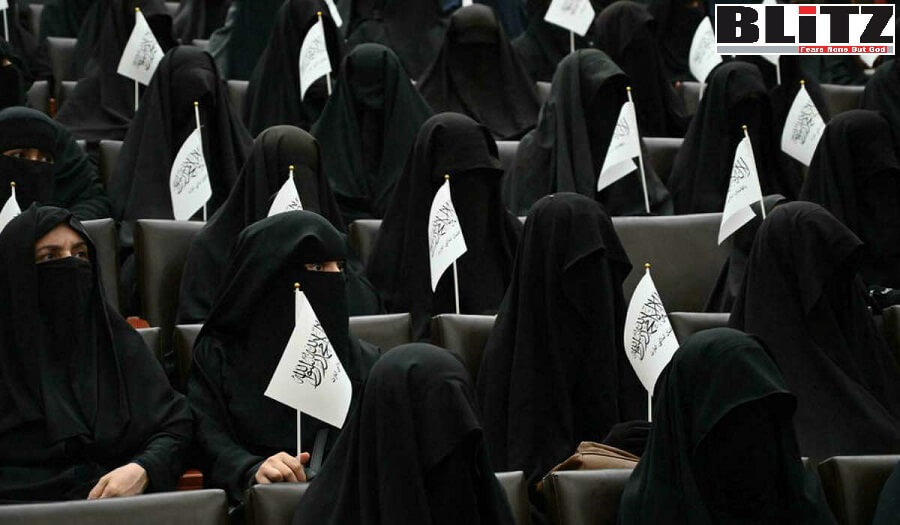 Since the Islamic revolution in Iran, girls and women are facing numerous forms of persecution, while thousands of them have already been hanged or murdered by the mullah regime under outrageously ridiculous allegations. In Iran, girls and women also are raped by the prison guards before being hanged, as mullahs believe, hanging a virgin girl or woman is extreme sin. So, they clear themselves of such “sins” by getting the victims of death penalty temporarily married and raped by the prison guards. But, Iranian regime has its own cadres of propagandists – boys, men, girls and women, who come of the streets chanting pro-regime and anti-West and anti-Israel slogans with the nefarious agenda of showing the world – Iranian regime enjoys support of the masses.

Meanwhile in Afghanistan, during the last weeks, hundreds of Afghan women belonging to Kabul’s Shaheed Rabbani Education University marched the streets of Kabul holdings placards and signs. This march was undertaken in support of the Taliban, its strict interpretation of Islam, its strict gender segregation rules, and its structure of governance that guarantees women second-class status.

Conveniently, while the new Taliban regime has banned public demonstration there was no opposition to the pro-regime women’s rally. If footage of the march is anything to go by, the gun-trotting members of the Ministry for the Propagation of Virtue and Prevention of Vice went to extra lengths while providing cordons and a smooth passage to these burqa clad women as they marched towards their destination—the Shaheed Rabbani Education University. Later, these burqa-clad pro-regime demonstrators [read pro-jihadists] filled the university’s auditorium and spoke at length extolling the virtues of the conservative laws and why it is good for Afghan women. And, they did not forget chanting anti-West slogans.

This march and the debate that took place afterward by the marching women were poignant for two reasons. First, the demonstration, held on the twentieth anniversary of the September 11 attacks, was a stark reminder of how, despite two decades and more than US$780 million spent promoting women’s rights, all Afghan women don’t seem convinced of the liberal idea of gender equality. Second, it questioned the very efficacy of the West’s engagement in Afghanistan, which perpetually maintained “women’s rights as a reason for continuing the war in Afghanistan” long after the Taliban was toppled in 2001.

While we are feeling disturbed at the demonstration of burqa-clad women in Kabul or the pro-regime activities of similar pattern of girls and women in Iran, we definitely forget a much alarming issue. In most of the western countries, including the US, the number of radicalized Muslims are on rise. Every year, the number of Muslim girls and women putting on hijab and burqa has been growing in numbers. Radical Islam is gradually expanding in the West, while situation in Britain, for example, is extremely volatile.

In South Asia, for girls and women, getting radicalized or putting on Islamist hijab and burqa are becoming a popular trend. In India, a country with over ninety percent of its population being Hindus, radical Islam is on growth alongside the rise in jihadism and religious hatred. Hundreds and thousands of Hindu girls and women in India are falling victims of love jihad or sex jihad every year. Forceful religious conversion of Hindus into Islam has been significantly rising. Still, no one seems to be giving real importance to such dangerous activities.