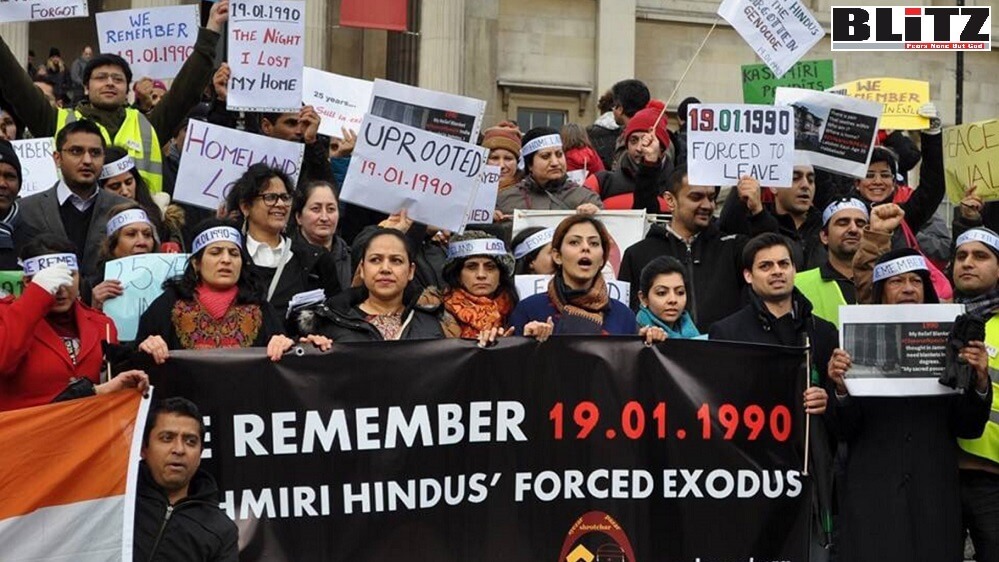 On January 19, 1990, the radical Islamic jihadists had once again unleashed the barbarity and mayhem on peace-loving aboriginals of Kashmir, which resulted in forced displacement of Hindus pandits of Kashmir. January 19 is observed by Kashmiri Pandits across the world as “Holocaust Day”, while after more than three decades, there is no answer to the question – if the Kashmiri Pandits will ever be able to return to Kashmir. Threats and barbaric exodus on Kashmiri Pandit families comprising over 250,000 women, men and children forces them to flee their homes.

At events in cities in India and abroad to mark their exodus, Pandits pledged to return home. Cries of Hum wapas ayenge (we will return) rent the air and #HumWapasAayenge has been trending on social media in recent years.

According to independent journalist and research-scholar Sudha Ramachandran, Kashmiri Pandits or Kashmiri Brahmins are Hindus. A highly literate community, they were disproportionately represented in the Kashmir bureaucracy as well as in the teaching, legal, and medical professions, prompting resentment among other communities in the Valley, especially Muslims, who comprise over 95 percent of the population.

However, respect for the Pandits (many of whom were teachers) and a shared Kashmiri identity that held Pandits and Muslims together prevented differences from erupting into conflict. That changed in 1989-90.

Kashmir was in ferment. Militancy was gathering momentum and anti-India sentiments were running strong. In late 1989, Bharatiya Janata Party (BJP) leader Jia Lal Taploo and a retired judge, Neelkanth Ganjoo, were assassinated. It sent shock waves through the Pandit community. Although the pro-independence Jammu and Kashmir Liberation Front (JKLF) said the two men were killed because of their ties with the Indian state rather than their Pandit identity, the Pandits were not convinced.

Describing the January 19 exodus, Sudha Ramachandran wrote: Developments in the first three weeks of 1990 further fueled their fears. “It was evident that Kashmiri Muslims wanted us to leave the Valley,” Ashok Dhar, who left Baramulla for Jammu on February 2, 1990, told The Diplomat. Pandits were given a choice: convert to Islam, leave the Valley, or perish. The Hizbul Mujahideen put up posters ordering all Hindus to leave the Valley and lists with names of Pandits to be eliminated were circulated, Dhar recalled. In mosques and mass rallies, people shouted inflammatory and anti-Pandit slogans. “They wanted sharia rule in Kashmir,” Dhar said, adding that the Pandits “had no choice but to leave” their homes.

Matters came to a head on the night of January 19, 1990. With tensions peaking, hundreds of Pandit families began their journey out of the Valley. Their numbers would swell in the following months.

What happened in January 1990 is bitterly contested. Kashmiri Pandits maintain that they were driven out of the Valley by the Muslims. “Even our Muslim friends were caught up in the Islamist frenzy of that period,” Dhar recalled.

But Muslims in Kashmir are trying to turn the blame on the then Jammu-Kashmir governor Jagmohan and argue that by arranging for buses to transport Pandits out of their homes from Kashmir, Jagmohan had facilitated their flight, paving the path for the Indian security forces to launch an all-out military offensive against Muslims.

According to media reports, just around 600 Pandit families stayed in Kashmir, while they were left unharmed for most part, Pakistan-based terrorist outfit Lashkar-e-Taiba had massacred Pandits at Sandrampora (1997), Wandhama (1998) and Nandimarg (2003). It was a planned cleansing of Hindu Pandits in Kashmir, at the instruction of Pakistani spy agency ISI.

Commenting about the fate of the Kashmiri Pandit families, Ms. Ramachandran said: as for those Pandits who left the Valley, many were put up in tented accommodation in camps in Jammu and New Delhi initially and subsequently in townships in these cities. Several moved to other cities in India and abroad, where they have done well professionally. Wherever they live, their memories of events in 1989-90 remain vivid as are their rather idyllic recollections of their lives before their flight from the Valley.

Successive governments in New Delhi and Srinagar though have attempted to draw displaced Pandits back to the Valley. They have also announced resettlement packages promising financial support and jobs for those who would return, these offers did not help in gaining confidence of the Kashmiri Pandit families in returning to their homes, just because, Kashmir is still witnessing activities of radical Islamic militancy groups as well as Pakistan-sponsored terrorist outfits.