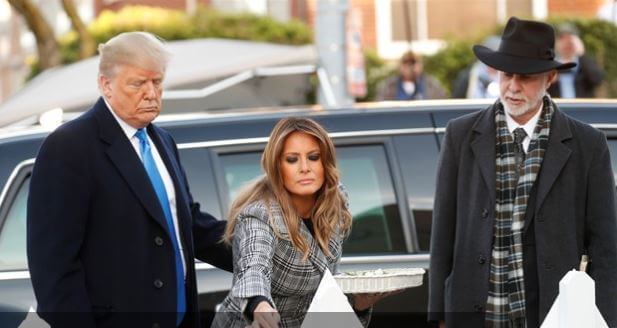 Last week, I was totally ashamed by how so much of the media targeted Jewish leadership, Jewish bystanders and Jewish history when reporting the events, the deaths, funerals and memorial services surrounding  the murders of eleven Jews massacred while in shul on Shabbos.

The event brought a feeling of fear and insecurity like never before.  It elevated the ability for an anti-Semite to commit murder in a situation I know all too well, attending Shabbos services.  It was totally different than the recent  anti-Semitic crimes that took  place in New York in the religious communities of Crown Heights and Flatbush.

Everyday, news around the world, especially that shared by religious Zionists on Facebook, contains reports of more prejudice, hate, destruction and death that many of us would never hear about otherwise. They thank President Trump everyday for standing with “our people.”

According to many liberal Jews, the Pittsburgh Hate Crime was provoked by President Donald J. Trump. Besides that accusation being totally untrue, it makes all Jews look bad.

I discussed this with Rabbi Aryeh Spero, known worldwide as America’s Rabbi. Spero is a Middle East observer and political analyst. Spero is also the president of Caucus for America and author of Push Back: Reclaiming Our American Judeo-Christian Ethos.

He stated, “We are still reeling from this unspeakable attack against our community. A thought occurred to me the other day. Although the attack took place in a Synagogue, it was not motivated, as has been the case historically, by a war against our faith, religion or rituals, nor because of our race. This was a political attack, done by a beastly individual who, as he said, felt threatened by a conspicuous political agenda he sees coming from major Jewish organizations, to wit, its efforts for Open Borders and non-vetted, illegal immigration, which the killer sees as a threat to his race. He went searching for a place where Jews congregate, a synagogue.”

“This was the most horrific attack against our community in American history, and this time it came from the right; but it follows years of attacks and threats against individuals in our community that have been perpetrated by overly zealous members of the Islamic community, some from the Black community, and endless violence against Jewish students on campus coming from the anti-Israel Left. To fight the current anti-Semitism, our Jewish organizations and professionals need to equally and vociferously condemn and battle against the Jew hatred coming from a very powerful and influential political Left. Thus far they have not.

“President Trump has fiercely condemned anti-Semitism in the strongest terms, whether coming from the extreme right or the political Left. He has been a good, genuine, and reliable friend of the Jewish community and Israel for decades, way before he ever entered politics. His father, Fred, was also a reliable friend.”

Spero is also a columnist for CNS News and The American Thinker. He was the first Rabbi to endorse Ronald Reagan, at a time that Jews also voted overwhelmingly for the Democrats.  Reagan turned out to be a great friend and ally with the people and government of Israel.

He added, “It is obvious to many Jews, though, that the President in fact feels a specific personal pain regarding the slaughter in Pittsburgh, perhaps because his daughter and three grandchildren are Jewish. President Trump’s own Jewish grandsons underwent a bris ritual similar to that which took place yesterday in the Pittsburgh synagogue.”

“The media have widely reported that the perpetrator of this massacre is an anti-Trumper and that abundant anti-Semitic assaults across the country have, in fact, been coming from the left.  It is deeply disappointing that some have decided to ignore those realities and exploit this tragic incident with only the midterm elections in mind.”

I furthered the discussion by pointing out that we are reliving our history of self destruction all over again. Through the eyes of non-Jews, we look like ungrateful people. To our foes, the goal to destroy us becomes within reach.  No other minority has such stereotypes. Study Europe before the Holocaust or in ancient times. Jews were financially and socially accepted, but then at their peak, fights arose among them,  before they were part of a greater plan to be eliminated.

I was never a President Obama fan. His refusal to veto anti-Israel U.N. Votes, support the Iran Nuclear Deal and intervene in the elections of Israel made him one of most anti-Semitic commanders-in-chief in American history. Did those who saw it my way engage in endless protests, death threats and fake news? Did I show him disrespect as the elected leader?

By the way, where are all the headlines, opening stories and interviews featuring Trump and his entourage visiting the grieving, the shul and victims in hospitals?  Why is anyone surprised that a Rabbi showed the President respect or that Trump expressed sincere compassion to all?

President Trump is only the third President, the others being George Washington and Ronald Reagan, all Republican, to visit synagogues while in office. We should be celebrating this, like a church would.

Please don’t send anymore emails, letters or plan community events to take credit for leading a voice to say sorry, or ask for money.  That would seem self-serving.  If you really want to do something for the victims of Pittsburgh, America and Israel……Vote for Republican and/Conservative Pro-Trump candidates, secure his leadership and that will SAY THANK YOU.

Voting is tomorrow, November 6th.  If you need information for voting locations, your candidates and where to find out results, please feel free to contact me.

Cindy Grosz is an award-winning pro-Israel and Education activist.  She works on exposing corruption in schools, improving oversight on classroom curriculum and ending anti-Semitism in education situations.  She also helps educators fight discrimination in the hiring and firing practices of school staff. She can be reached at [email protected]