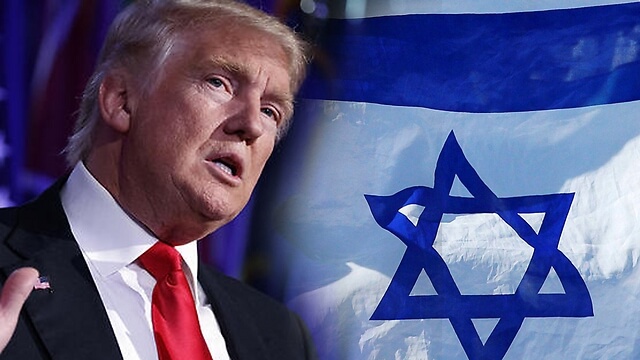 If I had to pick the man of the year in Israeli politics, I would choose one person—Donald Trump. Trump has overseen a revolution in three central areas in our lives: political culture, priorities of the political parties and policies toward the Palestinians. The decision to shut down the Palestinian diplomatic mission in Washington is only one link in the chain.

Let’s begin with the Palestinians. You may hate Trump or view him with contempt, but it cannot be said that there is no method in his actions. Trump believes that in order to solicit concessions from his opponent he must first threaten them and debase them. If they are humiliated, they will fold. If they don’t fold, they will be punished. If they grease up to Trump, he’ll furnish them with flattery.

Such behavior is quite common in the domestic affairs of other countries, including in democratic countries, but it is considered to be dangerous when it comes to foreign policy.

I don’t care about your warnings, Trump tells senior diplomats in the American political sphere and in the international arena. Your caution has led America to failure after failure. The time has come to break with convention.

It is fair to say that his attacks on foreign countries and foreign leaders, his trade wars and verbal wars, have not yet resulted in actual wars. The American economy is booming. At the same time, it may be said that his actions thus far have yet to bring about any deal, any agreement, except for a single and unexciting agreement with Mexico. The question of to where exactly Trump is leading the world with his trade wars against China, Canada, western Europe and against the big US corporations is still open to debate.

So too is the question of what he will achieve with North Korea’s Kim Jong Un, with the relationship beginning with bitter curses and so far ending with mutual flattery. The nuclear project in North Korea has still not been dismantled. The question of the nature of his relationship with Putin is also still wide open.

The same combative attitude characterizes relations between the Trump administration and the Palestinians. Trump began it in good spirit if his words are anything to go by. He appointed his son-in-law Jared Kushner as a special Mideast envoy and hosted Mahmoud Abbas in the White House. He looked for a quick deal, the deal of the century, which would prove his ingenuity as a deal maker along with the total impotence of Obama and Hillary Clinton who tried and failed.

When it became clear to him that the Palestinians were in no hurry to anywhere, especially not to submit to American-Israeli dictations, he took steps. The transfer of the US Embassy from Tel Aviv to Jerusalem is purely symbolic, but the drastic slashing of US aid to UNRWA and the demand for the cancellation of refugee status for millions of Palestinians who are currently considered to be refugees, was significant. The closure of the PLO offices in Washington is another blow.

The government of Israel saw in these steps a gift worth celebrating. The day or reckoning has come for the bad guys. The good guys have won. Long live Trump. A less exciting analysis would point to a few problems in the side of the celebrations. Firstly, the Israeli government view an adversarial relationship between the US administration and the Palestinians as a goal while Trump himself sees it that way. He is likely to flip, like he did on North Korea. Secondly, Trump is far away and we are close. The children who cannot go to UNRWA schools will be the ones who throw Molotov Cocktails at IDF soldiers on the Gaza border.

Most importantly, no one knows where frustration will lead the Palestinians, whether they will submit or launch a new intifada. No less important, is whether Trump, with all his disputes and fighting with allies and opponents alike does not make the US an irrelevant political force on the world stage. For Israel this poses a problem. We saw what happened in Syria when Trump abandoned the area to Russia and to the Iranians. We saw what happened after Trump left the Iran nuclear deal. The Europeans are now moving to compensate the Iranians. They are likely to act in the same way toward the Palestinians too.

Trump’s influence on political parties in Israel is fascinating. Yair Lapid’s central argument against Netanyahu was that the world in not prepared to accept him. I will be a softer version of Netanyahu, Lapid promised. I will be the Netanyahu that the world will be happy to embrace. Then comes the Trump era and this premise is stripped of all validity.

The world, which in Israeli eyes begins and ends with the American administration, is embracing Netanyahu with open arms and his governmental policies. Lapid has lost the very reason for his political existence. On the other hand, the feeling on the Right is that the sky’s the limit. Not only Netanyahu and the Likud, but also for Bennett and Shaked. All you have to do is tell Trump how good he is.

Trump’s most prominent area of influence by is on the political culture in Israel and on the strength of its democracy. Everyone is a Trumpist. This has been said quite a lot in the last year. There seems little point in elaborating.

Like Loading...
Recommended for you:
Continue Reading
Advertisement
You may also like...
Related Topics:Donald Trump and his son-in-law Jared Kushner, The government of Israel saw these steps, The same combative attitude characterizes relations