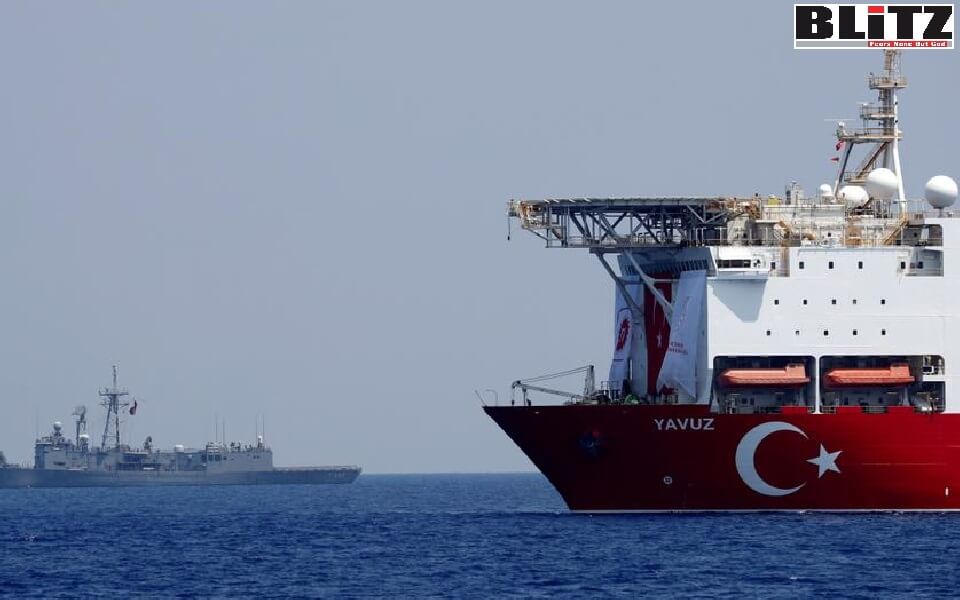 In July 2021, Israel expressed full support to the Republic of Cyprus in the wake of the unilateral reopening of the Varosha coastline by Turkey. Last year, it also showed solidarity with Athens during Greek-Turkish tensions in the Eastern Mediterranean. While the tripartite partnership is progressing, Ankara is seeking to expand its footprint in the region and is pursuing a two-state solution in Cyprus. It is also applying a new foreign policy methodology to Greece while remaining adamant in its demands. Writes Dr. George N. Tzogopoulos

Turkey’s new policy vis-à-vis Cyprus, based on a two-state solution, is being heavily criticized by the international community. In a press statement, US Secretary of State Anthony Blinken expressed American support for a Cypriot-led comprehensive settlement to reunify the island as a bizonal, bicommunal federation.

Also, the decision by Ankara to reopen the coastline of Varosha, a city on the eastern edge of the island that was abandoned after the 1974 military invasion, united the 15 members of the UN Security Council in condemnation. On July 23, the Security Council reaffirmed the status of Varosha as set out in previous resolutions, including 550 (1984) and 789 (1992).

Israel is committed to strengthening its collaboration with both Greece and Cyprus. The July phone call between presidents Isaac Herzog and Recep Tayyip Erdoğan did not prevent Jerusalem from expressing deep concern about Turkish announcements regarding Cyprus. FM Yair Lapid hosted his counterparts Nikos Dendias on July 21 and Nikos Christodoulides on July 27. Although the Israeli Foreign Ministry generally refrains from taking sides, it is now clearly in Nicosia’s corner, just as last summer it sided with Athens during the Greek-Turkish stand-off in the Eastern Mediterranean.

The US is currently recalibrating its relations with Turkey. The two sides are looking for ways to cooperate despite serious problems. Because the process with Ankara is ongoing, Washington has not yet taken concrete steps to cement the Israeli-Greek-Cypriot partnership. The tripartite partnership is solid in and of itself but would obviously benefit from an American umbrella, as it did during the Trump administration.

In the interim, Turkish actions in the Eastern Mediterranean—beyond the Cyprus question—deserve attention. While Israel, Greece, and Cyprus have reportedly hired the French vessel Nautical Geo to carry out maritime research for the construction of the East Med pipeline, Ankara has leaked that its Oruc Reis seismographic survey produced no results. If that is true, no drilling is likely to take place in maritime zones that are claimed by both Athens and Ankara in the Eastern Mediterranean. Turkey is threatening, however, that it will continue seismographic research and drilling in Cypriot waters.

Ιn parallel with the leak, Turkish sources say Ankara might be prepared to submit its differences with Athens to the International Court of Justice (ICJ). Ankara has indicated that a special agreement to be negotiated between the two sides and submitted to the ICJ could cover maritime zones only. Greece, under former deputy PM Evangelos Venizelos, informed the ICJ continually since 2015 of other disputes (regarding sovereignty, military activities, etc.).

At first glance, the Turkish stance looks bizarre. Ankara has been adding to its catalogue of claims for years, challenging the sovereignty of Greek islets as well as questioning the right of Greece to militarize some of its Aegean islands—and it now appears prepared to allow the ICJ jurisdiction over maritime zones.

A closer look shows that Turkish foreign policy is unchanged and is simply employing new technical methodologies. Ankara carefully studied the 2020 maritime agreements signed by Greece with Italy and Egypt, and hopes Athens might be prepared to make similar “compromises” in Greek-Turkish legal delimitations. Maritime zones around the island of Kastelorizo are its main target, as well as certain sovereign rights in the Aegean.

While Turkey seems to have provisionally altered its rhetoric about the ICJ (at least in theory), it is still adamantly pushing for the demilitarization of some Aegean islands by Greece. On July 13, its permanent representative to the UN sent a letter to Secretary-General Antonio Guterres complaining about Greece’s stance. Athens dismissed the allegations, sending its own letter a few days later. Also, starting on July 20, Turkey attempted for several days to rescue migrants south of Crete in zones of Greek responsibility. Its Defense Ministry said Turkey was conducting a search and rescue operation.

This summer in the Eastern Mediterranean may be calmer than last year, but serious political disagreements, paired with old and new Turkish strategies and methodologies, are making it a tinderbox ready to ignite once again.