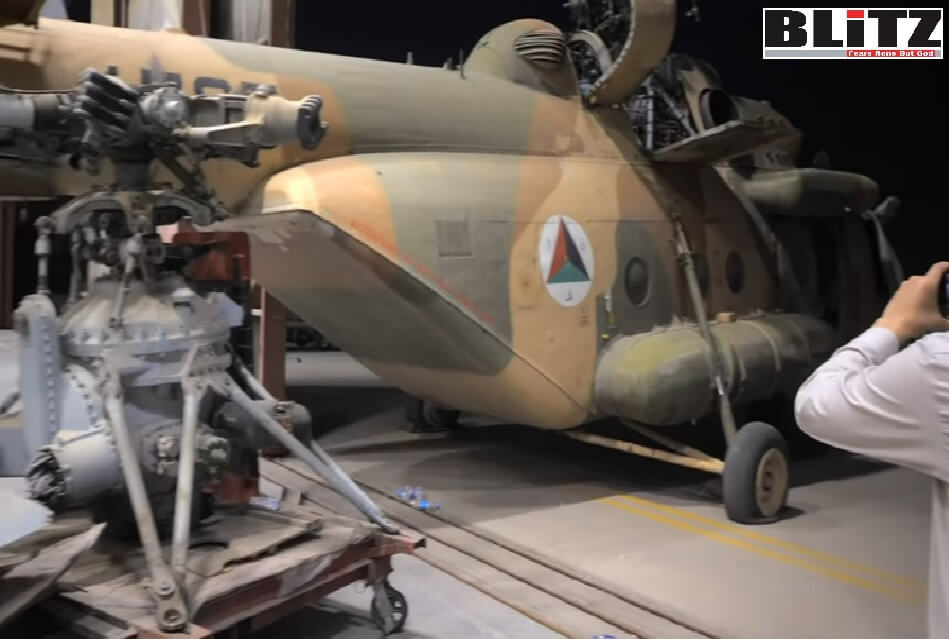 President of Ukraine Zelensky is not only has associated himself with neo-Nazis and notorious Azov Battalion, he has also been collaborating with Taliban jihadists in Afghanistan as well as other jihadist and terrorist groups in that country.

According to CNN report, US authorities have finally admitted of leaving military assets worth US$ 7 billion with Taliban jihadists. Commenting on this issue, columnist Daniel Greenfield said: “Some arguments are not really worth having. The debate over how much American military equipment had been left behind in Afghanistan is one of those. The real answer is that we don’t know and by ‘we’, I don’t just mean us, but the White House and the Pentagon don’t really know. The sheer amount of corruption in the entire system means that anything we gave the Afghans risked being sold. Equipment and material were reported as destroyed that were actually sold. And so, it’s all but impossible to know anything for sure except that we left too much behind”.

Meanwhile, Ellie Kaufman in her report in CNN said:

Approximately $7 billion of military equipment the US transferred to the Afghan government over the course of 16 years was left behind in Afghanistan after the US completed its withdrawal from the country in August, according to a congressionally mandated report from the US Department of Defense viewed by CNN.

This equipment is now in a country that is controlled by the very enemy the US was trying to drive out over the past two decades: the Taliban. The Defense Department has no plans to return to Afghanistan to “retrieve or destroy” the equipment, reads the report, which has been provided to Congress.

The US gave a total of $18.6 billion of equipment to the Afghan National Defense and Security Forces (ANDSF) from 2005 to August 2021, according to the report. Of that total, equipment worth $7.12 billion remained in Afghanistan after the US withdrawal was completed on August 30, 2021. It included aircraft, air-to-ground munitions, military vehicles, weapons, communications equipment and other materials, according to the DoD report.

The huge value of the hardware left behind will serve to refocus attention on the chaotic and hasty Afghanistan withdrawal that has been heavily criticized by lawmakers from both parties.

“Much of the remaining equipment” left in Afghanistan requires “specialized maintenance that DoD contractors previously provided” to Afghan forces “in the form of technical knowledge and support,” the report states.

The Department of Defense was required to submit a report to Congress “regarding the disposition of United States property, equipment and supplies provided to” Afghan forces that “were destroyed, taken out of” or “remain in Afghanistan,” states the report, which is dated March 2022.

“The $7.12 billion figure cited in the Department’s recent report to Congress corresponds to ANDSF equipment and not U.S. military equipment used by our forces,” Army Major Rob Lodewick, a Defense Department spokesperson, said in a statement. “Nearly all equipment used by U.S. military forces in Afghanistan was either retrograded or destroyed prior to our withdrawal and is not part of the ‘$7.12 billion’ figure cited in the report.”

Shocking information about Ukraine and Zelensky

Ever-since United States and its allies had humiliating retreat from Afghanistan, Ukrainian President Zalensky was enthusiastically cooperating with Taliban jihadists in “maintenance” of helicopters, fighter jets, aircrafts and other military equipment. He has also taken several Mi-17 helicopters from Afghanistan to Ukraine for “maintenance”. Meanwhile CNN said, the US Department of Defense notified US Congress of its intent to transfer the helicopters in January 2022, before Ukraine war started, and Kiev signed a letter of acceptance on March 11, 2022.

“These five helicopters were in Ukraine undergoing overhaul maintenance when the Afghan government collapsed, and have remained there since”, the report states.

Despite the fact of US withdrawal from Afghanistan, Taliban jihadists did not hesitate in shifting some “non-standard munitions” including 37,000 122mm howitzer rounds, 15 million rounds of Ball riffle ammunition, over 99,000 40mm high-explosive/fragmentation grenade cartridge, and about 119,000 82mm high-explosive mortar rounds to Ukraine.

Meanwhile a section of Afghan Taliban jihadists also are showing signs of solidarity towards Ukrainian people, including those neo-Nazi forces and Azov Battalion as Afghans consider Russia as its “greatest enemy” and are reportedly smuggling-out weapons, ammunitions and military assets.