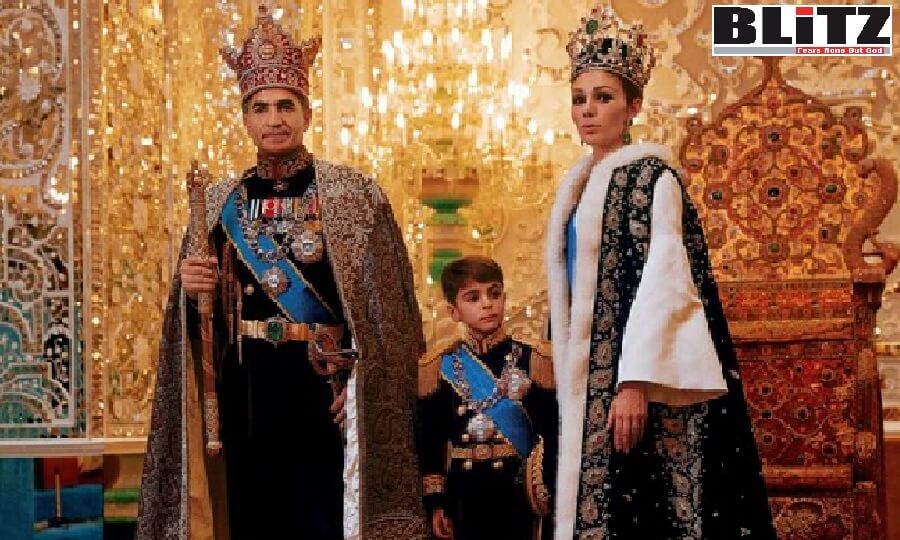 It doesn’t matter that the Shah was dropped by the United States, which worked to replace him with the Ayatollah Rohullah Khomeini – by no means the least of the follies of American policy, which was also allied with bin Laden for a time, anticommunism makes for strange bedfellows Sartre was happy to support a man who proposed to do away with the bourgeoisie. There is no point in looking a gift horse in the mouth! Writes Michel Onfray

This man is a compass that points south! Sartre, deluded as he was, missed out on the perilous rise (as a professor in Le Havre, he found virtues in Hitler, according to Philippe Dechartre who was his pupil at the time – I have this information from his son Emmanuel…) of the Popular Front (he did not vote and despised the masses marching in the streets…), on the catastrophic defeat in 1940 (Beauvoir found the Germans who took her under their wing very sympathetic…), of the Occupation (in 1944, he found the German officers in the subway very polite and wrote about it….), the Resistance (he later claimed to be in the Resistance, but probably in the same group as Marguerite Duras, who was sleeping with a lout from the Gestapo…), the Liberation (he repeatedly concealed people as compromised as himself, including his publisher, whom he whitewashed and who whitewashed him in return…), he calls de Gaulle all manner of names (“fascist” being the most courteous, but there are also “reactionary pimp”, “pig”, “bloody bastard”, or “shit”, see his Interviews with John Gerassi between 1970 and 1974), he gave the Soviet kiss to all the Marxist-Leninist dictators the World has ever known (Stalin, Mao, Che Guevara, Castro, Kim Il-sung), he supported the Palestinian terrorists who killed Israeli athletes at the Munich Olympics, he defended the Baader-Meinhof gang, he asked people to vote François Mitterrand… One wonders why, in Le Siècle de Sartre, in the year 2000, Bernard-Henri Lévy undertakes to praise such a man!

Of course, Sartre is also on the side of the Ayatollah Khomeini! Never late for an infamy, Jean-Paul Sartre supported this man exiled in Neauphle-le-Château in the Yvelines where France had granted him hospi­tality. From October 1978 to February 1979, the Iranian dignitary spent 114 days there; Sartre joined his support committee! It is not surprising that this episode is mostly concealed. In fact, it is not mentioned either in his authorized biographies, nor in the Dictionnaire Sartre, nor in the Album Pléiade, nor in the chronologies which accompany the three volumes of philosophy in this collection, nor in La Cérémonie des adieux that Simone de Beauvoir brought out in 1981, to give an account of the last years of her companion.

Sartre’s political thinking was as superficial as a teenager’s petulance: a bourgeois had stolen his mother, whose affection he had enjoyed alone since her widowhood, the child was then fifteen months old, and this remarriage, when he was twelve years old, had triggered in him an unquenchable hatred of the bourgeois. At least the idea he had of them. From then on, anything and everything that attacked the bourgeoisie acted as an absolute ideal for him. The left was his family, since his mother’s remarriage had robbed him of it. Les Mots describes this neurosis between the lines. The existential psychoanalysis elaborated by the philosopher justifies this genealogical, biographical, and psychological reading of his political commitments.

Like Stalin or Mao, Guevara or Castro, Mao or Kim Il-Sung, Khomeini is a kindred spirit of Sartre. Nationalism, imperialism, colonialism – these are the enemies since they embody the law of the father for this cultured man who ingenuously admits he has no subconscious… An Ayatollah who opposes the Shah of Iran – who was portrayed as an agent of American imperialism, also having good relations with Israel – is a new kinsman! It doesn’t matter that the Shah was dropped by the United States, which worked to replace him with the Ayatollah – by no means the least of the follies of American policy, which was also allied with bin Laden for a time, anticommunism makes for strange bedfellows Sartre was happy to support a man who proposed to do away with the bourgeoisie. There is no point in looking a gift horse in the mouth!

The same neurosis animated Sartre when he belatedly became an ally of the FLN in Algeria: the progenitor in this case was General de Gaulle, the aforementioned “reactionary pimp”. His zeal remained undiminished as the aim was to establish a socialist regime on the other side of the Mediterranean. It doesn’t matter that this change of regime ushered in the return to the traditional patriarchal values promoted by Islam. If the paternal demiurge were killed, the bloodshed would be without consequence, even acting as a catharic ablution.

This period of Sartre’s support for the Ayatollah Khomeini, between the end of 1978 and the beginning of 1979, is recounted by Beauvoir in La Cérémonie des adieux (published in English as Adieux: A Farewell to Sartre in 1981). The philosopher died a few months later, on 15 April 1980. She recounts the end of the life of this man who had smoked and taken drugs more than he should have for decades. Now half-blind, half-deaf, he was no longer himself, drooling, drinking, suffering from memory loss, having a peeled tongue from swallowing amphetamines, he rambled, taking two days to read Le Nouvel Observateur (in 1973), and furthermore he had diabetes, etc. This is this man whom his courtiers cast into the arms of the Ayatollah Khomeini, in the aftermath of which Pierre Victor (alias Benny Lévy; his last personal secretary) obtained from him, in March 1980, interviews for Le Nouvel Observateur in which he, who had justified Palestinian terrorism, converts… to philosemitism! These interviews were published under the title L’Espoir maintenant.

Let’s leave Jean-Paul Sartre there. He wrote nothing about this companionship with the Ayatollah, which is to say that he was no longer himself, having hitherto made a headline out of everything he did. While he gave the impetus to Islamo-leftism, the rest came to pass without him.

It was Michel Foucault who, along with a few other young philosophers of his generation, were lying in wait for the old lion to die, thereupon taking up the torch in the most brutal fashion. Although he was haloed by the structuralist success of Words and Things (1966), a book that professed to eschew History in favor of a metaphysics of structures, he had now come to tell us, thanks to the Iranian revolution, what the truth in politics would henceforth be: a return to theocracy – provided it is not Catholic, of course… In the same way that structuralism was a return to the medieval ontology of essences, in other words, an idealist counter-revolution, Islamo-leftism, which was founded on this occasion, was to be a return to pre-revolutionary theocracy, which constitutes another counter-revolution: a political one this time.

Michel Foucault’s political path was quite sinuous, though not without logic: he embraced the prevailing current of each era, by which he made an an ad hoc career! He was a communist in the early 1950s, and Althusser got him to teach at the École Normale Supérieure; then a Gaullist in the 1960s, he was a member of the ÉNA jury in 1965, also working for the Fauchet university reform commission two years later, and was then offered management positions in the French education system, but his homo­sexuality was used against him; a leftist after May ’68, a Maoist, to be precise, he became director of the University of Vincennes;  appointed to the Collège de France in November 1969, in the years that followed he backed the idea of a bloody proletarian dictatorship. In 1977, he supported the new philosophers alongside Yves Montand, Bernard Kouchner and André Glucksmann, from then on he was in good standing with the socialists. In 1978, he defended the Shiite theocracy and the political Islam of the Ayatollah Khomeini, and the whole left applauded; the last Foucault, who turned away from the socialists in the 1980s and moved closer to the neo-liberals, Mitterrand having initiated the left’s demise subsequently celebrating the great European market. Since the famous headline “Vive la crise!” in Libération (February 1984), which loudly applauded the shift to the right of the left, in other words the denial of the left, liberalism had been in fashion. Foucault died on 25 June 1984.

The grandfather of Islamo-leftism is Sartre, who was willing to do anything to ensure that the Judeo-Christian West would burn, that Western Europe, the Europe of freedoms, would be cremated in a world where Eastern Europe, the Europe of barbed wire, was confronting it, assuming that Gaullist France which he equated with fascism, would be incinerated and that a socialist, Marxist – and Muslim – Third World would then shine bright! The steeple, no; the minaret, yes. The pope, no; the ayatollah, yes. The Bible, no; the Qur’an, yes. The Sunday sermon, no; the call of the muezzin, yes. Christian anti-Judaism, no; Muslim anti-Semitism, yes. Catholic misogyny, homophobia and phallocracy, no; patriarchy, the hunting of homosexuals, Arab-Muslim sexual mutilation, yes. Crusades, no; Jihad, yes. The Cross, no; the Crescent, yes. This has become the catechism of nihilistic France. Who could have foreseen such a return of the religious?

To what does Michel Foucault’s plea for this political counter-revolution that restores the full powers of theocracy – the very opposite of democracy –as was the case before pre-1789, resemble?

The Shah’s regime was not, of course, a democratic model, but it sought to westernize, modernize, secularize, and industrialize the Iranian people, who lived in a traditional, custom-bound and conservative world. His political police were brutal, his army shot on sight and spilt much blood. The opposition to this regime was carried by the Shiites. If evil is on the Shah’s side, then good must be found on the other side of the barricade! The alumnus of the École normale supérieure, with a degree in philosophy, professor at the Collège de France, the adulated philosopher, arrived on scene under the pretext of pondering reality: he saw only ideas, bipartite dissertations, concepts. He did not believe what he saw; he was rather content to see what he believed.

To prepare for this trip, he had read Henry Corbin. It is not certain that the reflections of this Islamologist on the nature of angels in Islam, on the divine hierarchies, on the archangelic heptad, on apophatic theology, on Avicenna’s angelology or on the phenomenology of the Holy Spirit were the best preparation for seeing reality as it is. Why didn’t he simply read the Qur’an, the hadith and a biography of Mohammed!

It did not occur to the philosopher that perhaps theocracy is not the best way to install democracy in an authoritarian country. Fascinated by negativity alone, without any concern for what might follow, he sided with political Islam.