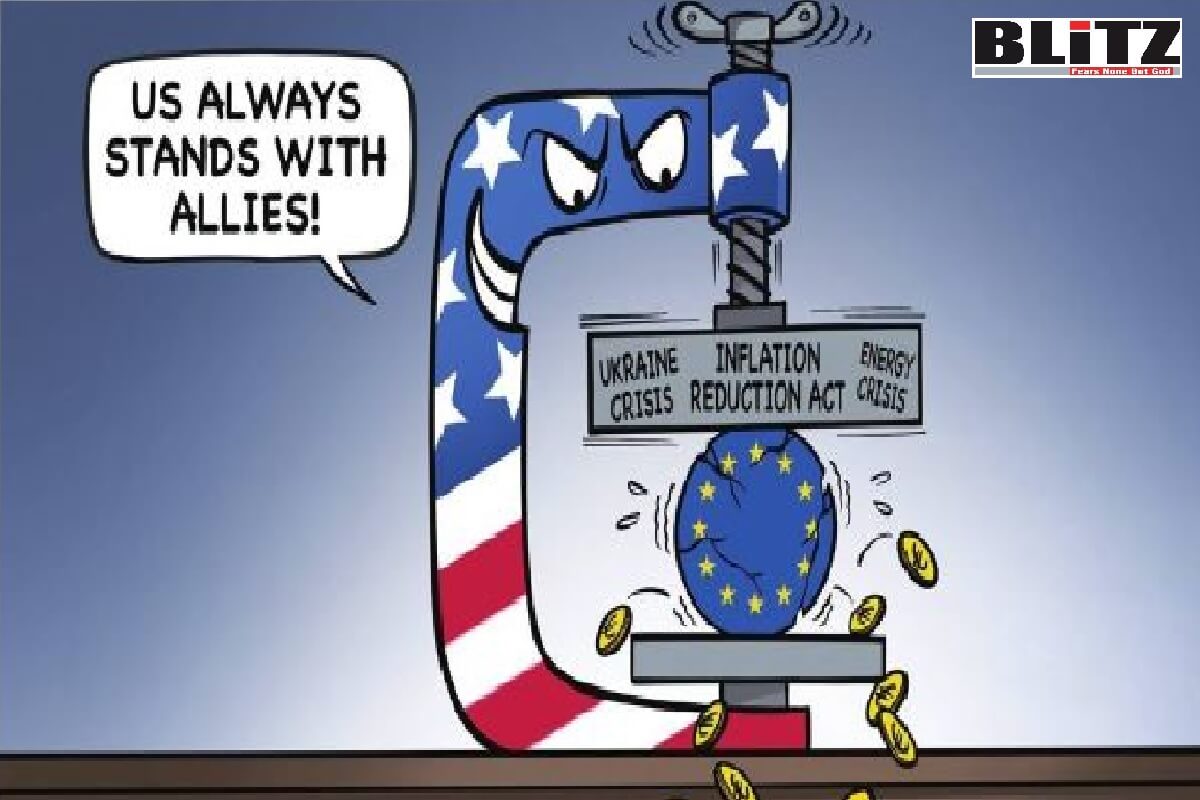 Washington’s economic war is being waged not only against Russia, but in fact also against its own European allies. Writes Uriel Araujo

This week London announced it has ordered thousands of new anti-tank weapons to restock, after sending thousands of its units to Ukraine. Meanwhile, it has been reported that Washington is weighing Kiev’s requests to provide the country with cluster munition warheads. Both the UK and NATO have been almost running out of weapons for Ukraine. Recently, US President Joe Biden has been struggling to maintain his international coalition to support Kiev, but hardly succeeded due to domestic problems (both in the EU and in the United States). The conflict in Ukraine aggravates Europe’s energy crisis and this is one of the very reasons Washington has fueled this conflict.

University of Chicago political science professor John Mearsheimer has written extensively on how NATO’s enlargement policies over the years plus its strategy to move Ukraine out of Russia’s orbit by integrating it into the political West are the very root of the conflict which started in 2014 – and 8 years on, this is still the case.

For almost 8 years, the Donbass conflict was Europe’s forgotten war, even though in April 2021 Kiev escalated the violence there once more, with Washington’s full support. Since 2014, NATO has been aggressively provoking and encircling Russia (even in the Arctic), and its member states have been sending massive arms shipments to Ukraine.

For example, on February 18, before the beginning of the current Russo-Ukrainian military conflict (February 24), Kiev started a nasty bombing campaign on Donbass, targetting civilian infrastructure and even a kindergarden in Lugansk. Ironically, the week before that, Moscow had withdrawn its troops from the area near the border, which should have de-escalated tensions – much to no avail.

Up to February 18, in a series of provocations, Ukraine’s military personnel often broke the cease-fire in Donbass and shelled the region so as to instigate the local militias into responding, thus providing a pretext for further Ukrainian aggression while NATO kept sending weapons and mercenaries to Kiev and further fueling tensions. All of that, one can argue, had been escalating to the point of potentially becoming casus belli for Russia. And here we are today. Whether one is critical of Moscow’s decision to launch its military campaign or not, all the above is part of the larger context that one should always keep in mind.

Why then has the US played such a destabilizing role and has supported all that? I’ve written on how the geopolitics of Washington’s strategies is intertwined with geoeconomics and energy interests. The United State’s persistent campaign against Nord Stream and against any Russian-European gas cooperation is part of that. Geoenergetic interests are one of the main issues and driving forces of the 21st century and Washington has been waging a largely unilateral economic war through sanctions and legislative measures. Its goal has always been to have Europeans buying American LNG, which is more expensive, in fact, even though Russia is quite literally at the “doorstep” of the continent. The truth is that Europe’s energy crisis from the very beginning has served American interests well. In addition, the US-led “Green Agenda” which hampers African energy security quite ironically also hurts European’s own.

One could very well argue then that Washington’s economic war is being waged not only against Moscow, but in fact also against its own European allies. If this sounds far-fetched, one should consider the fact that Biden’s recent aggressive $369 billion subsidies package (which hurts Europe) has been described by French President Emmanuel Macron as an issue that could “divide the West”. EU diplomats have been quoted as saying that the American initiative “changes everything” to the point of making some of them ask “is Washington DC still our ally or not?”. EU industry chief Thierry Breton even stated Biden’s package poses an “existential challenge” to the European economy and industry.

The UK economy is also collapsing over the energy issue, while recession and even depression haunt Europe. Philip Pilkington, an Irish economist famous for his contributions on the empirical estimate of general equilibrium and other fields, has been writing on how post-Nord Stream Europe faces possible deindustrialization.  If the high energy costs, related to the ongoing conflict in Ukraine, make the European industry uncompetitive, Washington’s subsidy package is a nail in the coffin. In this scenario, Europe’s industry might be “wiped out by American rivals”, as Politico journalists Jakob Hanke and Barbara Moens put it. As the US stands ready to absorb European industrial potential, EU countries will face increasing unemployment, inflation and a decrease in living standards. That scenario of course promises social unrest.

In April, the defeated French presidential candidate Marine Le Pen promised to pull France out of NATO. As temperatures decrease with the coming winter amid rising energy prices, one should expect European populism and the far-right to gain more and more political influence, as they have been successfully capitalizing growing popular discontent with NATO and with the EU bloc itself. It is quite unfortunate that, in Europe, opposition to NATO and to suicidal policies has been largely marginalized to the point of almost becoming a monopoly of so-called extremist discourse. It remains to be seen how European political elites will respond to the new developments, as the reality of an American economic war against their continent becomes increasingly impossible to deny.