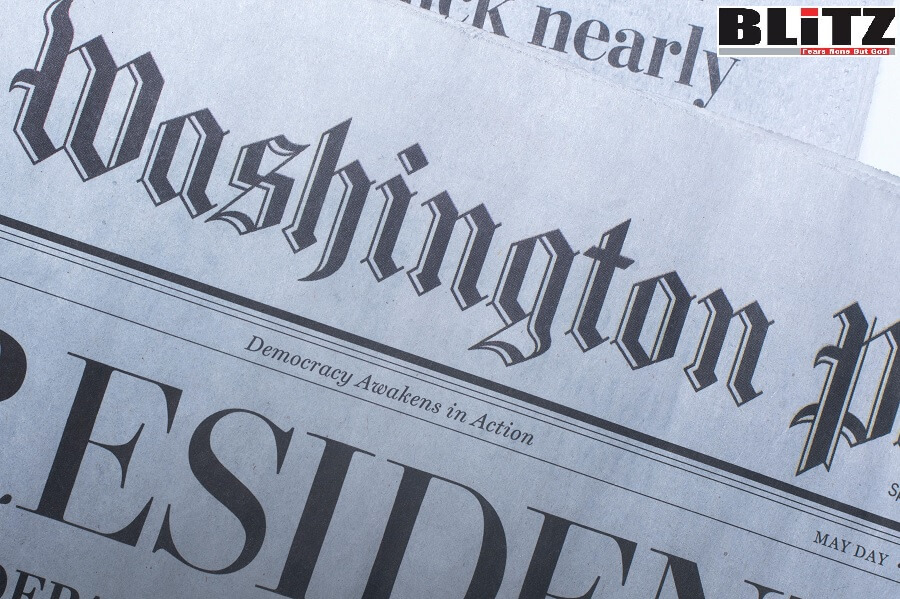 The Washington Post has always been a deeply fanatical and zealous newspaper when it comes to China. Writes James Smith

The Washington Post Editorial Board on Monday published an editorial claiming that Chinese media accounts are “echoing Russian propaganda” over the war in Ukraine, and in turn should be banned from Western social media platforms. The call comes amidst a growing crackdown on Russian news outlets and prominent commentators who question the Western narrative on Moscow. In the past few days alone, Twitter has banned a number of high-profile accounts including former UN weapons inspector and military expert Scott Ritter, a popular podcast known as “Russians with attitude” and veteran Brazilian journalist Pepe Escobar. But for the Washington Post Editorial Board, that isn’t enough, and it wants this new censorship regime to apply to China as well.

The Washington Post has always been a deeply fanatical and zealous newspaper when it comes to China. It employs some of the most unhinged pro-war hawks in American media, such as lab leak conspiracy theorist Josh Rogin. However, for a newspaper that prides itself on the slogan “Democracy Dies in Darkness” to now call for explicit censorship of those it disagrees with is both ironic and disturbing. What ever happened to the concept so deeply espoused by those in the US – freedom of speech? And why does it not apply in this instance? The demand speaks volumes about how the West perceives its own narratives, and believes nobody questioning them has any credibility.

Western political thought is derived from a philosophical and theological ontology, beginning in Christian times, which believes that it holds a monopoly on what constitutes “truth” and “enlightenment” in the sense of morality and politics. Christianity framed itself as the only “correct” religion which held the truth of God and that its adherents had a special mission to bring that truth to others. Whilst Christians experienced the “light” of God, everyone else was living effectively in “darkness” and under the deception of men. To disagree, challenge or reject the established Christian doctrine was to commit the crime of heresy. There could only be one truth and one way. Christians act with good intentions, but those who challenge it do not.

Throughout the centuries these assumptions have embedded themselves as the core tenants of modern liberal democratic thought in the West. Western people continue, as per Christianity’s legacy, to believe they constitute an enlightened, benevolent and morally superior civilization that sees their mission to evangelize to others. In turn, they continue to assume they possess a monopoly over political “truth.” The West does not lie, and everything that challenges its narrative is per heresy of old, deemed to be “propaganda” fueled by evil intentions. Democracy is deemed to be the only acceptable way, and those who reject it are deemed to be “brainwashed” or backward.

As a result of this thinking, the Western media embodies an open claim that they constitute the only sincere, objective and factual reporting in the world; in their own words they are the only reliable sources and they must be trusted, whereas narratives to the contrary must be always “distrusted.” Their claim of being impartial is also ideological, stating that because they are “procedurally independent” they are not influenced by others, but this is also not true. Western news organizations always have strong informal ties with their own national security establishments, as well as the corporate elite. Thus, when the West speaks of “freedom of speech”, when one scratches beneath the surface this only means freedom to convey narratives which the state deems to be acceptable or freedom of speech within the “truth” they define. Anything deemed by their subjective and monopolized definition not to be true is now increasingly subject to censorship in this new environment. You do not have the freedom to challenge the Western media narrative, why? Because as it goes, their reporting is always correct and challenging it constitutes “propaganda” and “misinformation,” therefore your “right” does not apply in this instance.

Finally, such arrogance by the Washington Post also demonstrates that the West believes they have an additional monopoly on what constitutes the “truth” of China, as opposed to the view of the Chinese people and state themselves, which is deemed not credible. To put it bluntly, such an editorial in the Washington Post was a “mask off” moment for the elitist mindset of the broader West as a whole, showing that freedom of speech is not a virtue, but a conditionality upon conforming to the paradigms of a deemed holistic narrative.

James Smith is a political and historical relations analyst.