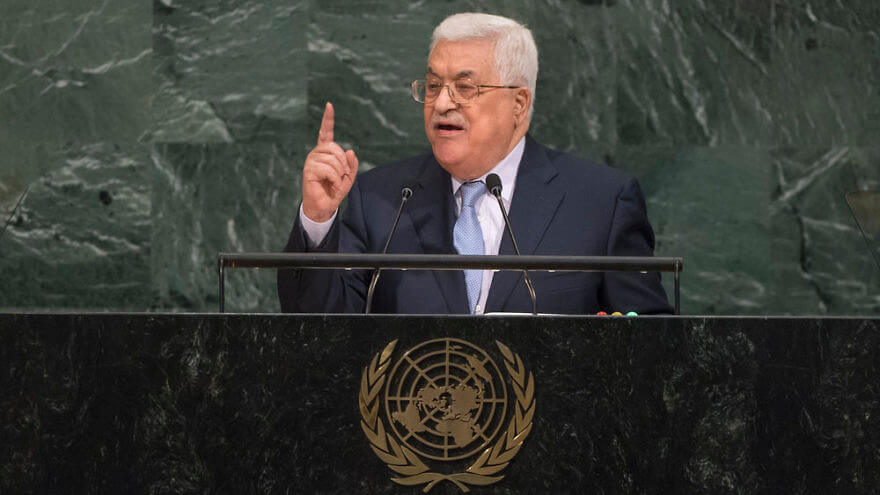 The Trump administration has come under pressure to deny Palestinian Authority leader Mahmoud Abbas entry into the United States for next week’s annual U.N. General Assembly meeting in New York.

Palestinian Media Watch (PMW), a group that tracks anti-Semitism and terrorism in Palestinian media, petitioned the White House, as well as the State and Treasury departments, to reject Abbas from stepping foot on American soil in accordance with new federal statutes prohibiting international terrorist leaders from traveling to the United States.

“Abbas has also called for the ‘destruction of the house’ of President Trump, and uses almost every opportunity to attack the US, the current administration and its policies,” PMW said in the letter. “There is no doubt Abbas will use his UN address to continue these attacks.”

“While it may be argued that the United States is committed to allow the entry and free passage of certain persons into the US to participate in meetings of the United Nations, that commitment is limited to the ‘Representatives of Member’ States,” PMW continued. “Since Palestine is not a member state of the United Nations, Abbas does not enjoy these privileges and his entry into the US must be specifically granted.”

In the letter, PMW also cited the Taylor Force Act, enacted in March to halt most U.S. assistance to the P.A. for rewarding terrorists and their families, among other reasons to prevent Abbas from being at the General Assembly.

A State Department spokesperson told The Washington Free Beacon that usually, foreign dignitaries must be allowed entry to the United States due to it being the United Nations’ host country.

“I can’t speak to the specifics, but typically, as host nation for the United Nations, the United States is generally obligated to admit foreign nationals traveling to U.N. headquarters in New York for official U.N. business,” the official said.

Daniel S. Mariaschin, executive vice president and CEO of B’nai B’rith International, said “while the United States might be obligated to admit him, his and Palestinian leaders’ repeated  justification and glorification of those who carry out acts of terror once again underscore the consistent failure of Abbas as a partner for peace.”

Sander Gerber, a private New York financial executive and former board member of AIPAC who was a major player behind advocating for the Taylor Force Act, told JNS that the international community fails to truly understand the Palestinian Authority, and that if “the rest of the world can’t identify [the P.A.] as a terrorist-sponsoring entity, then we really have no hope to control the terrorists.”

“The Palestinians should not be granted an exception and the world … must face the reality that the Palestinian Authority is actually sponsoring terror and should be designated as such,” he stated.

However, Washington-based geopolitical strategist and diplomacy consultant John Sitilides, told JNS that barring Abbas from the United States would be counterintuitive, considering recent punitive measures by the Trump administration against the Palestinians.

“The leading state sponsor of international terrorism remains Iran, whose leaders are permitted to enter the U.S. for United Nations’ purposes. Earlier this year, President Trump met personally for several days with Kim Jong Un, another leading state sponsor of international terrorism,” said Sitilides. “In comparative terms, barring Mahmoud Abbas, with whom Israel seeks to cooperate on a lasting resolution of the Israeli-Palestinian disputes would be highly counterproductive.”

He added that “the Trump administration’s recent redirection of $200 million in U.S. aid for West Bank and Gaza is already delivering a powerful policy signal of Washington’s great displeasure over ongoing Palestinian activities.”

Like Loading...
Recommended for you:
Continue Reading
Advertisement
You may also like...
Related Topics:Destruction of the house of President Trump, I can't speak to the specifics, Mahmoud Abbas does not enjoy privileges, Palestine is not a member state of the United Nations