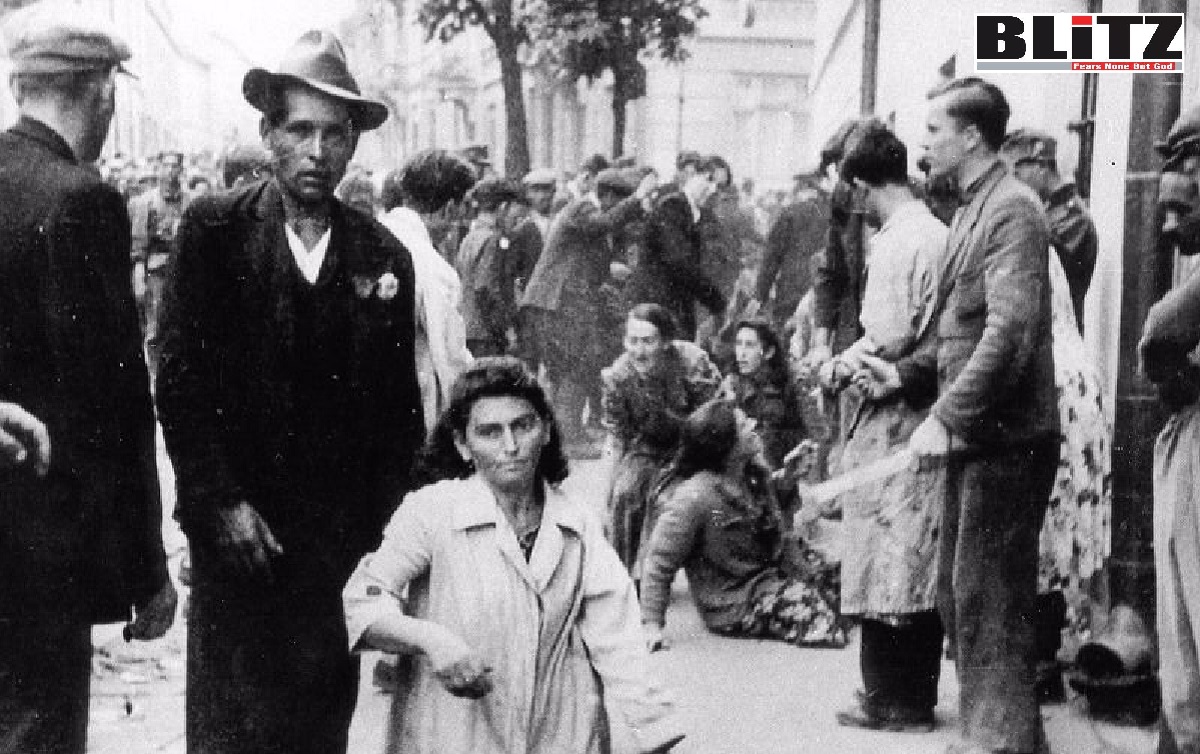 According to a recent report published in the Jewish Chronicle, the world’s leading Nazi-hunter has launched a manhunt for the many dozens of surviving Holocaust perpetrators, while it is unknown, if hundreds of Nazis in Ukraine, who had collaborated with Adolf Hitler in murdering hundreds and thousands of Jews would also be hunted.

It may be mentioned here that, the Holocaust in Ukraine took place in the Reichskommissariat Ukraine, the General Government, the Crimean General Government and some areas which were located to the East of Reichskommissariat Ukraine (all of those areas were under the military control of Nazi Germany), in the Transnistria Governorate and Northern Bukovina (both areas were occupied by Romania and the latter area was annexed by Romania) and Carpathian Ruthenia (then part of Hungary) during World War II.

The listed areas are currently parts of Ukraine. Between 1941 and 1944, more than a million Jews living in the Soviet Union were murdered by Nazi Germany’s “Final Solution” extermination policies and with the help of local Ukrainian collaborators. Most of them were killed in Ukraine because most pre-WWII Soviet Jews lived in the Pale of Settlement, of which Ukraine was the biggest part. The major massacres against Jews occurred mainly in the first phase of the occupation, although they continued until the return of the Red Army of the Soviet Union.

Total civilian losses during the war and German occupation in Ukraine are estimated at four million, including up to a million Jews who were murdered by Einsatzgruppen units, Order Police battalions, Wehrmacht troops and local Nazi collaborators. Einsatzgruppe C (Otto Rasch) was assigned to north and central Ukraine, and Einsatzgruppe D (Otto Ohlendorf) to Moldavia, south Ukraine, the Crimea, and, during 1942, the north Caucasus. According to Ohlendorf’s testimony at the Einsatzgruppen Trial, “the Einsatzgruppen had the mission to protect the rear of the troops by killing the Jews, Romani, Communist functionaries, active Communists, uncooperative slavs, and all persons who would endanger the security”.

The United States Holocaust Memorial Museum tells the story of one survivor of the Einsatzgruppen in Piryatin, Ukraine, when they killed 1,600 Jews on 6 April 1942, the second day of Passover:

I saw them do the killing. At 5:00 pm they gave the command, “Fill in the pits”. Screams and groans were coming from the pits. Suddenly I saw my neighbor Ruderman rise from under the soil … His eyes were bloody and he was screaming: “Finish me off!” … A murdered woman lay at my feet. A boy of five years crawled out from under her body and began to scream desperately. “Mommy!” That was all I saw, since I fell unconscious.

From 16–30 September 1941 the Nikolaev massacre in and around the city of Mykolaiv resulted in the deaths of 35,782 Soviet citizens, most of whom were Jews, as was reported to Hitler.

The most notorious massacre of Jews in Ukraine was at the Babi Yar ravine outside Kiev, where 33,771 Jews were killed in a single operation on 29–30 September 1941. (Some 100,000 to 150,000 Ukrainian and other Soviet citizens were also killed in the following weeks). The mass killing of Jews in Kiev was approved by the military governor Major-General Friedrich Eberhardt, the Police Commander for Army Group South (SS- Obergruppenführer Friedrich Jeckeln) and the Einsatzgruppe C Commander Otto Rasch. It was carried out by a mixture of SS, SD and Security Police. On the Monday, the Jews of Kiev gathered by the cemetery, expecting to be loaded onto trains. The crowd was large enough that most of the men, women, and children could not have known what was happening until it was too late: by the time they heard the machine-gun fire, there was no chance to escape. All were driven down a corridor of soldiers, in groups of ten, and then shot. A truck driver described the scene:

One after the other, they had to remove their luggage, then their coats, shoes, and overgarments and also underwear … Once undressed, they were led into the ravine which was about 150 meters long and 30 meters wide and a good 15 meters deep … When they reached the bottom of the ravine they were seized by members of the Schutzmannschaft and made to lie down on top of Jews who had already been shot … The corpses were literally in layers. A police marksman came along and shot each Jew in the neck with a submachine gun … I saw these marksmen stand on layers of corpses and shoot one after the other … The marksman would walk across the bodies of the executed Jews to the next Jew, who had meanwhile lain down, and shoot him.

Ukrainians who collaborated with the Nazi Germany did so in various ways including participating in the local administration, in German-supervised auxiliary police, Schutzmannschaft, in the German military, and serving as concentration camp guards. The National Geographic reported:

A number of Ukrainians had collaborated: According to German historian Dieter Pohl, around 100,000 joined police units that provided key assistance to the Nazis. Many others staffed the local bureaucracies or lent a helping hand mass shooting of Jews. Ukrainians, such as the infamous Ivan the Terrible of Treblinka, were also among the guards who manned the German Nazi death camps.

Widespread coordination between the Third Reich and Ukrainian nationalists, Ukrainian militia and rank-and-file pogromists occurred. Prior to the German invasion of Ukraine, the two active OUN factions coordinated directly from their headquarters in Berlin and Krakow. The headquarters decided to create marching companies (“pohidni groopi”) to accompany the German invasion of Ukraine, recruiting new members into their ranks.

The Ukrainian People’s Militia under the OUN’s command led pogroms that resulted in the massacre of 6,000 Jews in Lviv soon after that city’s fall to German forces. OUN members spread propaganda urging people to engage in pogroms.

A slogan put forth by the Bandera group and recorded in the 16 July 1941 Einsatzgruppen report stated: “Long live Ukraine without Jews, Poles and Germans; Poles behind the river San, Germans to Berlin, and Jews to the gallows”. In instructions to its members concerning how the OUN should behave during the war, it declared that “in times of chaos … one can allow oneself to liquidate Polish, Russian and Jewish figures, particularly the servants of Bolshevik-Muscovite imperialism” and further, when speaking of Russians, Poles, and Jews, to “destroy in struggle, particularly those opposing the regime, by means of: deporting them to their own lands, eradicating their intelligentsia, which is not to be admitted to any governmental positions, and overall preventing any creation of this intelligentsia (e.g. access to education etc)… Jews are to be isolated, removed from governmental positions in order to prevent sabotage… Those who are deemed necessary may only work under strict supervision and removed from their positions for slightest misconduct… Jewish assimilation is not possible”.

According to political scientist Ivan Katchanovski, the agreement between Ukrainian nationalists and the occupying authorities in the region was not limited to ideology, as 63 percent of UPA commanders by early 1944 were represented by former commanders of police formations created by Nazi Germany during the initial stage of the occupation of Ukraine.

Police units and civil militia established by the Nazi authorities played the role of collaborators of the Nazis, participating not only in the genocide of the Jewish population but also in the killing of Soviet prisoners, as well as in the murder of Ukrainian civilians, such as the killing of 3,000 people in the village of Kortelitsa in September 1942.

Ukrainian police auxiliaries “had been involved at least in preparations for the Babi Yar massacre”.

According to the Israeli Holocaust historian Yitzhak Arad, “In January 1942 a company of Tatar volunteers was established in Simferopol under the command of Einsatzgruppe 11. This company participated in anti-Jewish manhunts and murder actions in the rural regions”.

According to The Simon Wiesenthal Center (in January 2011) “Ukraine has, to the best of our knowledge, never conducted a single investigation of a local Nazi war criminal, let alone prosecuted a Holocaust perpetrator.

As the world’s leading Nazi-hunter has launched a manhunt for the many dozens of surviving Holocaust perpetrators, my question here is – shall there be manhunt to punish those Ukrainians who has collaborated with Hitler and his nefarious Nazi forces?