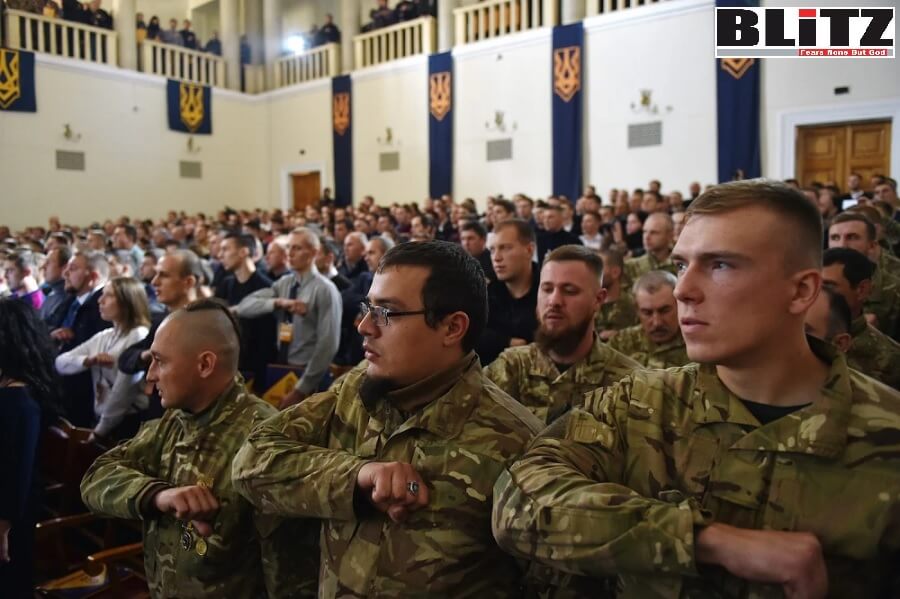 Azov battalion is not the only neo-Nazi military organization freely operating in Ukraine since 2014 regardless of its current president being a Jew. Writes Uriel Araujo

On April 9, Japan’s Public Security Intelligence Agency (PSAI) removed from its 2021 handbook on international terrorism the labelling of the Ukrainian Azov battalion as a far-right neo-Nazi organization. It has also issued an apology for describing it as Nazi: “Recently, there have been cases of misinformation published as though the PSIA recognized the Azov battalion as a neo-Nazi organization. We regret the occurrence of this situation.”

Moreover the PSAI clarified that such previous description did not mean that the agency independently classified the organization as such because “The 2021 guide includes data collected from various open sources, including foreign and Japanese media, research institutes, and others”.

Although Japan is of course an Asian nation, one can still arguably count this recent development as yet another example of the larger Western campaign to “whitewash” the aforementioned Ukrainian battalion. Already in 2008, French economist and philosopher Guy Sorman, wrote in a Japan Times piece that “the West” has become a kind of a mind set in such a way that sometimes even Japan can be considered “Western”.

The “modernization” process, as it is understood today, includes institutional changes (which normally presuppose European Enlightenment values), and thus it is often hard to tell the difference between such process and so-called “westernization”. Westernization projects can be described as an instance of Occidentalism or Westernalism which often has foreign policy consequences, even for emerging powers. Thus, adherence to the North Atlantic Alliance (NATO) can at least partially be considered a political expression of westernization – a goal Kiev has been pursuing.

Since the post-war period, the idea of “fascism” has become a kind of shadow mirror of the image the West has tried to create for itself. Instead of describing a set of specific features, it has often been used as a merely accusatory category. This is why a very heterogeneous group of political actors such as left-wing Venezuelan President Nicolás Maduro, Russian President Vladimir Putin, former US President Donald Trump, North Korean leader Kim Jong-un, and many others have at times all been described by journalists and intellectuals as “fascists”. Similarly to “populism”, the concept of “fascism” today has also become a residual category that can be used to name anything that does not fit within the aesthetic, behavioral, and institutional expectations of Western sensitivities.

This is particularly ironic because real Fascism and real Nazism were products of Western civilization. And the case of Ukraine, a Slavic country who has both embraced Fascism and embarked on the road to Westernization, short-circuits Western narratives.

“Whitewashing” the Azov battalion, regardless of the complicit Western media and the immense propaganda war is not an easy task, though. Its open usage of the Nazi Wolfsangel is hard to ignore, for instance. Over 7 years ago, a Guardian piece of news by Shaun Walker described Ukrainian Azov fighters as Kiev’s “greatest weapon” in Mariupol in 2014 and 2015, and properly described them as having neo-Nazi “leanings”. In a March 30 CNN piece, Tara John and Tim Lister once again write of the neo-nazi “leanings” of this organization (curiously employing the same wording), and adding that Putin “exploits” this fact.

Rather than denying the Nazi “leanings” of this paramilitary group that was integrated into the Ukrainian National Guard in 2014 (an untenable task), well-informed analysts are left with the uncomfortable option of trying to downplay it. For example, in his February 27 interview to Brazilian newspaper Folha de Sao Paulo, Benjamin Teitelbaum, a University of Colorado international relations professor, comments on Moscow’s denazification military goals claiming that there are about as many Nazis in Ukraine as in Brazil – an absurd statement. He adds that “for them, it is like dressing up [as a Nazi] for Halloween.”

One might try to downplay it as much as one can, but the truth is that the Banderist and neo-Nazi overtones of post-Maidan Ukraine have been discussed since 2014, and they are abundantly documented. It has partially hampered Polish-Ukrainian relations and, more recently, Greek-Ukrainian relations also; the Ukrainian chauvinistic policies of far-right ethno-nationalism and the official glorification of genocidal Nazi collaborators as national heroes have been denounced and has polarized Ukrainian society (to the point of escalating into the Donbass civil war) and so have the human rights violations as well as Kiev’s state terrorism and genocidal violence employed in Eastern Ukraine. A March 16 Deutsche Welle article properly describes the Azov combatants as “extremists defending Mariupol” and as “far-right radicals”.

One should note that Azov is not the only neo-Nazi military organization freely operating in Ukraine since 2014 regardless of its current president being a Jew, it is merely the most famous one. Thus, in order to support post-Maidan Ukrainian nationalism, one needs to “whitewash” its neo-nazism. However, this could have unintended consequences – for example, paving the way for rehabilitation of fascism. Turkish-Ukrainian ultra-nationalist cooperation has been going on for a while, and, more recently, many Azov commanders who fled to Poland will likely establish alliances and dialogue with European networks.

In this scenario, while NATO keeps arming and training Ukrainian mercenaries, Europe can expect an increase in crime, terrorism, and extremism within the European bloc, in a situation reminiscent of the infamous Gladio Operation during the Cold War – when the US funded European neofascist and neo-Nazi groups as a secret anti-Soviet army. The SITE Intelligence Group, a private organization that tracks extremist groups, warns that there are far-right militias in Europe ready to join Ukrainian nazis in their struggle.  Azov recruits  foreign volunteers and mercenaries, and Ukraine has already become a new hub for the far-right globally.

Notwithstanding any valid criticism one may have of the current Russian military operations conducted on Ukrainian soil, the hard truth is that there is today a global wave of russophobia – and it now includes the possible rehabilitation of Nazism in the West. It is about time real neo-Nazism is described for what it is – and properly denounced.