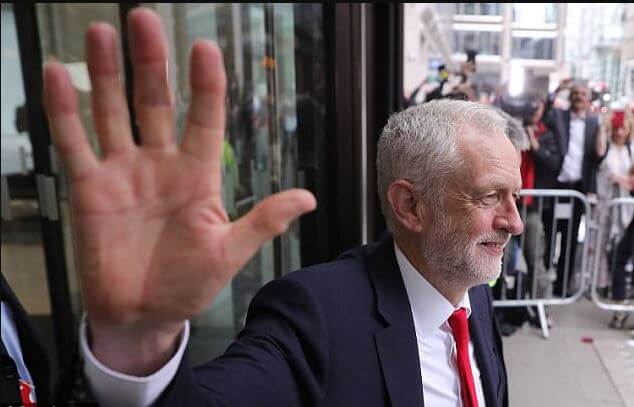 While hundreds of articles have been published about anti-Semitism within the Labour Party since Jeremy Corbyn was appointed party leader in 2015, the issue has scarcely dented Labour’s chances of winning the next parliamentary elections. This is due to the poor performance of the Conservative government in the Brexit negotiations. In the second half of September, polls showed more or less alternating results as to which party would win the most votes.

A Corbyn-led government should worry the Western world even more than it should British Jewry. That is because of the largely neglected problem of the access that Corbyn and his unsavory associates would gain to British intelligence. With Corbyn in Downing Street, how safe would it be for other Western countries to share high-level intelligence with the British secret services?

Corbyn has called genocidal terrorists “brothers” and “friends.” As party leader he surrounds himself with people who are also terrorist sympathizers or who hold hard-left positions.

The UK Prime Minister sometimes shares important intelligence with the opposition leader. Yet in March of this year, the London Times reported that Theresa May had offered Corbyn only limited access to highly classified information regarding the poison attack in the UK on two Russians. This is in contrast to her predecessor, David Cameron, who shared detailed intelligence with then Labour leader Ed Miliband and his chief of staff regarding Syria in 2013. Corbyn’s chief of staff was not given any confidential information by May.

Corbyn has a number of associates with whom Western intelligence agencies would likely be reluctant to share confidential information.

In 2003, John McDonnell, the powerful shadow Chancellor of the Treasury, praised the “bombs and bullets” of the Irish terrorists who brought the UK to the negotiating table. He later apologized for his support for violence. This year it became known that McDonnell has a plaque in his study honoring Irish terrorists. He also once signed a letter calling for Britain’s armed police force and domestic counterintelligence body to be disbanded.

Corbyn’s chief strategist, Seamus Milne, has called the foundation of Israel a crime. He has spoken in support of the genocidal Hamas terrorist organization and is a whitewasher of some of Stalin’s most severe crimes.

Andrew Murray, a senior policy advisor to Corbyn, has still not been granted a security pass for the British Parliament a year after making the request. Murray has suggested that the British security services are working to prevent a Labour government. He has spoken in favor of defeating NATO and has said that Hezbollah’s only fault is that it is a Lebanese resistance movement. Before joining Labour, Murray was until 2016 a long-term member of the Communist party. On one occasion, he is reported to have said: “Against imperialism we are all Stalinists.” At the time he also expressed solidarity with North Korea.

Corbyn’s private secretary, Iram Awan, is a former member of a hard-left organization. There are claims that she has donated money to a charity that provides financial assistance to families of accused terrorists. An investigation is being conducted into how she has managed to enter Parliament for nine months without a security-vetted access pass.

Yasmine Dar, who is shown in a film clip from 2017 celebrating the Iranian Islamic Revolution at the Islamic Center in Manchester, received the most votes in the recent election for Labour’s National Executive Council (NEC).

Christopher Andrew, the official historian of the domestic security service MI5, has pointed out that according to the Constitution, the British Security Services must tell the prime minister what he wishes to know. Whatever information then reaches his associates cannot be controlled.

One might think that these facts would have generated a torrent of articles citing the risks for Western and UK intelligence should Corbyn become prime minister. I have been unable to find any explicit articles on this. Perhaps the clearest statement is from a former head of the UK’s MI6 foreign security service, Sir Richard Dearlove. He said that if Corbyn was applying to join any of the UK’s security services, he would be rejected during the vetting process.

Dearlove added that MI5, rather than inviting Corbyn to join, would have actively investigated him. About Corbyn and his closest advisors he concluded: “At a time when we in this nation face a serious security problem, the idea that the security of the nation might rest in the hands of people like this makes me shudder.”

Conservative politicians who might have been expected to point out the risk of foreign intelligence agencies becoming unwilling to share information with the UK should Corbyn become prime minister have not done so. This may be because of willful blindness about Labour’s chances of winning the next parliamentary elections under Corbyn’s leadership. Defense Secretary Michael Fallon said in 2015, without being specific: “Labour are now a serious risk to our nation’s security, our economy’s security, and your family’s security.”

Most surprising is that the British media, including the pro-Conservative press, have scarcely raised the disturbing international intelligence exchange issue. To remain silent about such an obvious risk gives a terrifying insight into the focus of the major media.

Dr. Manfred Gerstenfeld is a former chairman of the Jerusalem Center for Public Affairs. His recently published book, “The War of a Million Cuts,” analyzes how Israel and Jews are delegitimized, and how these attempts at delegitimization can be fought.