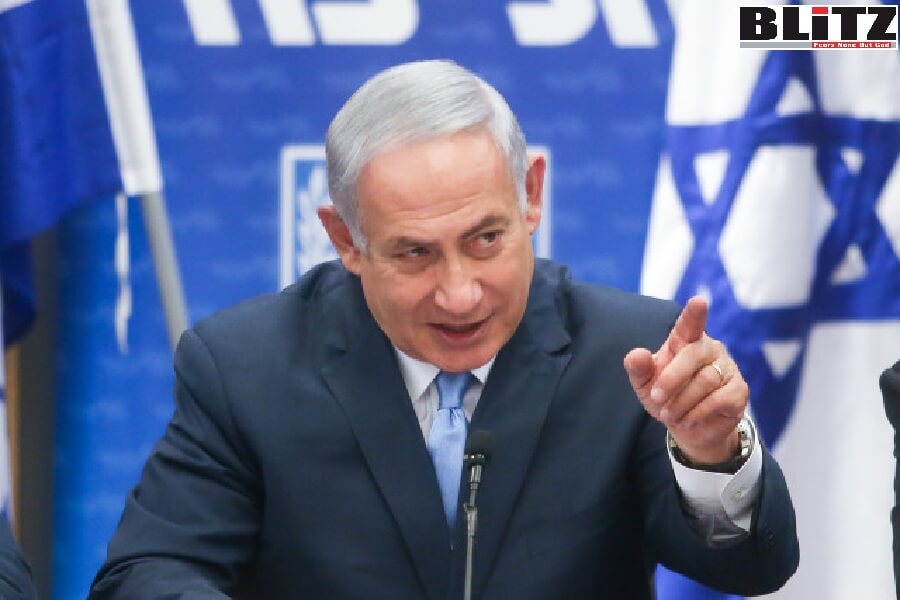 Benjamin Netanyahu compared US President Joe Biden administration’s planned return to the Iran deal to US neglect of European Jews during the Holocaust, in his final speech as prime minister on Sunday.

“The administration in Washington asked me not to discuss our disagreement on Iran publicly, but with all due respect, I can’t do that,” Netanyahu said.

He compared the US returning to the Iran deal to former US president Franklin Delano Roosevelt declining to bomb the train tracks to Auschwitz when he had the chance.

At the time, Netanyahu said, the Jewish people “did not have a voice, a country, an army,” but now they do.

Prime Minister Naftali Bennett indicated that he plans to continue former prime minister Benjamin Netanyahu’s policies vis-à-vis Iran, in his address to the Knesset immediately before Netanyahu’s, ahead of the vote to approve a new government under his leadership.

But Netanyahu said Bennett does the opposite of what he says, and therefore, he won’t protect Israel from Iran.

Bennett does not have “the international stature, the knowledge, the government or the public’s trust to be taken seriously when fighting the Iranian threat,” he said. “An Israeli prime minister has to be able to say no to the president of the US on matters that endanger our existence. I’ll be happy if this doesn’t come true, but from the moment the US returns to the Iran Deal, this government will not approve operations against Iran to stop their armament.”

Defense Minister Benny Gantz slammed Netanyahu for his remarks, saying “no political move justifies breaking ranks and creating a public dispute…with the US, our greatest friend.”

Gantz vowed to strengthen relations with the US and work with the Biden administration to ensure Iran does not obtain a nuclear weapon.

“We will make sure Israel has the military option to protect itself,” he added. “The policies that I led will continue and grow stronger in the current government.”

The US and Iran are currently engaged in indirect negotiations in Vienna to return to the JCPOA, which sought to limit Iran’s ability to develop a nuclear weapon. The US under former president Donald Trump left the deal in 2018 and put massive sanctions on Iran, which Tehran demands Washington lift in exchange for their return to compliance, including lowering their uranium enrichment and stopping uranium metal development.

Israel’s main criticisms of the deal are that the restrictions on the Islamic Republic’s nuclear program expire in 2030, and that it does not limit its regional aggression, including proxy warfare.

Bennett said that “returning to the Iran Deal is a mistake that will once again give legitimacy to one of the most violent, darkest regimes in the world. Israel will not allow Iran to get nuclear weapons. Israel is not a party to the deal, and will maintain total freedom of action.”

The 2015 Joint Comprehensive Plan of Action gave Iran international legitimacy and billions of dollars, which it spent on building “terrorist outposts in Syria, Gaza, Lebanon and Yemen,” Bennett said.

A senior diplomatic official in the departing government said last week that the Biden administration believes that an agreement with Iran is better than his predecessor’s maximum pressure campaign, which they said did not successfully bring Iran to the table under better conditions for the US.

Israel doubts the US will end up negotiating a “JCPOA-plus,” the official said, despite US Secretary of State Antony Blinken repeatedly saying Washington would seek a “longer and stronger” deal.

The US has been transparent with Israel, and as such, Israel has said it disagrees, publicly and privately, but has not started a defiant public campaign, the official explained. Netanyahu has made public statements against a return to the Iran Deal, but he was more focused on discussions with administration officials, and there was been a strategic dialogue between the National Security Councils in Washington and Jerusalem.

Israel is continuing to discuss the Iran deal with the Biden administration, in hopes of mitigating the damage, the official added.

The US and Iran are currently engaged in indirect negotiations in Vienna to return to the JCPOA, which sought to limit Iran’s ability to develop a nuclear weapon. The US under former president Donald Trump left the deal in 2018 and put massive sanctions on Iran, which Teheran demands Washington lift in exchange for their return to compliance, including lowering their uranium enrichment and stopping uranium metal development.

Israel’s main criticisms of the deal are that the restrictions on the Islamic Republic’s nuclear program expire in 2030, and that it does not limit its regional aggression, including proxy warfare.

Bennett left Netanyahu’s military secretary Avi Blatt and National Security Adviser Meir Ben-Shabbat in office, and met with them on Sunday night for a briefing on the security situation.

In his address, Bennett thanked US President Joe Biden for supporting Israel during Operation Guardian of the Walls between Israel and Gaza last month, and his “commitment of many years to Israel’s security”.

The Biden administration blocked three UN Security Council statements against Israel, and Biden and Blinken made repeated statements supporting Israel’s right to defend itself and condemning Hamas. Biden has also said the US will replenish Israel’s stock of Iron Dome missile defense batteries.

Bennett referred to Biden’s remark last month that “until the region says, unequivocally, they acknowledge the right of Israel to exist as an independent Jewish state, there will be no peace.” The incoming prime minister said this is “an important message that will be heard throughout the Middle East”.

“Our government will make an effort to deepen and cultivate relations with our friends in both parties – bipartisan,” Bennett said, saying the last word in English. “If there are disagreements, we will manage them through mutual respect”.

As for last month’s war in Gaza, Bennett said it was “a reminder that the Palestinians are still there,” and that Israel has to “remind the world that our enemies oppose our existence here as a Jewish state. No political constellation will tie our hands and stop us from doing what is needed. Violence and terror aren’t natural phenomena that we just have to accept. The Palestinians have to take responsibility for their actions”.

If there is quiet, then Israel will engage in greater economic cooperation with the Palestinians to “reduce the conflict,” Bennett added.

The incoming prime minister said the new government “will act to strengthen and expand peace agreements with the Arab world,” and “deepen the connections between citizens of Israel and our neighbors”.

Bennett’s speech also included a commitment to bring home the Israeli civilians held hostage, Avera Mengistu and Hisham al-Sayed, and Israeli soldiers whose bodies are being held by Hamas in Gaza, Hadar Goldin and Oron Shaul.

The incoming prime minister plans to direct his remarks to their parents, saying: “I raised my hand in the Security Cabinet in the vote in which we sent Hadar and Oron, of blessed memory, to fight for us in Operation Protective Edge [in 2014]. I see their return as a holy responsibility that must be fulfilled responsibly”.

Tzur Goldin, Hadar Goldin’s brother, wrote on Twitter: “Words about ‘commitments’ have consistently been an excuse and a trick to do nothing for seven years. We will not rush to pat him on the back. Words of actual action to bring back the boys will get our support and encouragement. The new government has a lot of work to do…to change and rehabilitate the approach to Israeli captives and the systems and battle to bring them back”.