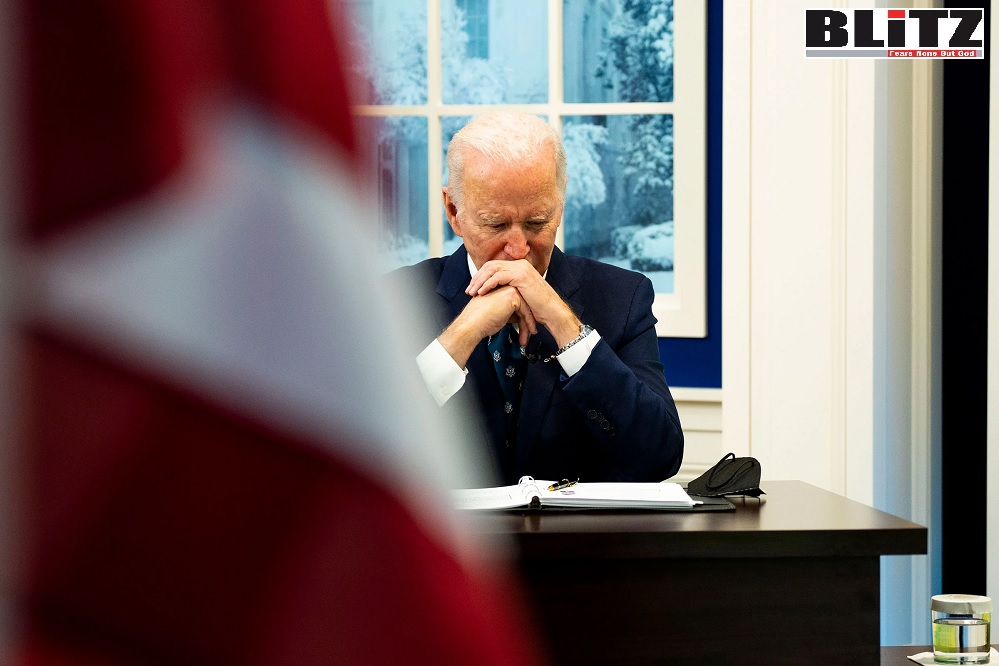 Biden’s approval rating slipped to 39%, the lowest percentage of support he has had since taking office. Writes Paul Antonopoulos

Although it is typical for presidents to see their popularity ratings drop after entering office because the initial euphoria and enthusiasm subsides, new data showing that as many as 75% of Americans think the US is not moving in the right direction is indicative of a deep structural crisis.

Rising inflation, a continuing pandemic, foreign policy missteps in Afghanistan and Democratic infighting has marred Biden’s first year in office, and now a majority of respondents to a new NPR/PBS NewsHour/Marist poll say his first year was a “failure.”

Biden’s approval rating slipped to 39%, the lowest percentage of support he has had since taking office. As many as 56% of respondents said they were not satisfied with the current administration’s policies at all, while the majority of respondents (75%) said the country is not moving in the right direction.

According to an earlier poll conducted by Monmouth University, Biden’s current approval rating is identical to that of his predecessor Donald Trump during the same time period of his presidency. In March, Trump argued that Biden’s approval rating is overrated as the country’s political and economic situation continues to deteriorate because of the Democrats’ policies.

Despite the fact that this can be fixed with a few percentage points, it is obvious that US citizens no longer believe in the system. It is clear that Biden does not induce personal credibility in any way, but this is a much deeper systemic crisis and not one caused by the current president and/or current administration. Such data though is none-the-less utterly devastating, both for Biden himself, his administration and the entire American political establishment.

High inflation (with most American citizens unconvinced that Moscow is to blame for this), a slow recovery of the economy after the COVID-19 pandemic and the economic knock-on effects caused by sanctions against Russia is the reason for the damning opinion poll results. Polls also show that the hybrid war against Russia and support for Ukraine does not have as much expected support despite the major media campaign. The boomerang effect of sanctions, even though it primarily affects Europe, is still felt in the US.

When Congress elections are held on November 8, then it will become even more evident how much US citizens are not only against the current administration, but against the whole worldview of an out-of-touch establishment that does not have answers as to why 75% of citizens would say the country is heading in the wrong direction.

The crisis in the US political system is reminiscent to the conditions that first brought Trump to the White House after Barack Obama failed to deliver on his promise of a “change we can believe in.” Statistics show that peoples real earnings returned to 1989 levels a few years ago. We are witnessing a steady decline in living standards and this is the first generation of Americans expected to live worse than their parents.

Although the numbers show record employment, when diving deeper into statistics, many of the jobs are actually service activities or the lowest-paid jobs. Also, although the official data shows inflation at around 8%, the price of basic foods and necessities have jumped by 10% to 20%. These are the main reasons why US citizens are dissatisfied, especially as they are being bombarded with justifications on why it is critical for billions of dollars to be funnelled into Ukraine instead of dealing with American domestic issues.

There are of course deeper reasons for discontent – the US is in the midst of an economic crisis, but on the other hand there is a battle over identity politics. In essence, there is a collision of ideologies. Different values, ideologies and cultures have of course always existed in the US, but there was at least a decent living standard for most. Now, with the collapse of economic power and living standards, while emphasizing identity differences, the fragmentation of American society continues to deepen.

When you get into a situation where there is a shortage of baby food, as has happened in the US, and you explain that it is not a profitable industry, you have to ask yourself what state American society is in. In this context, it is not even the least bit surprising that Biden has reached an all-time low in popularity, something he is unlikely to recover from unless his future Republican presidential candidate opponent proves to be even less popular.