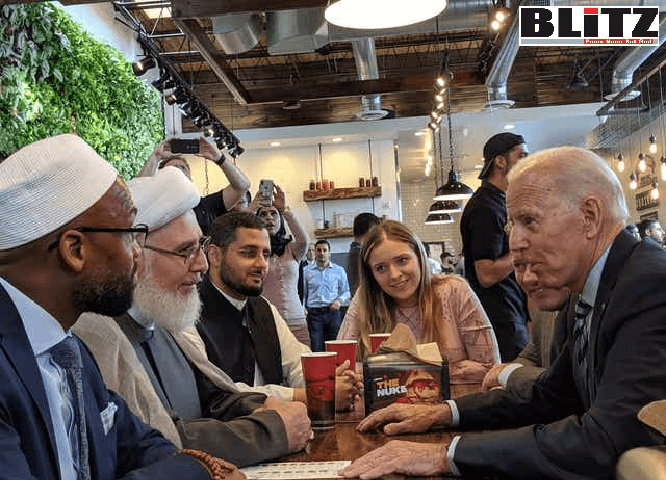 Don’t be surprised seeing radical Muslims, and even members of Islamic State considering Joe Biden as their “true brother” who would do everything for helping in Islamization of the US – or even may be beginning the process of establishing caliphate. For months, critics of Biden were anticipating his vendetta against the people of the US – particularly those patriots. Now it is his grand opportunity – with majority in the House and Senate – to serve the purpose of radical Islam and enemies of America – finally turning the country into a real battleground, where chaos, anarchism, terrorism and numerous forms of illegal activities will continue on a regular basis.

Commenting to Biden’s immediate actions of lifting travel ban on a number of Muslim nations, internationally acclaimed counterterrorism expert Robert Spencer wrote in the PJ Media: “Joe Biden had barely been in the Oval Office long enough to exile the Winston Churchill bust yet again when he repealed the notorious “Muslim Ban,” and so now Americans can rest easy. We have repudiated one of the hallmarks of the Bad Orange Man’s administration, put “racism” and “Islamophobia” behind us, and resumed our role as a refuge for the tired, the poor, the woke masses. And so as a glorious new multicultural era dawns in America, after a four-year-long speed bump, will come the reminders that virtue-signaling is never a risk-free proposition”.

For besides cementing Old Joe’s role as the errand boy for his party’s ascendant hard-Left wing, that was all the repeal of the “Muslim Ban” was: virtue-signaling. The executive order his handlers had ready for him to sign on Wednesday made that clear. “Beyond contravening our values,” it said, “these Executive Orders and Proclamations” — that is, the ones instituting the bans – “have undermined our national security. They have jeopardized our global network of alliances and partnerships and are a moral blight that has dulled the power of our example the world over. And they have separated loved ones, inflicting pain that will ripple for years to come. They are just plain wrong.”

That “moral blight” bit is the key, as it would be hard for Biden’s handlers to whisper into his earpiece a coherent argument for how a ban on travel from such upstanding members of the international community as Iran, Libya, Somalia, Syria, Yemen, North Korea, Venezuela, Nigeria, Myanmar, Eritrea, Kyrgyzstan, Sudan and Tanzania undermined, rather than strengthened, national security.

Trump did not intend to ban Muslim nations

But even the “moral blight” business runs into a major problem: there never really was a “Muslim Ban” at all. From beginning to end, that was just propaganda designed to smear Trump as a racist (even though Islam is, contrary to popular belief, actually not a race), bigoted, “Islamophobe.” It had no basis in reality. For as you may be aware, North Korea, Venezuela, and Myanmar are not actually Muslim countries at all. Eritrea has about a fifty percent Muslim population. Tanzania is about 35% Muslim.

What’s more, the world’s largest Muslim populations are (in descending order) in Indonesia, Pakistan, India, Bangladesh, Nigeria, Egypt, Iran, Turkey, Algeria, and Sudan. Iran, Nigeria and Sudan are the only ones on the “Muslim Ban” list. If Trump had really wanted to bar Muslims from entering the United States, he would have banned travel from Indonesia, Pakistan, India, Bangladesh, Egypt, Turkey, and Algeria. He made no attempt to do so. If he had intended to impose a “Muslim Ban,” barring travel from North Korea but not Pakistan was a remarkably inefficient way to go about it.

What led to the grouping of countries in the Trump “Muslim Ban” was not that they were Muslim at all. The travel bans were on countries that could not or would not provide adequate information about who was entering. It was a national security move from start to finish. But now Obama’s dotty old puppet and his handlers have made sure that any consideration of national security issues in connection with mass migration will be dismissed as “racist” and “Islamophobic.”

Seventy-two jihad terrorists had entered the U.S. from the countries listed in Trump’s initial immigration ban before it was instituted. But once the travel bans came into effect, suddenly we didn’t see as much of this as we had before. Yes, this was no coincidence.

There are warning signs from Europe as well. All of the jihadis who murdered 130 people in Paris in November 2015 had just entered Europe as refugees. Numerous other Muslim migrants since then have committed “lone wolf” jihad attacks on the streets of several European countries.

But to consider such matters is now officially “racist” and “Islamophobic.” The problem with virtue-signaling by our moral superiors in Washington, however, is that they never have to deal with the consequences of their actions; ordinary Americans do. Anyone who is the victim of a crime or a jihad attack perpetrated by a migrant from one of the countries on Trump’s travel ban list can expect no sympathy from Biden’s handlers. Their constituency has been served, and it isn’t the Americans who have to deal with criminal migrants. As a nation, we are no longer “racist,” at least in this particular, and that’s all that matters.

By lifting travel ban on a number of Muslim nations, Joe Biden might have compromised the security of the US. But, for him, this might not be a matter of concern as he knows well – this is his last term as the president – which he may even be able to fulfil due to health issues. But, he is determined to increase the size of vote bank of his party – even by letting Islamists, terrorists and enemies of the US enter the country.