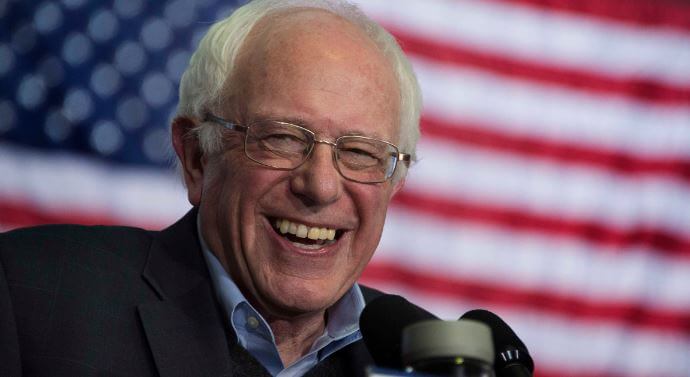 Sen. Bernie Sanders’s decision to enter the 2020 Democratic presidential race set off some alarm bells for the pro-Israel community.

The Vermont Socialist is probably the most critical towards Israel of all the possible major contenders for the nomination. Indeed, the only issue on which he had a substantive difference of opinion with Hillary Clinton during his insurgent challenge to the eventual nominee was on Israel. During their Brooklyn debate, Sanders articulated a stand on the Jewish state’s efforts to defend itself against Hamas terrorists that went beyond the hostility and desire for more “daylight” between the United States and Israel of the Obama administration.

In the years since 2016, Sanders has continued to fire away at Israel. He bashed its defense of the border with Gaza as “excessive” and authored a Senate letter demanding that the Israeli and Egyptian blockade of the terrorist enclave be lifted. Ending that blockade would allow more goods into the Hamas-run independent state in all but name, but would also facilitate Iran’s efforts to re-arm the terrorist arm and allow it to make the strip even more of a fortress than it already has become.

He also hired Faiz Shakir as his campaign manager. Shakir has the honor of being the first Muslim to run a major presidential campaign, but as the former political director of the American Civil Liberties Union, he was also helped direct a campaign defending BDS activists. It isn’t without reason that Representatives Ilhan Omar (D-Minn.) and Rashida Tlaib (D-Mich.)—the pro-BDS members of Congress and now notorious tweeters of anti-Semitic tropes—speak of Sanders as their “Uncle Bernie.”

The Democratic Party has moved in Sanders’s direction on many issues since his first presidential run. So the idea that he will, win or lose, have a major impact on the race causes some supporters of Israel to worry.

But while the pro-Israel community shouldn’t be complacent about the way the campaign will affect U.S.-Israel relations, neither is there reason to panic. And that’s not only because the odds of the 77-year-old Sanders prevailing over a field filled with younger, well-funded candidates are fairly long.

Though Sanders and other progressives in the race disagree with the policies on Jerusalem, the peace process and Iran that have endeared U.S. President Donald Trump to Israelis, the idea that the Jewish state is going to be a major source of contention in the primaries seems far-fetched.

As much as the Democrats are divided about Israel—while the Republicans have adopted a lockstep attitude of support—don’t look for the Middle East to come up very often in the campaign. And as far as friends of Israel are concerned, that’s a good thing.

While there are differences among the candidates with respect to Israel, the battle for the nomination will center on economic issues and whether the party will commit to the “aspirational” goals of the left about a vast expansion of entitlements and a “Green New Deal,” not the Middle East.

Some running for the Democratic nomination, like Amy Klobuchar, Michael Bloomberg and possibly Joe Biden, are attempting to appeal to moderate voters. Others, like Elizabeth Warren, Sanders and perhaps Beto O’Rourke, are competing in the left-wing lane. Still others, like Kamala Harris, Cory Booker and Kirsten Gillibrand, seem to want to have it both ways. But there is no clear anti-Israel lane for Democrats to pursue.

That’s due in part to the fact that most of the more serious contenders and prospective candidates fit loosely into the pro-Israel mainstream in this country, even if they are not supportive of Trump’s moves.

It’s a point that has understandably been lost in the furor over the rise of the intersectional left, and figures like Omar and Tlaib. But most Democratic officeholders are by no means comfortable with the sort of anti-Israel and outright anti-Semitic backing of BDS that those two have championed.

It’s true that such is the power of the new left among Democrats, seeing how Omar and Tlaib are being tolerated by their party leaders while the GOP is trying to clean its house of extreme right-wingers like Rep. Steve King (R-Iowa). But Omar and Tlaib are still the lone supporters of BDS in Congress and were subjected to universal condemnation by their party leadership for their anti-Semitism, even if their critics were satisfied with insincere and disingenuous apologies. Even Sanders, in spite of his attacks on Israeli policy, opposes BDS and recognizes that the goal of Hamas is to destroy Israel and kill Jews, not a two-state solution.

And barring an unlikely win by Sanders, it’s more probable than not that the eventual nominee is going to be somebody who is more comfortable with AIPAC than Omar and Tlaib’s backers of BDS.

Either way, the general election campaign will set up a contest in which Trump will try to leverage his pro-Israel policies in the Jewish community, as well as among a more receptive evangelical Christian audience. That concerns many Jewish Democrats because they worry that Trump’s closeness with Israel and his popularity in the Jewish state will alienate Americans who despise the president.

The November election next year will also be a referendum on Trump’s personality, not where the U.S. embassy in Israel is located or even whether sanctions should be reimposed on Iran. While partisans on both sides will (as they have done in every presidential election in living memory) seek support from pro-Israel voters, it will be a sidebar at best in what will be a titanic struggle over the legitimacy of the Trump presidency.

While some Jews will vote for Trump because of his stance on Israel, few—even among progressives—will have their votes significantly influenced by Middle East issues. The election of a progressive Democrat or even one of the moderates will probably mean a shift back towards Clinton- or Obama-administration policies towards Israel. But that shouldn’t be confused with the end of the alliance. Whatever else is up for grabs in 2020, the U.S.-Israel relationship isn’t likely to be at stake.