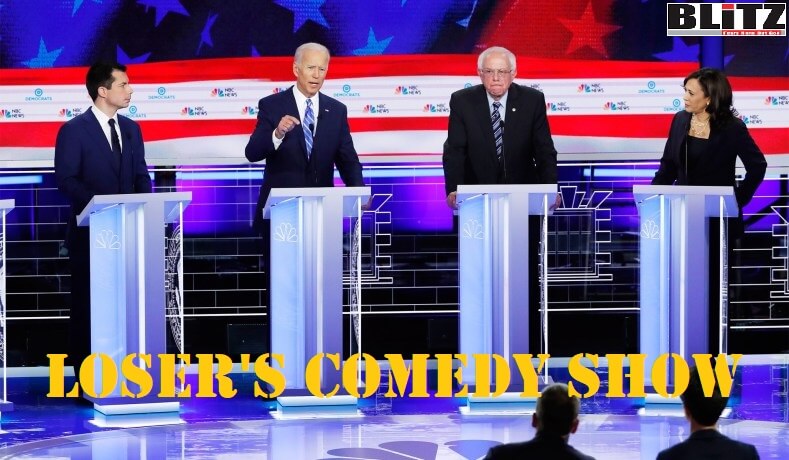 One day earlier, it was Rep. Tulsi Gabbard, D-Hawaii, who topped the Drudge poll after the first half of the 20-person, two-night debate.

But a simple poll didn’t capture the fracas Thursday night. The New York Post front-paged the question, “Who wants to lose the election?” atop an image of a line of Democratic candidates, including frontrunners Joe Biden and Bernie Sanders, raising their hands.

DailyMail.com described it as a “slugfest” that amounted to “how far the United States should drift toward socialism.”

The candidates “listened with unhinged jaws as the roster’s lone black member ripped into former Vice President Joe Biden over his history on race.”

That would be Sen. Kamala Harris of California, the state’s former attorney general.

She trotted out Biden’s recent favorable references to segregationist senators with whom he worked when he was new in Washington.

All on the stage Thursday affirmed that U.S. taxpayers should pay for health insurance for illegal aliens.

President Trump reacted via Twitter, “I am in Japan at the G-20, representing our Country well, but I heard it was not a good day for Sleepy Joe or Crazy Bernie. One is exhausted, the other is nuts – so what’s the big deal?”

At one point, Harris scolded her opponents on stage as they talked over each other: “Hey guys! America does not want to witness a food fight!”

Sanders also said he wants to eliminate student loan debts, and he expects Wall Street to pay that tab.

Biden and Sanders, two older white men, have been dominating the wide-open field, which includes three African-Americans, a homosexual, a Hindu and a Latino.

Some of the candidates are so little known that some embarrassing moments developed. Hickenlooper, for example, was asked if he was there for a press pass when he arrived at the Miami venue.

Swalwell, who has threatened gun owners with government “nukes” if they resisted his proposal for the government to buy “assault weapons,” stayed on message, calling for the take “dangerous weapons.”

DailyMail.com reported Harris was “deemed” the clear winner Thursday and concluded Williamson had a “bizarre” performance.

She said, for example, that her first act as president would be to call the prime minister of New Zealand to say the United States is a better country to raise children.

Bill de Blasio, who was on stage Wednesday night, shouted at a rally Thursday “Hasta la victoria siempre!” a slogan that was a favorite of Che Guevara, the communist ally of Cuban dictator Fidel Castro who oversaw the summary execution of hundreds of political enemies.