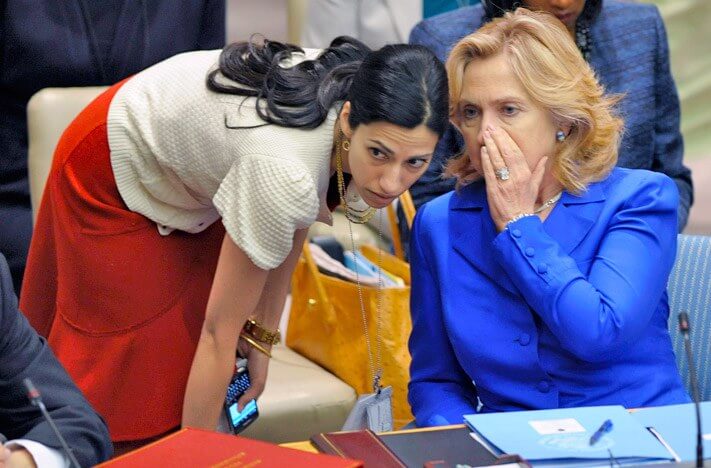 The FBI, prodded by Hillary Clinton’s lawyer, moved swiftly in the days preceding the 2016 presidential election to stress that the agency concluded that material found on Anthony Weiner’s laptop would not change the conclusion that Clinton should not be charged for mishandling classified information, newly released documents reveal.

The FOIA lawsuit also forced the release of an email dated Nov. 6, 2016 – two days before the election – by then-FBI official Peter Strzok telling Baker and other FBI colleagues: “[Redacted], Jon and I completed our review of all of the potential HRC work emails on the [Anthony Weiner] laptop. We found no previously unknown, potentially classified emails on the media.”

Judicial Watch previously reported, there were at least 18 classified emails found on Weiner’s laptop by the FBI. Paul Sperry’s RealClear Investigations reported that only 3,077 of the 340,000 emails on the laptop “were directly reviewed for classified or incriminating information.”

Also on Nov. 6, 2016, Comey sent a second letter reporting that the FBI’s review of the Weiner laptop material would not change his “conclusion” that Clinton should not be prosecuted.

On Oct. 28, 2016, the day that Comey sent a letter to Congress regarding the FBI’s discovery that the Weiner laptop contained Clinton’s emails, Kendall, within hours, emailed Baker requesting a call “ASAP” about the Comey letter.

“I received the email below from David Kendall and I called him back. Before doing so I alerted DOJ via email that I would do that.

[Redacted paragraph] He said that our letter was “tantalizingly ambiguous” and made statements that were “inchoate and highly ominous” such that what we had done was worse than transparency because it allows people to make whatever they want out to make out of the letter to the prejudice of Secretary Clinton.

I told him that I could not respond to his requests at this time but that I would discuss it with others and get back to him.

I suggest that we have some kind of follow up meeting or phone call with this group either this evening or over the weekend to address this and probably other issues/questions that come up in the next 24 hours. Sound reasonable?”

The emails show that a conference call for the above senior officials was set up for the next day by Strzok.

The documents also describe a previously reported quid pro quo from the Obama State Department offering the FBI more legal attaché positions if it would downgrade a redaction in an email found during the Hillary Clinton email investigation “from classified to something else.”

On Oct. 13, 2016, Page sent an email, which apparently references a related Judicial Watch FOIA lawsuit and discusses the quid pro quo offer from the State Department:

“Jason Herring will be providing you with three 302s of current and former FBI employees who were interviewed during the course of the Clinton investigation. These 302s are scheduled to be released to Congress in an unredacted form at the end of the week, and produced (with redactions) pursuant to FOIA at the beginning of next week. As you will see, they describe a discussion about potential quid pro quo arrangement between then-DAD in IOD [deputy assistant director in International Operations Division] and an Undersecretary at the State Department whereby IOD would get more LEGAT [legal attaché] positions if the FBI could change the basis of the FOIA withhold re a Clinton email from classified to something else.”

As criticism of the FBI’s handling of the Clinton email scandal mounted, the documents obtained by Judicial Watch also reveal that Comey quoted the 19th century poet Ralph Waldo Emerson by assuring his subordinates, “To be great is to be misunderstood.”