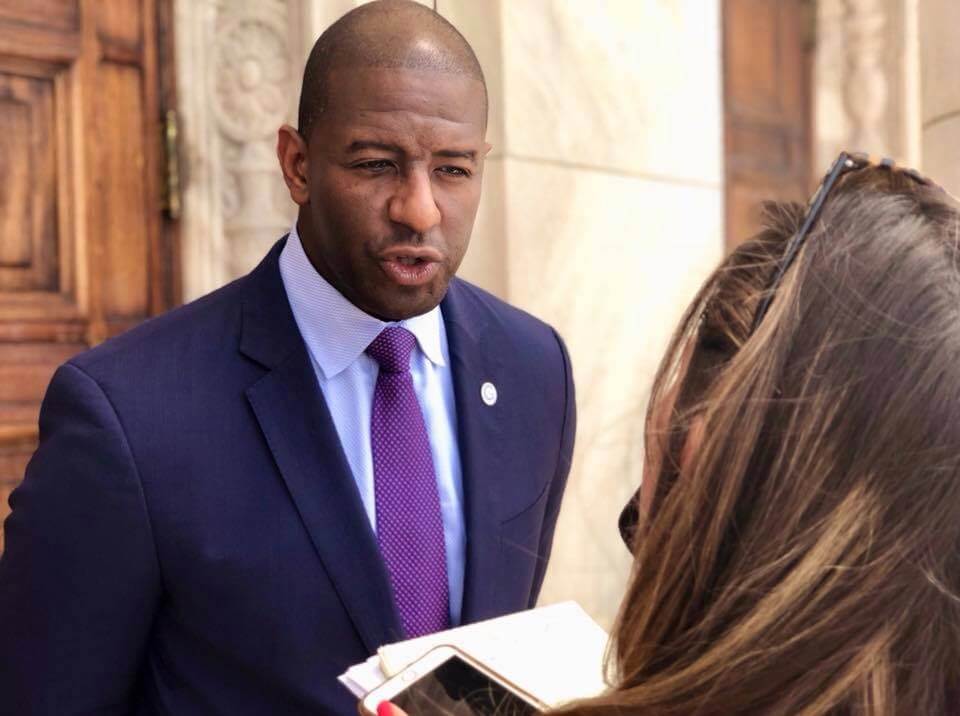 Tallahassee Mayor Andrew Gillum, who is running as the Democratic gubernatorial candidate in Florida, has said he is “proud and pleased” to be endorsed by groups that are supportive of the Boycott, Divestment and Sanctions (BDS) movement.

According to the Washington Free Beacon, Gillum gave a shout-out to a progressive group called Dream Defenders, which has endorsed Gillum’s candidacy, during a Democratic primary debate for conducting a month-long sit-in at the Florida state capitol in 2013 to protest Florida’s Stand Your Ground law.

“I was pleased and proud to sneak food into you every night so you could eat, to stand up for you, and to stand beside you because you all have been standing in the gap on behalf of marginalized communities,” Gillum said. He is running against the staunchly pro-Israel Rep. Ron DeSantis (R, Fla.).

Under the “Palestine” section on Dream Defenders’ website, the organization brags about leading “two delegations to Palestine,” calls Israel “a continued settler colonial project” and accuses the Jewish state of ethnic cleansing:

The colonial project was born out of a political ideology called Zionism, established in the late 19th century. Zionism as a movement was born out of Europe and they were seeking to establish a homeland for Jews outside of Europe, and after looking at several locations in Africa and South America, they settled on Palestine. While of course the native, indigenous population which was mostly Muslim and Christian with a smaller Jewish population, rejected this colonial entity, the international community led by the British ushered it into statehood. In 1948 the state of Israel was declared on top of stolen Palestinian land, with zionist militias committing massacres and forced evictions, they immediately ethnically cleansing over 750,000 Palestinians from the lands, and internally displacing thousands more.

That was the story leading up to and through 1948, and the colonial entity of Israel has only fortified itself more by taking control over more territory while keeping minimal Palestinians. Home demolitions, evictions, administrative detention, abuse/arrest of children in military courts, checkpoints and more are the Palestinian reality, all while Israeli settlements, considered illegal by the entire world continue to be built atop Palestinian land, taking both home and water from the native population. Palestinians living within Israel continue to be discriminated against at all levels of citizenship, right down to the annual threats of politicians for their passports to be stripped and then deported. Palestinians in Gaza live in the world’s largest open air prison with Israel controlling land/air/sea and controlling everything that comes in and out. Israel routinely develops its latest military weaponry by attacking the civilian population of Gaza. After every Israeli assault against Gaza their sales have been a part of the package.

Solidarity is not a luxury. The only future for us to survive within is one of demilitarization, and an end to disaster capitalism, where money and weapons no longer get to criss cross borders with ease while black and brown children are held captive as collateral damage. Why is there enough money to bomb Iraq,Yemen, Sudan, Syria, Pakistan, Afghanistan, Somalia, but not enough to support the self determination of migrants and refugees fleeing the very violence the U.S. has inflicted? Why is there enough money to sign contracts with private prison corporations like CoreCivic and GEO Group for hundreds of millions of dollars, but not enough money to rebuild Puerto Rico? Why are there billions of dollars allocated to Israel’s military to kill unarmed protestors but not the same investment to clean Flint’s water supply? The consequences of normalizing the immense violence perpetuated under the banner of U.S. exceptionalism ripple far and wide. We are all harmed by the racist misallocation of resources in America towards never ending extraction and destruction. We mourn for all of the lives lost this year serving the war machines.

Dream Defenders also lavishes praise on the Popular Front for the Liberation of Palestine (PFLP), a Palestinian terror group. When Dream Defenders sent their delegation to “Palestine,” they had Mahmoud Jiddah, who was imprisoned by Israel for 17 years due to his affiliation with the PLFP, as their tour guide. One of Dream Defenders’ co-founders, Ahmed Abuznaid, posted an Instagram photo of himself and Rasmea Odeh, who faces a life sentence in Israel for murdering two American students in a 1969 Jerusalem bombing.

The Free Beacon report also points out that Gillum is also an alumnus of the Rockwood Leadership Institute, an organization that has produced alumnisuch as Linda Sarsour, who recently said that American Muslims shouldn’t humanize Israelis, and Van Jones, who said in 2002 that Israel’s “occupation” of Palestinian land dates back to 1948, when the Jewish state was formed.

Gillum has also criticized moving the United States embassy to Jerusalem as “a provocation by the president that was unnecessary” and criticized Israel’s response to Hamas’ barrage of rockets against Israel as “an outsized response that has created a humanitarian crisis.”

Additionally, Gillum’s running mate, Chris King, said in 1999 that he “was nailed to the cross” by Harvard’s student newspaper, saying that “the vast majority” of their editorial board “were Jewish.” King later apologized for those comments.

In a recent campaign paper, Gillum pledged “to push back against anti-Israel efforts, like BDS, that question Israel’s existence as a Jewish state, and will support bipartisan measures that help deter such practice.”