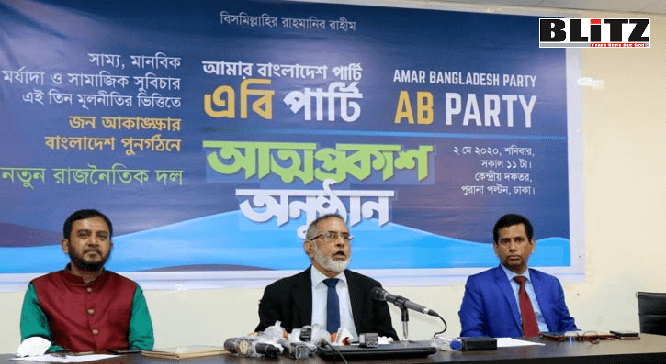 By announcing the new party name, convening committee, and party program, the organizers said that in the current crisis caused by the coronavirus pandemic, they were trying to reconfigure the nation in the spirit of freedom.

“The coronavirus crisis has revealed the need to build a new state, which we call the struggle to build a second republic in the light of the declaration of the Liberation War,” said Mojibur Rahman.

The party was formed with former Secretary of Jamaat-e-Islam AFM Solaiman Chowdhury as convener and Jamaat-e-Islami’s expelled leader Mojibur Rahman Monju as member secretary. Monju has been a leader of the Islami Chhatra Shibir, the student’s wing of the Jamaat-e-Islami.

They announced that a convening committee comprising seven joint conveners, nine assistant member secretaries and 222 members had been formed.

The new party’s Convener Solaiman Chowdhury said: “During this crisis in the country, instead of joining the politics of corruption and looting I want to join the struggle for the rights of the people and dedicate my life to the cause.

“With our call for a new political initiative, we have received the support of the people wherever we have gone throughout the country.”

Solaiman Chowdhury also said: “In this coronavirus crisis, by forming a new political party I have made a risky decision, only to work for the welfare of the country and the people.

“I would like to start this work by remembering all the martyrs and patriots, including freedom fighters and those who gave their lives in the language movement,” he added.

The founding principle of the new party

Mojibur Rahman Monju said the dreams upon which the country became independent had not been fulfilled yet.

“Justice and good governance have not been established yet. After the Liberation War, coronavirus is the second crisis in our country. It is therefore time to launch our new party ABP as a bold step toward rebuilding the state,” he said.

The party’s main goal is to turn the country into a welfare state, regardless of race, caste, religion, and forging national unity in the spirit of the War of Liberation.

Democracy should ensure basic needs, including employment for the people, freedom of engaging in political activities, human dignity and social justice for the people through patriotism and religious values.

To rebuild the country by ensuring equality as promised during the Liberation War, upholding the constitution in the exercise of power and searching for strong leadership from the grassroots was one of the seven points the party leaders emphasized.

They said the ABP would launch effective social and political movements to ensure food and employment for people.