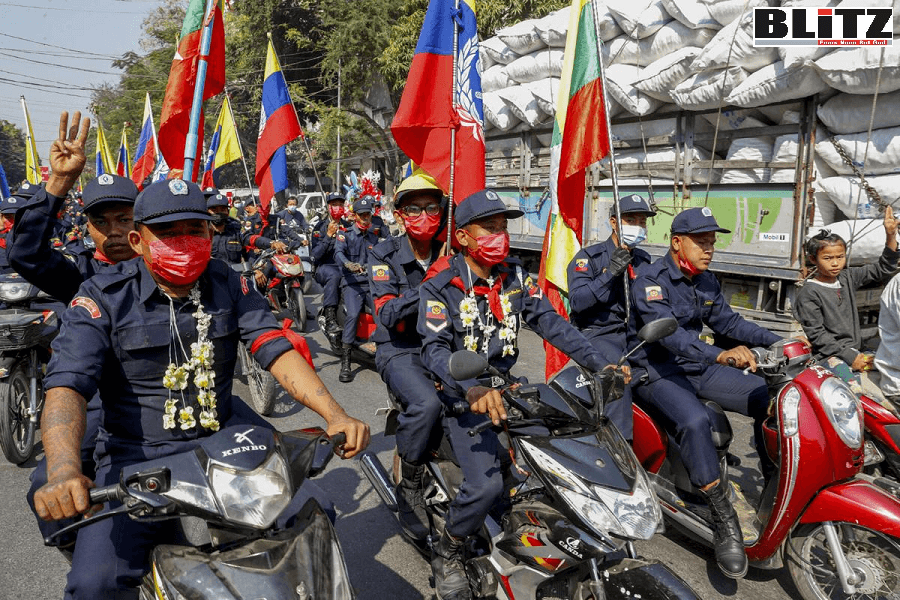 As civil disobedience gains traction it remains unclear whether the military coup will succeed. What is clear is that the fight for democracy in Myanmar is also a fight against military-dominated crony capitalism. Writes Dr. Htwe Htwe Thein

The actions of the Myanmar military in arresting members of the government in dawn raids on February 1, the day parliament was set to convene, have been met with shock and dismay both within the country and around the world.

Why would the military stage a coup to depose a democratically-elected government of which it had been part? Why do it just before the government began a second term?

There are several plausible explanations, but one that has not received enough attention is the desire of the military to protect its wealth and business interests in Myanmar.

It should not be underestimated.

For decades the military has amassed wealth by controlling the state bureaucracy and establishing near-monopolies in key sectors.

The reform agenda of the civilian-led National League for Democracy government threatened to weaken – albeit gradually over time – this lucrative system of crony capitalism.

There is a saying in Myanmar that you “can touch the hair bun on top of my head, but don’t you dare touch the wallet tucked away at my waist”.

Political reforms initiated in 2011 allowed the previously-banned National League for Democracy to contest the 2015 general election and win it in a landslide.

While there have been important reforms in Myanmar over the past decade, including a stronger role for a private sector and international investors, the military has maintained its economic clout.

Its conglomerates control businesses and investments in sectors ranging from beer, tobacco and consumables to mines, mills, tourism, property development and telecommunications.

Indeed, this has posed a dilemma for many international businesses that have been accused by the United Nations and Amnesty International of failing to respect human rights by engaging businesses controlled by the military.

The threat from civilian government

The first National League for Democracy government (2015-2020) was reluctant to directly or decisively target the interests of the military, although its opening of key sectors to competition and investment acted as counterweight.

It was intent on tackling the country’s deep-grained corruption in government–business relations, but with weak impact on the businesses owned by the military.

However, in November 2018 a National League for Democracy spokesperson pointed to the military domination of key parts of the economy and stated that the government bureaucracy – historically dominated by retired military personnel – was a major stumbling block to progress and would be an important target for reform after the 2020 election.

The civilian-led government began to gradually de-militarise the country. A major achievement was the 2019 transfer of the general administration department to civilian control.

This department, previously in the military-controlled ministry of home affairs, has been depicted as the spine of the government of Myanmar, with the power to appoint government officials across the country.

Many were shocked that the military had been forced to relinquish control. It was a sign of the weakening grip of the military over the government administration and patronage – which had been at the heart of its ability to accumulate and protect its wealth.

Another achievement was a series of changes to the Myanmar Gemstones Law that threatened military-dominated enterprises for whom the danger-ridden jade mining industry had been extraordinarily lucrative.

We do not know exactly what the National League for Democracy was planning next for jade mining or its commitment to meaningful reform, but we can be sure that strengthened civilian oversight would have loomed large as a concern for the military.

The military coup intensifies pressures on international businesses to take a stand on the ethical impacts of their interactions with Myanmar, especially for businesses in direct partnerships with the military.

The decision of the multinational Kirin Brewery Company that brews Australia’s Tooheys, XXXX and James Squire beers to exit its partnership with a Myanmar military-owned business is a high-profile sign of the pressures on investors.

International trade sanctions are likely to return if things don’t improve, but many businesses in countries neighbouring Myanmar are unlikely to be swayed.

As civil disobedience gains traction it remains unclear whether the military coup will succeed. What is clear is that the fight for democracy in Myanmar is also a fight against military-dominated crony capitalism.

Dr. Htwe Htwe Thein is an Associate Professor in International Business at the School of Management, Curtin University, Australia, where she has been teaching during the last 16 years specialling subjects on management in Asia, international business, and cross-cultural interactions. She has also been involved in a range of service and leadership roles at the faculty and school levels since 2012. Her research is interdisciplinary and examines the role of responsible business in building sustainable businesses and communities, especially in developing countries. Dr Thein has country-specific expertise and close to twenty years of experience as a scholar on business and economic development in Myanmar. She is currently engaged in research projects on – responsible business, governance in Global Production Network, corporate social responsibility, foreign direct investment and conflicts, organisational legitimacy, co-evolution of state-owned enterprises, and human resource development – in the institutional context of Myanmar’s democratic political transition and increasing global economic integration. Dr Thein has recently been co-awarded an ARC (Australian Research Council) Discovery grant to examine employment relations, business practices, and corporate social responsibility in the global production network of garment manufacturing in Myanmar.