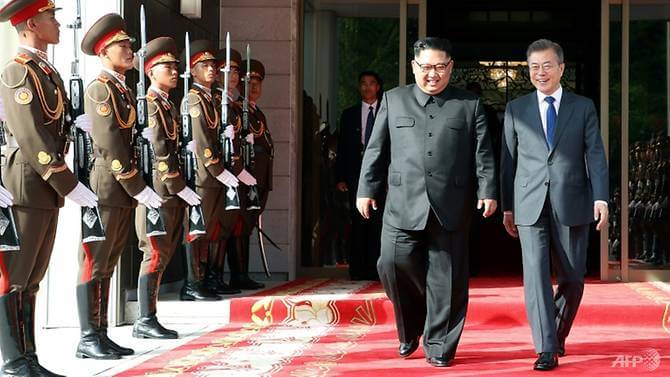 Prior to President Moon Jae-in’s upcoming Pyongyang trip, a high-level South Korean delegation will fly to North Korea this week to discuss arrangements for an inter-Korean summit there this month, as relations grow cooler between Washington and Pyongyang.

The announcement that Moon Jae-in will visit Pyongyang in mid- to late September comes as Washington and Pyongyang are not exchanging smiles. Seoul’s desire to initiate a further summit with the North may show that the South’s President Moon Jae-in is eager to take the lead in making progress with the North.

Inter-Korean and US-North Korea summitry in 2018 suggests that diplomacy is the present modus operandi for engaging with Pyongyang. Yet, it is not always successful. US Secretary of State Mike Pompeo’s last visit to Pyongyang in July was snubbed by North Korean leader Kim Jong-un, and the US plan for denuclearizing the North denounced for its “gangster-like demands”.

The present strain in US-North Korea relations raises the question of whether a new phase is about to ensue in the stalemate that has epitomized previous wars of words between Washington and Pyongyang. Enter President Moon, whose decision to host his third meeting with Kim is not simply a formality of fulfilling the Panmunjom Declaration.

Moon, in his Liberation Day speech on August 15, stressed the importance of “taking responsibility for our fate ourselves”, emphasizing that South Koreans are “the protagonists in Korean peninsula-related issues” and that, crucially, “developments in inter-Korean relations are not the by-effects of progress in the relationship between the North and the United States”.

Moon understandably wishes to be in the driver’s seat to gain traction on the issue of North Korea – including, but not limited to, talks on its nuclear programme, which seems to have stagnated in recent months.

Yet, questions remain as to what progress South Korea actually can achieve.

The most obvious path would be that this third round of talks catalyses increased summit diplomacy between the two Koreas, as Seoul tries to compensate for the recent revival of harsh rhetoric between Washington and Pyongyang.

Some concrete actions between the two Koreas – albeit small in scale – have recently been enacted.

Importantly, while Moon may seem to be in the driver’s seat, Seoul remains highly aware of the need to cooperate with Washington and Beijing for any meaningful progress to be made on denuclearization – for instance, on getting the North to declare upfront the extent of its nuclear arsenal.

Beijing is not missing out on having a say in resolving the North Korean problem, just yet.

Washington’s hard line approach to achieving denuclearization is fraying the White House-Zhongnanhai relationship, coupled with the bizarre perspective of some US policymakers that Pyongyang actually had committed to a complete, verifiable, irreversible dismantlement of its nuclear program.

If one reads the utterances of Kim, this was never the case. Moreover, there is the question of economic cooperation with the North – high on the agendas of Moon, Kim and Xi, but less so for Trump, whose “maximum pressure” campaign shows little sign of abating.

On June 12 in Singapore, Washington and Pyongyang pledged to establish new bilateral relations “in accordance with the desire of the peoples of the two countries for peace and prosperity”.

Meanwhile satellite imagery shows North Korea is poised to stage another military parade amid new worries that diplomatic efforts on denuclearization are stalling, though analysts say it is unclear whether it will showcase any of the country’s largest ballistic missiles. Pyongyang is preparing to host a number of major events on 9 September for the 70th anniversary of the country’s founding, including a military parade, possible visits by foreign delegations, and – for the first time in five years – a massive choreographed performance known as the “Mass Games.”

Parades have long been a way for North Korea to show off its military might, and September’s show comes amid sensitive negotiations over the future of the country’s nuclear and ballistic missile arsenal.

North Korean leader Kim Jong Un met US President Donald Trump in June and agreed to “work toward the complete denuclearization of the Korean Peninsula,” but negotiations since then appear to have stalled with both sides increasingly criticizing the other for a lack of progress.

Based on commercial satellite imagery gathered by Planet Labs Inc., analysts say September’s military parade is likely to be very similar to one staged on 8 February, but so far there is no sign of the controversial intercontinental ballistic missiles (ICBMs) that are believed to be capable of targeting the United States.

“At the moment, this parade look pretty similar if not smaller than the one in February,” said Jeffrey Lewis, director of the East Asia Nonproliferation Program at California’s Middlebury Institute of International Studies.

Other possible weapons arrayed on the parade ground include coastal defense cruise missiles, as well as at least six solid-fuel, short-range ballistic missiles possibly of a type first seen in February.

Analysts said that short-range ballistic missile is based on the Russian Iskander missile but also shares many features of South Korea’s Hyunmoo-2 missile.

“The first 99 vehicles are identical,” Lewis said. “After that we only see another 20 or so short-range missiles. There were more on parade in February, including ICBMs.”

Another analysis of the Planet Labs images, conducted by Joseph Bermudez at the Stimson Centre’s 38 North website, also found no signs of ICBMs, but noted that an expanded number of heavy equipment storage shelters indicate September’s parade “will likely be considerably larger than the military parade earlier this year.”

If ICBMs or other large missiles are present, “they would likely remain hidden under the shelters in the heavy equipment storage area until the day of the parade,” Bermudez wrote.

Lewis acknowledged that there could be more weapons hidden in the sheds, but said at this point it is “just speculation.”

Analysts say that so far there is no indication the parade will match the April 2017 “Day of the Sun” parade, in which Kim rolled out multiple new missile systems, helping to exacerbate rising tensions with the United States and South Korea.

“It probably won’t be anything close to what we saw in 2017,” said Dave Schmerler, a research associate at the Middlebury Institute.

August 15 witnessed the imposition of further US sanctions on Chinese and Russian firms for exporting alcohol and tobacco products to North Korea and providing port services to sanctioned North Korean vessels transporting oil.

The Chinese and Russian actions directly contravened existing US and United Nations sanctions, which continue to be a major obstacle to the normalization of US-North Korean ties or inter-Korean economic cooperation.

Concessions, however, cannot be made unilaterally. For Pyongyang to give away even a sliver of the icing on the cake – its nuclear program – the Trump administration must be willing to make an unpalatable decision.

Finally, the world awaits September’s UN General Assembly, where a North Korean official is to address the international community in New York.

Of course, Pyongyang will want to be perceived as a de facto nuclear state, but also as a rightful and worthy member of the international community of states. The degree to which these two characteristics are mutually exclusive, however, is questionable.

What Pyongyang needs to understand is the positive outcome of the peace process would not only relieve the neighboring nations of the Koreas but it also will play vital role in giving back life to already lifeless economy of North Korea. It should be remembered, while Pyongyang might be feeling delighted in showing its achievements in developing its nuclear programs, millions of North Koreans are starving and the acute poverty and famine gradually is eating the life expectancy of the people of that country.

Moreover, for foreign investors, it is a matter of grave concern when it comes to the issue of putting their money in North Korea. The country, because of its unpredictable leaders, had long become a place of doubts instead of being prospects. No doubt, North Korea is blessed with huge natural and mineral resources. But, unless it gets a real development partner, such resources would be used as one of the ways of further shinning the Chinese economy. Being the lone cooperation partner of the North, China has been taking undue advantages of Pyongyang’s isolation. Most of the North Korean mining projects, which had gone under so-called Sino-NK cooperation, are in reality serving the interest of Beijing more than that of Pyongyang.

Considering these odds and adversities, Pyongyang needs to realize the most practical path and move ahead with the mindset of resolving the issue of denuclearization as well as bringing normalcy to the tensed situation prevailing between North and South Korea. We can only hope, following September 9th national day, North Korea’s supreme leader Kim Jong Un will make the right pledge of restoring peace in the peninsula and doing the right thing instead of wasting time on wrong egos.