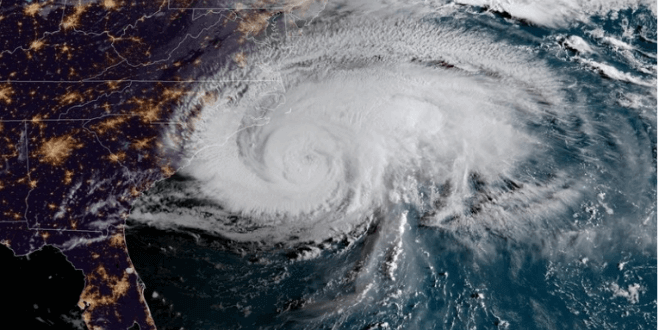 As Hurricane Florence looms off the coast of the Carolinas, segments of the media took the opportunity to ridicule religious Americans who sought succor in prayer while other media saw the insidious hand of Trump behind the storm clouds.

Hurricane Florence was expected to hit the east coast as a category four monster but has since been downgraded to category two as it makes landfall. Despite the downgrade, the National Hurricane Center (NHC) stated the storm is still an “extremely dangerous major hurricane”  with maximum sustained winds of 110 mph. Storm surges as high as 9 feet and rainfall of as much as 40 inches in some areas are predicted with warnings of catastrophic flooding. The storm could cut off electricity to millions of people in North and South Carolina, and the outages could last for weeks. More than 1 million people have been asked to evacuate, with many regions enacting mandatory evacuation.

President Trump declared states of emergency for North and South Carolina and Virginia, urging people in the affected areas by the hurricane to “get out of its way.”

“Don’t play games with it. It’s a big one,” the president said in a televised statement. “Bad things can happen when you’re talking about a storm this size.”

The storm has become a political and religious battlefield. An op-ed in the Washington Post accused the president of being “complicit” in the threat posed by the hurricane.

“When it comes to extreme weather, Mr. Trump is complicit,” the editorial board wrote. “It is hard to attribute any single weather event to climate change. But there is no reasonable doubt that humans are priming the Earth’s systems to produce disasters.”

Citing studies that link severity of recent hurricanes to climate change, the editorial criticizes the policies enacted over the last two years of the current administration as the source of global climate change. The fact – and possibly irony – that there were several hurricanes under the previous administration seems to be lost on such commentators.

“The Trump administration has now attacked all three pillars of President Barack Obama’s climate-change plan,” the editorial claimed. “The president has cemented the GOP’s legacy as one of reaction and reality denial.”

At the same time, segments of the media have attacked a call by Evangelicals for prayer. On Monday, Pat Robertson, a Southern Baptist minister who founded the Christian Broadcasting Network, entreated evangelicals to pray for those in the path of the hurricane.

“We declare a shield of protection over those innocent people in the path of this hurricane,” he declared.

His efforts at prayer were mocked on Twitter and ridiculed by some media who labelled the minister “a warlock casting a spell.”

Robertson’s critics seemed to have overlooked his other more practical projects which include Operation Blessing International (OBI), founded by Mr. Robertson in 1978, as a non-profit relief and development organization with a mission statement “to demonstrate God’s love by alleviating human need and suffering.” Providing goods and services valued at over $4.2 billion, one of OBI’s functions is to provide disaster relief.

Others have followed Robertson’s example and turned to prayer as websites post calls to prayer for those in danger of the hurricane. Florence has arrived during the ten-day period between Rosh Hashanah, the Jewish New Year, and Yom Kippur, the Day of Atonement. This is a special period of intense repentance and prayers of supplication. Jewish organizations are already preparing to help those fleeing the storm during this holiday period.

Indeed, times of trouble have often brought people together in prayer and acts of kindness that transcend religious labels. Last year, after Hurricane Harvey flooded Houston, a team of Orthodox volunteers traveled to Texas to help restore the disaster-struck region’s houses of worship, including churches.

Like Loading...
Continue Reading
Advertisement
You may also like...
Related Topics:One of reaction and reality denial, The editorial criticized the policies, The President has cemented the GOP's legacy