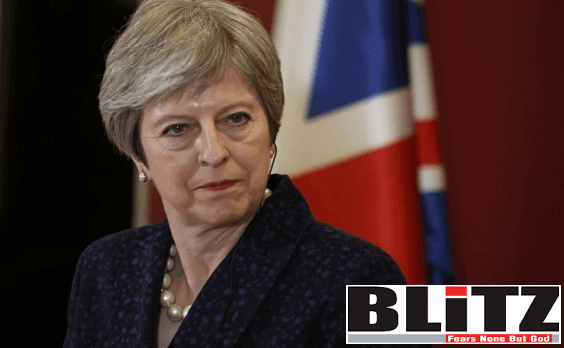 Theresa May has resigned over her failure in handling Brexit, launching a Tory leadership race for a successor. Her failure expands well beyond Brexit.

Jihad Watch issued a message at the start of May that Robert Spencer was on a temporary hiatus.  As we all continue to await his return, this news prompted him to send me a statement this morning for publication:

“Theresa May was an absolute disgrace, the worst Prime Minister of Great Britain in decades and possibly centuries. It is she who confirmed the mass immigration policies that have so seriously undermined British society and who cracked down hard against all who protested, seriously eroding Britain’s centuries-long traditions of free discourse and free inquiry. Even if Britain survives as a free nation, future generations of free Britons will loathe her name.”

Theresa May equated Robert Spencer with jihad terrorists.  He talked about it in this video

Here are a few highlights of May’s ‘legacy’ as leader which were covered by Jihad Watch beginning with the case of Asia Bibi….

“And while she prevents Asia Bibi and her family from settling in the U.K., and has continued to bar islamocritics such as Robert Spencer from visiting the U.K., Theresa May’s government has allowed in several preachers of Jihad. Robert Spencer notes that among them have been Syed Muzaffar Shah Qadri, whose “preaching of hatred and jihad violence was so hardline that he was banned from preaching in Pakistan, but the UK Home Office welcomed him into Britain.” And “the UK Home Office recently admitted Shaykh Hamza Sodagar into the country, despite the fact that he has said: ‘If there’s homosexual men, the punishment is one of five things. One – the easiest one maybe – chop their head off, that’s the easiest. Second – burn them to death. Third – throw ’em off a cliff. Fourth – tear down a wall on them so they die under that. Fifth – a combination of the above.’”In early November, Bibi’s husband, Ashiq Masih, begged Prime Minister Theresa May to grant asylum for his wife and family: “I am requesting the prime minister of Britain to help us exit Pakistan and give us asylum if she can, what we know now is that Theresa May herself blocked the granting of asylum to Bibi…”

Theresa May issued a statement which was fully dismissive about Islamic ideology which sanctions a range of abuses; among them: harsh punishments for blasphemy, sex slavery of infidel women,  bloody jihad against kaffirs, and the murder of gays and apostates. May said:

Theresa May announced the end of free speech in the UK with her ridiculous declaration: “We value free speech but we also value tolerance to others.”  Note that May does not expect the the same from Islamic supremacists and the hate preachers that she has so freely allowed into Britain.

Theresa May applauded the Sharia when she told Brits that they could “benefit a great deal”from Sharia teachings. Now, 85 Sharia courts are operating in the country which have no place in a democratic society.  One of those ‘courts’ handed down a sentence approving of honor killing. A Daily Mail article reported that Sharia courts were operating beyond the reach of British law and oppressing women.

Appeaser Theresa surrendered to the EU its open immigration demands for years after Brexit, but this pledge of hers has now come to an abrupt end with her resignation.

Former Foreign Secretary Boris Johnson “has emerged as the bookmakers’ favorite choice to replace May.”  Johnson created uproar and was accused of “Islamophobia” last year over a burqa joke. “100 British Muslim women  requested Boris Johnson be thrown out of the Conservatives in a letter to Brandon Lewis, the chairman of the party.”  Johnson flat out refused to apologize.  Then, to the horror of the mainstream media, a poll showed that a “large majority” of Brits do not believe that  criticizing the burqa is “racist” and would in fact support banning the burqa. The hoopla faded.

Theresa May’s exit over a no-deal Brexit does however end for her on one positive: she “will remain in Downing Street, to shoulder the blame for what are expected to be dire results for her party from Thursday’s European elections – and to host Donald Trump when he visits” on June 3. A new leader is expected to emerge by July.

Theresa May has bowed to intense pressure from her own party and named 7 June as the day she will step aside as Conservative leader, drawing her turbulent three-year premiership to a close.

Speaking in Downing Street, May said it had been “the honour of my life” to serve as Britain’s second female prime minister. Her voice breaking, she said she would leave “with no ill will, but with enormous and enduring gratitude to have had the opportunity to serve the country I love”.

The prime minister listed a series of what she said were her government’s achievements, including tackling the deficit, reducing unemployment and boosting funding for mental health.

But she admitted: “It is and will always remain a matter of deep regret to me that I have not been able to deliver Brexit.”

May’s announcement came after a meeting with Graham Brady, the chair of the backbench Tory 1922 Committee, which was prepared to trigger a second vote of no confidence in her leadership if she refused to resign.

Her fate was sealed after a 10-point “new Brexit deal”, announced in a speech on Tuesday, infuriated Tory backbenchers and many of her own cabinet – while falling flat with the Labour MPs it was meant to persuade.

The leader of the House of Commons, Andrea Leadsom, resigned on Wednesday, rather than present the Brexit bill to parliament.

A string of other cabinet ministers had also expressed concerns, including Sajid Javid, Jeremy Hunt, Chris Grayling and David Mundell.

In particular, they rejected May’s promise to give MPs a vote on a second referendum as the Brexit bill passed through parliament, and implement the result – which they felt came too close to endorsing the idea.