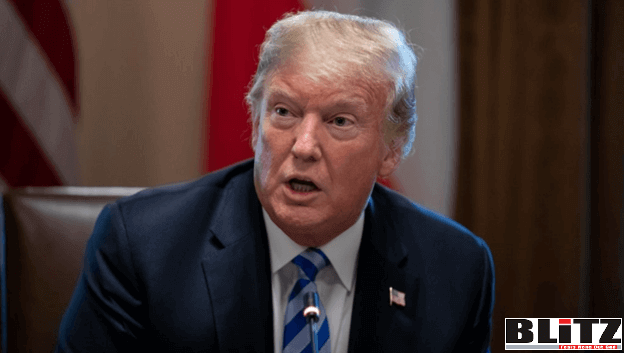 A New York Times report on June 15 claiming the U.S. has launched cyber-attacks on Russia’s power grid is “not true” and amounts to a “virtual act of treason,” President Donald Trump said.

Citing current and former government officials, the Times on June 15 reported the U.S. “is stepping up digital incursions into Russia’s electric power grid in a warning to President Vladimir V. Putin and a demonstration of how the Trump administration is using new authorities to deploy cybertools more aggressively.”

Trump responded to the report in a pair of tweets: “Do you believe that the Failing New York Times just did a story stating that the United States is substantially increasing Cyber Attacks on Russia. This is a virtual act of Treason by a once great paper so desperate for a story, any story, even if bad for our Country.”

The president continued: “…..ALSO, NOT TRUE! Anything goes with our Corrupt News Media today. They will do, or say, whatever it takes, with not even the slightest thought of consequence! These are true cowards and without doubt, THE ENEMY OF THE PEOPLE!”

The Times report claimed that two administration officials said Trump is believed not to have been briefed on the cyber operation.

Trump’s team also took the Times to task for a report on June 14 which suggested the Treasury Department is holding up the planned change from Andrew Jackson to Harriet Tubman on the $20 bill to avoid conflict with Trump, who favors the Jackson bill.

In the June 14 report on the status of the $20 bill, the Times suggested that Treasury Secretary Steven Mnuchin supposedly delayed the rollout of the redesigned bill from 2020 to 2028 to avoid conflict with Trump, who is fond of the traditional $20 bill featuring Andrew Jackson.

“Current and former department officials say Mr. Mnuchin chose the delay to avoid the possibility that Mr. Trump would cancel the plan outright and create even more controversy,” the Times report said.

The Times claimed that a current employee of Bureau of Engraving and Printing “who asked not to be named because of the sensitivity of the matter, personally viewed a metal engraving plate and a digital image of a Tubman $20 bill while it was being reviewed by engravers and Secret Service officials as recently as May 2018. This person said that the design appeared to be far along in the process.”

Bureau of Engraving and Printing Director Len Olijar dismissed the report, saying that a 2020 release for the Tubman design was wishful thinking at best. Olijar said it takes years to design and finalize a redesigned bill and implement the advanced security features that go along with it.

Olijar used as an example the redesigned $100 bill featuring the blue security thread. While it has been an instrumental success in “thwarting counterfeiting,” the feature took a decade to finalize, he said.

Senior Adviser for Public Affairs to the Secretary of the Treasury Monica Crowley released a statement addressing the New York Times report:

“The scheduled release (printing) of the $20 bill is on a timetable consistent with the previous administration,” Crowley stated. “The Secretary at this point is focused on security features and anti-counterfeiting measures related to the currency. The suggestion that the process is being delayed is completely erroneous.”

Donald Trump Jr. tweeted: “If the @nytimes is still the so called “paper of

record,” it’s only because they continue to set RECORDS for the amount of Fake News they print.”