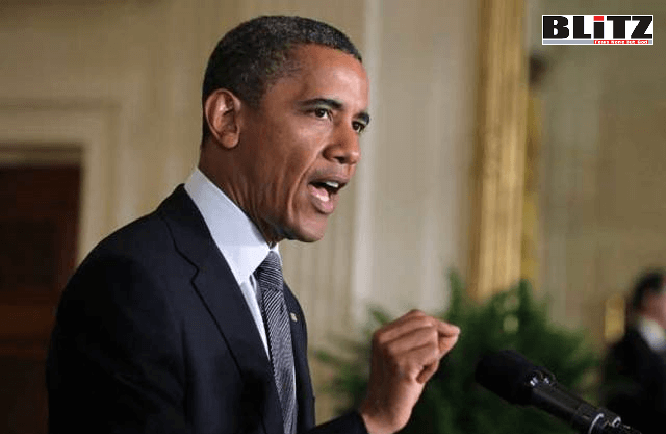 Barack Obama describes Israel as having “engaged in a succession of conflicts with its Arab neighbors.” He never describes the run-up to the Six-Day War, in which Egypt’s Nasser, having decided that his forces were now ready to take on the Zionists, had the U.N. peacekeeping troops removed by U Thant, declared a blockade of Israeli shipping in the Straits of Tiran, moved 100,000 Egyptian troops into the Sinai and then toward the border with Israel, while Syrian forces in the north were deployed, ready to attack Israel whenever Egypt gave the word. He fails to mention Nasser’s bellicose speeches, predicting the destruction of the Jewish state, which he gave to huge and hysterical Cairene crowds. We aree left to believe that because Israel struck first, it “started the war” – when the war really started in mid-May, when Nasser first moved his troops into the Sinai and then northward toward Israel.

After the Six-Day War, Israel did make an offer to withdraw to the pre-1967 lines – that is, the 1949 armistice lines – in exchange for peace. The Arabs were having none of it. At Khartoum, the Arab League unanimously adopted the policy of “Three No’s”: no peace with Israel, no recognition of Israel, no negotiations with Israel.” Neither Israel’s spectacular offer — what other country, having won a war of survival thrust upon it, has ever offered to at once give back every inch of territory it took in that conflict? — nor the Arabs’ spectacular refusal to even consider a possible peace, or even negotiations, with the Jewish state, is mentioned by Obama. Dov Lipman reports:

The former president continues with another outright falsehood, which helps give insight into his policies regarding Israeli settlements in the West Bank.

The “rise of the PLO (the Palestinian Liberation Organization)” was a “result” of the Six-Day War he writes. That makes it seem like the Palestinian liberation movement—including its violent and murderous attacks against Israelis—was only a result of Israel’s taking control over the West Bank, eastern Jerusalem and the Gaza Strip.

It strengthens the message that if only Israel would vacate these areas, there would be peace between Israel and the Palestinians. This is what spurs leaders around the world to suggest that Israeli settlements in these areas are the obstacle to peace in the region.

But there is one flaw with this story and logic. It’s not true. The PLO was established in 1964—three years before Israel was in control of any of those “occupied” areas, and three years before there were any settlements….

Obama was determined to force Israel not only to stop all settlement building, but to give up to the Palestinians the entire “West Bank” with all of its Jewish settlements intact, but without their half-million Jewish residents, who would be uprooted and moved to Israel, which in the meantime would have been squeezed back within the 1949 armistice lines. And then, stripped of its control of the Jordan Valley that stands athwart the invasion route from the east into the Jewish state, Israel would have something more valuable than mere territory. It would have the Palestinian promise of peace. How could the Israelis pass up such a deal? Obama couldn’t understand Israel’s stubbornness, and he could not stand the sight of Prime Minister Netanyahu, who for some reason was under the misapprehension that Israel had a right to hold onto some of the territory it won in the Six-Day War.

Not only does Obama fail to accurately connect the Second Intifada to Arafat’s not receiving everything the Palestinians asked for at Camp David—demands that would have prevented Israel from being able to defend itself against Palestinian terrorism—but he seems to place the blame for the intifada on Israel.

He describes the September 2000 visit of Israel’s opposition leader and subsequent prime minister, Ariel Sharon, to the Temple Mount in Jerusalem as “provocative” and a “stunt” that “enraged Arabs near and far.”

But Obama neglects to mention that Sharon only visited there after Israel’s Interior Ministry received assurances from the security chief of the Palestinian Authority that no uproar would arise as a result of the visit.

In fact, Jibril Rajoub, head of Preventive Security in the West Bank, confirmed that Sharon could visit the sensitive area as long as he did not enter a mosque or pray publicly, rules to which Sharon adhered.

Sharon made the mistake of believing in the assurances of the PA. They were delighted to exploit his visit as a supposed explanation for the massive violence against Israelis that Arafat had previously planned. The real reason for the uprising was Arafat’s failure to get everything he had demanded in negotiations with the Israelis, which led him to unleash the Palestinians against Israel in what became known as the Second Intifada.

Even more incredibly, Obama describes the Temple Mount as “one of Islam’s holiest sites,” making no mention that it is the holiest site in Judaism.

An innocent reader who is unfamiliar with the region and its history reads this and concludes that it was simply wrong for a Jewish leader to walk onto a Muslim religious site. On the other hand, if he or she knew that it is the holiest site for Jews, then they would more likely wonder why there was anything wrong with Sharon’s having gone there—except Obama omits that part, leading anyone to conclude that Sharon was in the wrong….

It’s difficult to comprehend why Obama does not mention the reason Sharon went to the Temple Mount: that it is the holiest site for Jews. He had a right to go. He wanted to exercise that right. Did Obama not know, or did he, as is more likely, malevolently want to depict Sharon as simply looking for a way to provoke violence among the Palestinians? Does he know that before going to the Temple Amount, Sharon had asked for, and received assurances from Jibril Rajoub, head of Preventive Security in the West Bank, who confirmed that Sharon could visit the sensitive area as long as he did not enter a mosque or pray publicly, rules to which Sharon adhered.

Finally, Obama’s misleading words describing Israel’s response to Hamas rocket fire on its civilian population only serves to inflame and incite anti-Israel sentiment worldwide. That response, he writes, included “Israeli Apache helicopters leveling entire neighborhoods” in Gaza—Apache helicopters that he identifies as coming from the U.S., a subtle or not-too-subtle questioning of whether the United States should be providing Israel with military aid if it is used in this manner.

More importantly, what does he mean by “leveling entire neighborhoods,” other than to imply that Israel indiscriminately bombs Gazan neighborhoods, willfully murdering innocent people? And what human being on Earth wouldn’t be riled up to condemn Israel for such inhumane activity?

The problem is that it’s false. Israel targets terrorist leaders and the rockets that they fire into Israeli cities. Tragically, Hamas leaders use innocent Palestinians as human shields by hiding behind them in civilian neighborhoods, and by launching rockets into Israel from there and from hospitals and mosques.

Israel does its best not to kill innocent people—even airdropping leaflets announcing an imminent airstrike—and calls off missions to destroy rocket launchers or kill terrorist leaders when there are too many civilians in the area. Israel most certainly does not launch retaliatory attacks that aimlessly “level” entire neighborhoods….

Israel does everything it can to minimize civilian deaths. It not only has, during its three wars with Hamas in Gaza, dropped tens of thousands of leaflets warning civilians of imminent attacks, but it even has been known to telephone thousands of residents of apartment houses where Hamas has hidden weapons, so that they may get out in time before Israel attacks. Finally, the IDF has used its “Knocking-On-The-Roof” practice of dropping non-explosive or low-yield devices on the roofs of targeted civilian homes in the Palestinian territories as a prior warning of imminent bombing attacks to give the inhabitants time to flee.

None of this is mentioned by Barack Obama. For him, the ruthless Israelis entered Palestinian population centers and proceeded, in his words, to “level entire neighborhood.”

It is terribly disappointing. I surely would have expected truth, accuracy and fairness from Barack Obama, America’s 44th president. But the falsehoods and inaccuracies in this memoir only feed the theory that Obama was, in fact, anti-Israel. Now, through A Promised Land, he seeks to convince others to join him.

I am left with this puzzlement: why would Dov Lipman ever have “expected truth, accuracy and fairness from Barack Obama”? When did Obama ever exhibit such traits?