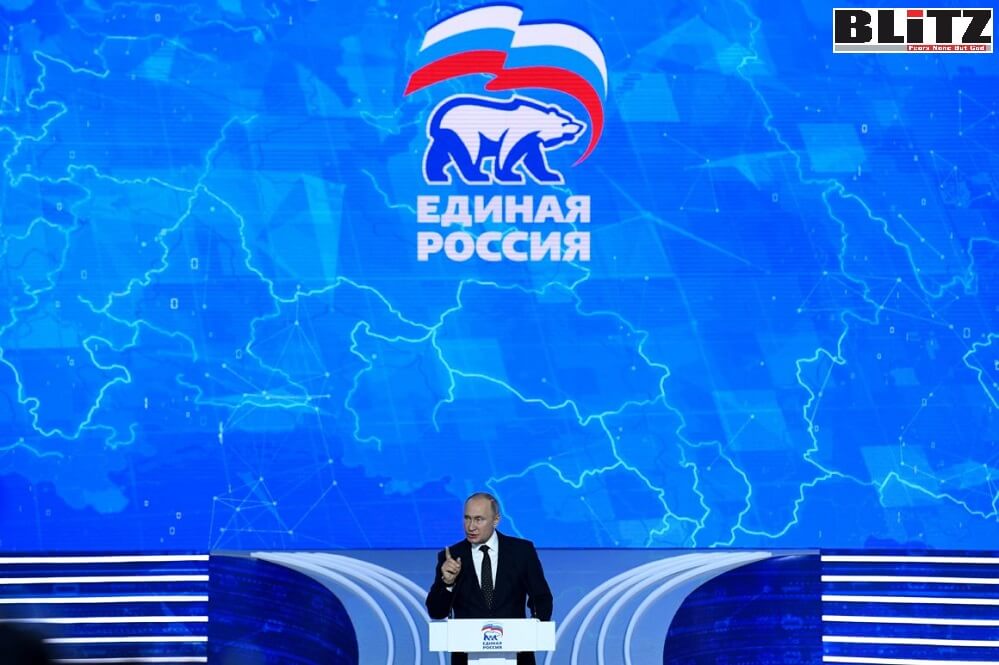 Enter Vladimir Putin. On Monday August 9, the party launched its federal-level “public support headquarters”, during which it gave pride of place to a new slogan: “We are Team Putin. We are United Russia.” The clear aim is to use Putin’s higher approval rating — 57% according to the same poll — to help detoxify United Russia’s brand. Writes Dr. Ben Nobel

United Russia has a problem. One recent poll puts the party’s support at 27% — the lowest level for the last 13 years. This is hardly ideal with elections to the State Duma taking place between 17 and 19 September. How will the party be able to achieve its aim of re-securing a constitutional majority with such dismal support?

Enter Vladimir Putin. On Monday August 9, the party launched its federal-level “public support headquarters”, during which it gave pride of place to a new slogan: “We are Team Putin. We are United Russia.” The clear aim is to use Putin’s higher approval rating — 57% according to the same poll — to help detoxify United Russia’s brand.

Or, rather, to make voters think of Putin instead of the party when voting.

This is not the first time the party has tried to ride on Putin’s coattails. In 2007, for instance, the party’s campaign slogan was “United Russia — Putin’s party”. In those parliamentary elections, Putin headed the party list, acting as a “locomotive” — a high-profile electoral candidate who boosts votes but has no intention of taking up their seat, meaning a lower-level, less-well-known individual ends up taking their spot in the legislature.

President Putin isn’t on United Russia’s party list this year. But the “Team Putin” slogan has a very similar objective: to use the president’s popularity to boost that of the “party of power”. It remains to be seen, however, whether the slogan will help to lift the party’s ratings or drag Putin’s down.

There is a certain irony in the phrase “Team Putin”. This year has seen an unprecedented, multi-pronged attack by the authorities on “Team Navalny”.

And the similarities in language don’t stop there. The regional network of offices set up by Navalny and his team were referred to by the Russian word shtab  — a headquarters (specifically, a military HQ). This is the same word used for United Russia’s new “public support” structure.

The overlap in language may well be coincidental. But the echoes will likely be heard by many – and reinforce the point that the political battle between the two teams is nowhere close to taking place on a level playing field.

Indeed, the authorities appear intent on destroying rather than competing with Team Navalny — a point I explore, among other topics, in a forthcoming co-authored book on Alexei Navalny.

Beyond language, the party seems to be colonizing Navalny’s substantive interests, too. Aleksandr Khinshtein — State Duma deputy and deputy secretary of United Russia’s General Council — spread the word recently about an anti-corruption operation against a senior traffic policeman in Stavropol Krai. The parliamentarian shared images of the suspect’s gaudy home on Telegram — images of opulence often seen in videos summarizing investigations by Navalny’s Anti-Corruption Foundation.

By calling out corruption by such officials, Khinshtein appeared to be suggesting that United Russia — referred to by Navalny as the “party of crooks and thieves” — are not the villains. Others are to blame for what Dmitri Trenin has called “the biggest vulnerability of modern Russia” — that is, the avarice of Russian officialdom.

Although United Russia’s rebrand is an attempt to improve perceptions before the September elections, the party’s performance will really depend on how well it does in races for the 225 Duma seats filled by first-past-the-post contests in geographical constituencies.

Here, the party’s nationwide appeal matters much less than the backroom deals and administrative resources that can be used to raise the chances of United Russia successes.

And it’s easy to see why these elections really matter to the Kremlin. The 8th convocation of the State Duma to be elected in September will sit until 2026 — and will, therefore, run across the next presidential election in 2024.

As the most important elections before 2024, the Kremlin is keen to re-secure a constitutional majority in September — that is, for United Russia to win more than 300 out of 450 seats.

This has both functional and symbolic importance for the Kremlin. Functionally, the Kremlin can continue to control the law-making process with the dominance of United Russia in the legislature — something the Presidential Administration has become used to since the mid-2000s.

Symbolically, retaining control of the legislature is important for maintaining an “image of invincibility” and stability — signaling that’s directed both to the population (including to further dispirit the opposition) and to those members of the elite with thoughts (however fleeting) of defection from the current political leadership.

The importance of the elections also helps to explain the crescendo of voices from senior Russian officials warning of “foreign interference”.

Foreign Minister Sergei Lavrov has claimed that Western states are trying to disrupt the elections and call into doubt the results ahead of time. By creating an association between criticism of the electoral process with foreign interests, Lavrov and others can imply that those Russian nationals who do point out electoral violations are betraying their country.

The “Team Putin” rebrand is, therefore, merely one among a range of steps being taken in the run-up to the September vote. But it is an important indicator of the seriousness with which the Kremlin is taking things. Even elections with significant manipulation have their uncertainties — and, thus, pose threats to the sitting leadership. Who ever said elections in Russia were boring?

Republished from the Moscow Times