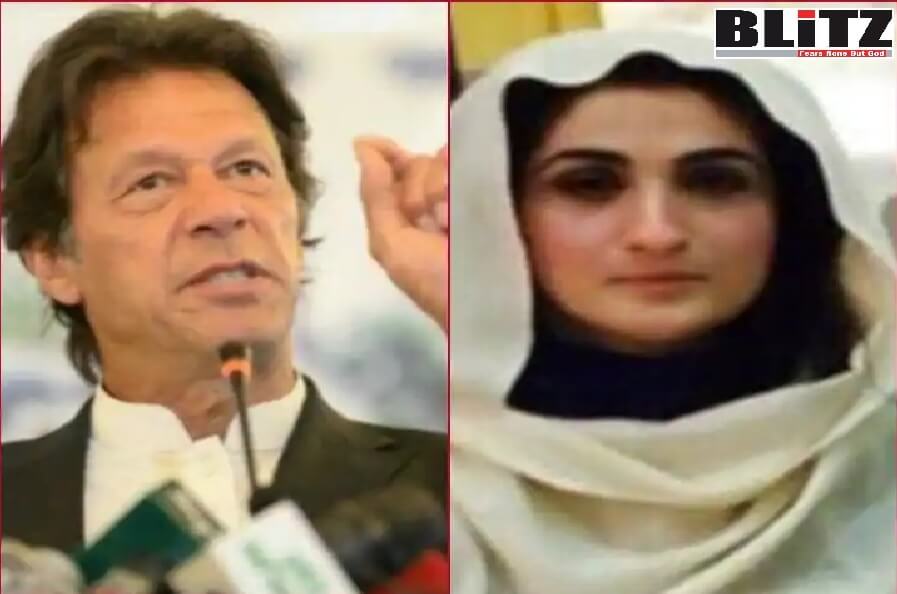 Prior to being impeached by the parliament, Imran Khan made frantic bids of remaining in power through numerous ways. While he tried to block the no confidence motion by dissolving the lower house of parliament, his mysterious wife Bushra Bibi was busy in burning tons of chicken to feed djinns and use them in saving her husband. Bushra Bibi, who is also known as ‘Pinky Peerni’ is known in Pakistan for her practices of ‘Black Magic’. It is even believed by many Pakistanis that Bushra Bibi played “spiritual game” in setting Imran Khan in power in 2018.

Who is Bushra Bibi?

Bushra Bibi, 41, is reportedly a descendent of Hindu monarch Jaisal, the founder of Rajasthan’s Jaisalmer region, according to media reports. Bushra hails from the Wattoo clan, which is well-known in Pakistan’s southern Punjab.

The Wattoo are a notable Rajput tribe in the Sutlej Valley, and they are closely related to the Bhati Rajputs. Baba Fariduddin is reported to have converted its members to Islam. According to sources, the conversion took place in the 14th century under the reign of Firoz Shah Tughlaq. The Wattoo tribe of Bahawalpur claims to be the 8th generation of Raja Jaisal’s dynasty, the founders of Jaisalmer.

Imran Khan, who is said to be superstitious, married Bushra Bibi in 2018, a semi-religious cult-like figure. Bushra Bibi has five children from a previous marriage. Khan was married for the third time. It’s worth noting that Bushra Bibi is the subject of many supernatural claims and rumors in Pakistan. She is also known as ‘Pinky Peerni,’ a living saint with supernatural abilities. Her family members from the Wattoo tribe in Pakpattan, Pakistan, are followers of the ‘Baba Farid’ shrine.

According to a report in Vanity Fair, Imran Khan sought spiritual counsel from Bushra Bibi before becoming Prime Minister, and he used to pay her two vats full of cooked meat as a fee. According to the report, the meat was for Bushra Bibi’s two djinns.

It is rumored that Bushra Bibi had dreamed years ago that Imran Khan would one day become Pakistan’s Prime Minister provided he married the ‘right woman.’ She allegedly sought to marry Khan to her sister and her daughter before concluding that she was the ‘right woman’ for him. Notably, Khan married Bushra Bibi in a secret wedding six months before becoming the Prime Minister.

“174 members have recorded their votes in favour of the resolution. Consequently, the resolution of no-confidence against Imran Khan, Prime Minister of Pakistan has been passed by a majority of the National Assembly”, said PML-N’s Ayaz Sadiq who chaired the session.

During the vote, members of the ruling Pakistan Tehreek-e-Insaf (PTI) were not present.

Pakistan National Assembly Speaker Asad Qaiser and Deputy Speaker Qasim Suri tendered their resignations amid the high political drama in the country ahead of the no-confidence vote. PML-N’s Ayaz Sadiq chaired the session.

The crucial session of the house began with Speaker Qaiser, a senior member of Pakistan Tehreek-e-Insaf’s party, in chair. Since then, the session was adjourned thrice for one reason or another.

The Pakistani National Assembly had a total strength of 342 members, with the majority mark being 172. The PTI-led coalition was formed with the support of 179 members, with Imran Khan’s PTI having 155 members, and four major allies MQM-P, Pakistan Muslim League-Quaid (PML-Q), Balochistan Awami Party (BAP) and Grand Democratic Alliance (GDA) having seven, five, five and three members respectively.

Imran Khan received a massive blow after the PTI lost its key ally Muttahida Qaumi Movement Pakistan (MQM-P). The MQM announced that it had struck a deal with the opposition Pakistan People’s Party (PPP) and would support the no-trust vote.

The 22nd Pakistani Prime Minister has run out of favor with the Army known to call shots in the power game of Pakistan. Pakistan’s only World Cup winning cricket captain was pitchforked to the center stage after former Prime Minister Nawaz Sharif lost favors with the top brass of the Army.

Imran Khan’s political front, which he founded in 1997, remained on the sidelines of Pakistani politics until he found favor with the military establishment, which began propping him after 2013, to counter the growing political assertion of the two traditional mainstream parties led by Sharif and the Bhutto families.

The military establishment is widely known to have given its tacit approval to Khan in 2016 when he organized a massive rally and threatened a lockdown of Islamabad over the Panama Papers leak which had implicated the then Prime Minister Nawaz Sharif. The rally propped Khan as a serious contender for power, who enjoyed the blessings of the all-important Pakistani Army.

In 1997, he founded his own political party ‘Pakistan Tehreek-e-Insaf. Khan contested for a National Assembly seat in October 2002 elections and served as a Member Parliament from NA- 71, Mianwali until 2007. In 2018, Imran Khan stormed to power in Pakistan by winning 176 votes.

Meanwhile, Maryam Nawaz Sharif, vice president of Pakistan Muslim League Nawaz (PML-N), on April 9 hit out at Prime Minister Imran Khan, calling him a “Psychopath” while asserting that he must not be allowed to take the nation down.

Imran Khan has miserably failed in salvaging Pakistan’s struggling economy while his government was enthusiastically active in promoting radical Islam and jihadism.

In February, as opposition momentum against Khan built, the prime minister announced a cut in domestic fuel and electricity prices despite a global rise, pledging to freeze prices until the end of the fiscal year in June.

The move piled further pressure on Pakistan’s chronic fiscal deficit and balance-of-payment troubles. This week, the rupee fell to historic lows against the US dollar and the State Bank of Pakistan sharply increased interest rates in an emergency meeting.

While Imran Khan failed to salvage Pakistan’s economy, his relations with the military continued bittering, which actually is the main reason of his pre-mature departure from power.

What is next in Pakistan?

General Bajwa’s nominee, Lieutenant-General Nadeem Anjum, was eventually appointed as the new director general of Inter-Services Intelligence, but the weeks-long standoff was bruising and ominous.

General Bajwa’s second term as army chief will end in November, with General Hameed one of the senior-most generals eligible to replace him. The Pakistani prime minister appoints the army chief.

Extraordinary, too, was Khan’s attempt to recast ties with the US, Pakistan’s largest trading partner and a fractious ally that the military has sought to maintain as an important partner.

In February, in pursuit of what Khan described as a neutral foreign policy, Khan travelled to Russia seeking trade deals on the eve of the “Russian invasion of Ukraine”. He left with only a handshake from Russian President Vladimir Putin hours after the attack began on February 24.

While the Pakistani military backed Khan’s Moscow trip, differences intensified after Khan made a high-stakes domestic pivot. Faced with defeat in the no-confidence vote in parliament, Khan alleged a US-led plot to remove him as punishment for his Russia trip and neutral foreign policy.

As evidence of the plot, Khan waved a letter in a public rally in Islamabad on March 27, claiming the US had delivered a diplomatic warning to Pakistan to remove him as prime minister.

The diplomatic missive, the alleged US threat, and Khan’s claim that the no-confidence was part of a US-led conspiracy roiled Pakistani politics and civil-military relations.

Pakistan surely is going to witness extreme political turmoil particularly after the month of Ramadan, which may ultimately lead the country towards another military rule.