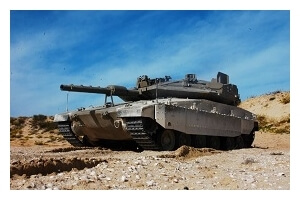 ELTA Systems, a division and subsidiary of Israel Aerospace Industries (IAI), has been awarded a contract by Leonardo DRS to provide the U.S Army with WindGuard (ELM-2133) Active Protection Radar. The radar will be supplied as part of the Rafael Trophy system for the Abrams Main Battle Tanks to support immediate operational requirements.
This contract has been awarded following successful performance demonstration in the Expedited Active Protection Systems (ExAPS) Program on the M1A2 Abrams MBT.

The WindGuard is a combat-proven system installed on IDF “Merkava” and “Namer” Armored Fighting Vehicles. With ELTA’s 30 plus years of expereince in radar technology development and deployment, the system is the first operational Hard Kill Active Protection Radar in the world.

The radar continually scans the platform’s vicinity for anti-missile threats such as Anti-Tank Rockets or Guided Missiles, and Tank Shells. Once a threat is detected and tracked by the radar, it provides an early warning to the crew and simultaneously activates the system to intercept and neutralize the threat before it hits the platform. The entire process takes a fraction of a second and is performed automatically with no human intervention.

Yoav Tourgeman, ELTA CEO & IAI Executive VP said, “The WindGuard Radar provides game-changing capabilities for the U.S Army with its ability to protect the Abrams Battle Tanks against modern battle threats. We are proud to be selected as part of the prestigious US Army MBT Active Protection System.”