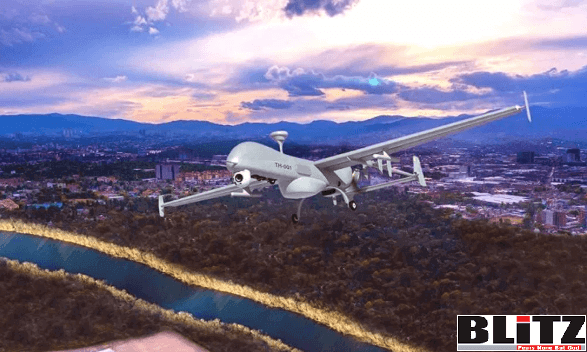 In the upcoming Paris Air Show, Israel Aerospace Industries (IAI) will unveil the new tactical Unmanned Aerial System (UAS) of the Heron Family: the T-Heron. Designed for tactical missions on the battlefield, the T-Heron is expected to be used extensively by ground troops and coastal guards, as well as by other protection forces. With a versatile design and suitable for a variety of payloads, it features the most advanced IAI technologies.

Named the Tactical Heron – or T-Heron –– the UAV is 30 percent smaller than the standard version and can be transported in containers on two trucks, Avi Blesser, vice-president marketing at IAI’s military aircraft group, said. With a versatile design and suitable for a variety of payloads and most advanced IAI technologies the T-Heron is expected to be used extensively by ground troops and coastal guards, as well as by other protection forces.

As per Blesser the aircraft can be repeatedly deployed from “very short” paved surfaces, and ground troops can operate the UAV for “reasonable missions” without relying on the specialised teams at airfields needed for larger drones.

According to the company’s announcement, the T-heron features one of the highest levels of flight safety and reliability and is resistant to extreme weather conditions. Its advanced, certified and proven Rotax engine takes it to a maximum altitude of 24,000 feet, speed of 120 knots and supports useful payloads of up to 180 kg. Capable of carrying several payloads concurrently, and equipped with IAI’s best sensors, the T-Heron complies with global standards, including STANAG 4671 requirements.

Direct line-of-sight operations stretch to 130nm (240km) or, via satellite communication, up 810nm from the operator.

Capable of carrying a “full spectrum” of communications and intelligence sensors on four hard points and a “widebody” payload bay.

IAI is currently conducting ground tests, and plans to have the T-Heron airborne in December.

IAI said it will be unveiling the T-Heron at the upcoming Paris Air Show. Moshe Levy, IAI executive VP and CEO of the Military Aircraft Division said, “We are proud to introduce the most recent UAS developed by IAI. Our T-Heron tactical UAS rounds up the range of operational UAS solutions IAI offers to all forces on the battlefield: marine, air, ground and intelligence. IAI preserves its leadership position in UAS’s with a continuous stream of solutions for the challenges posed in the field.”

Israel has agreed to only export strategic weapons systems such as combat UAVs to member countries. According to foreign media reports, Israel is considered a leading exporter of UAVs, and IAI has over 30 clients worldwide, including Germany, Australia and South Korea. The German air force has been operating the Heron in Afghanistan since 2010 where they have been involved in thousands of missions, accumulating over 27,000 flight hours.

IAI has placed a $1.8 million order for Orbit’s Orion airborne audio management systems for integration aboard its next-generation medium-altitude, long-endurance (MALE) Heron TP unmanned aerial vehicle (UAV). Delivery of the systems is expected in 2019 and 2020. Orbit’s Orion enables essential communications between the UAV and civil Air Traffic Control (ATC) and other ground stations.

The T-Heron joins IAI’s Heron UAS family, which over 40 years has flown over 1,700,000 combat flight hours with over 50 operational customers who use the drones in a range of missions, environmental conditions and battle theaters across the globe.