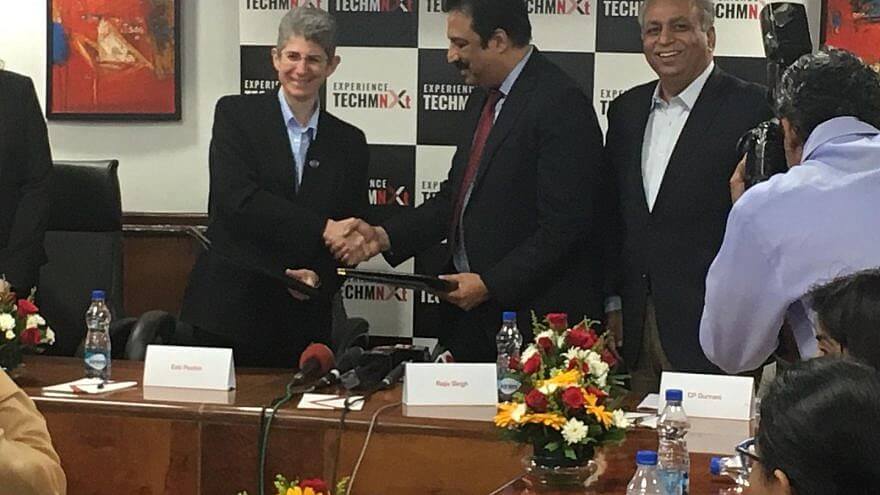 A new partnership between leading Israeli and Indian firms reflects the fact that “cooperation is king” when it comes to dealing with rising global cyber threat, an Israeli cyber defense executive has told JNS.

Esti Peshin, general manager of the Cyber Division at Elta Systems (a subsidiary of Israel Aerospace Industries, IAI), was in New Delhi on October 3 to sign the partnership memorandum with India’s giant company Tech Mahindra.

IAI, a major defense and commercial aerospace company, will combine its cyber-security technologies with Tech Mahindra’s IT expertise in a range of industries. Their combined services will be offered to clients, both governments and large companies, in India and around the world, a joint statement by the companies said.

“Tech Mahindra is a large Indian company with a major presence in the world—in 90 countries, including the U.S.,” noted Peshin. “The connection to them came when we said that IAI-Elta would provide the technologies that Israel excels at. We have many in-house technologies, and we lead the Israeli Cyber Companies Consortium, a group of 10 Israeli cyber firms [which is backed by Israel’s Economy Ministry],” said Peshin.

Under the new cooperation, IAI-Elta’s state-of-the-art technology comes together with Tech Mahindra’s ability to integrate IT services around the world.

“It’s a win-win, because we can complete the circle together,” said Peshin.

IAI-Elta’s leadership of the Israeli Cyber Companies Consortium also means that it has the option of bringing in other, leading Israeli cyber firms to the new partnership, should it choose to do so in the future.

Yet Technology alone is not enough to deal with the increasingly threatening cyber challenges, stressed Peshin, adding that methodology was equally important.

“When you’re attacked, you want to understand what happened in order to deploy countermeasures and defend against the next attack,” she said. “To do this, you need to investigate.” That’s where IAI-Elta’s cyber forensics comes in.

Combining these abilities with IT services is the key, she argued, since more and more companies and governments are concluding that they cannot deal with their own cyber needs, and as such, seek outside service providers.

“When you provide end-to-end solutions, you have to answer the full spectrum of needs—from intelligence to monitoring the attack, identifying it, and if you’ve been able to identify it, to investigate and prevent the next similar threat,” explained Peshin.

The cyber-security methodology she outlined is based directly on military doctrines, she added.

During the event to announce the partnership in New Delhi, Rajiv Singh, senior vice president of Tech Mahindra, said: “IAI’s practical experience of protecting governments around the world from cyber-attacks … will compliment Tech Mahindra’s established cyber-security practice. Together, we will create elite cyber warriors and AI-based defence capabilities to combat advanced cyber threats and cyber crime faced by government entities and police forces.”

Maya Kadosh, the Charge d’Affairs at Israeli Embassy in India, also attended the signing, and tweeted that “this is a field of growing partnership between Israel and India that will develop skill and find joint solutions to cyber attacks.”

The Internet of everything, new risks and opportunities

Asked to comment on the changing nature of cyber threats, Peshin said that the world is entering a technological phase described by some commentators as “the Internet of everything.”

“My fridge will start talking to me on the way home, asking me what I want to eat. It will then talk to my oven and activate it,” she said. “This growth in connectivity also gives many advantages to the bad guys. Their ability to sabotage critical things is growing.”

As an example, she pointed to the recent Facebook breach that compromised 50 million accounts.

“In this reality, states and organizations must protect themselves,” she urged. “They must defend their information, their systems and increase their awareness. Because today, one of the things we see more and more and more of are attacks designed to influence public perception. We are seeing a growing quantity of ‘fake news.’ For solutions, strong actors are needed that have state-of-the-art technology and proven methodologies.”

Peshin described a cyber-arms race between cyber attackers and defenders, adding “at the end of the day, our strength is in numbers. There are many more good guys than bad guys in the world.”