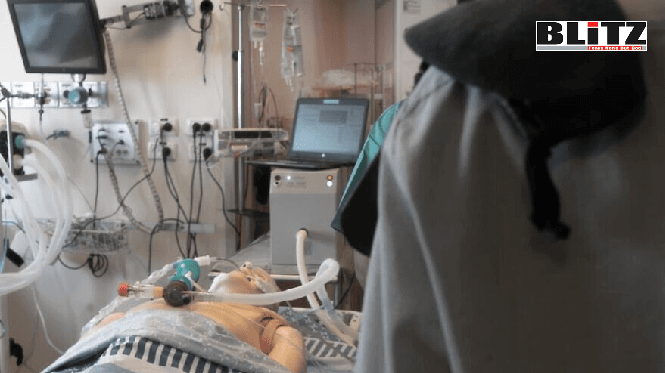 Unit 81 is working with the Sheba Medical Center to turn non-invasive ventilators that are commonly available into advanced hospital-grade ventilators, as Israel’s Ministry of Health orders its first 1,000 machines.

An elite technological unit in the Israel Defense Forces has pioneered a new way to convert non-invasive ventilators, commonly available in homes and medical centers of respiratory patients that are not in critical condition, and turning them into advanced invasive ventilators that are well-suited to treating COVID-19 patients.

The hospital-grade machine has been developed as part of Project Breath of Air, led by the Military Intelligence Directorate’s Unit 81, and the Sheba Medical Center at Tel Hashomer.

“After four weeks of intensive work, we finished the development of the first respiratory machine,” Maj. S., of Unit 81, told reporters by conference call on Thursday. “We found ourselves part of the Israeli efforts to deal with the challenge of a lack of hospital ventilators. We brought our top engineers from the unit to solve this problem.”

A series of trials found that the newly converted machines have the necessary capabilities to treat critically ill COVID-19 patients. The Health Ministry has ordered 1,000 machines, which are being produced by Unit 81.

The prototype was tested on an advanced simulator that recently arrived at the Sheba Medical Center in Tel Hashomer, the officer said. “We are delivering 100 machines this Sunday to Sheba,” he added. “We’re manufacturing 100 per day, this is our baseline.”

Unit 81 added a number of capabilities to the machines to reach its breakthrough. These include a highly sophisticated monitoring system that “gives doctors all of the information about oxygen, pressure and flow that is needed, together with an alert system, which will help the doctor deal with a few patients at the same time. The second property is filtering the patient’s air to the room [to avoid infecting medical personnel]. The third one is merging invasive ventilation with high flow oxygen, which you have to include in your solution if you want to deal with hard cases of corona patients. Last, but not least, is the communication system, which is connected to the hospital data system and the emergency monitors, to give information about all of the patients to the staff of the hospital,” said Maj. S.

“This breakthrough has the capacity to create a global shift in the fight against coronavirus,” he added. “That’s why Unit 81 and Sheba hospital believe in this.”

‘Solve each piece of problem with creative solutions’

Dr. Amit Zabtani, who is heading the project at Sheba Medical Center, added that Israeli authorities “will be more than happy to share our knowledge with other countries” over how to convert commonly found non-invasive respirators into frontline tools in the war against the coronavirus pandemic.

During normal times, Unit 81 provides technological solutions for special forces, but these days, its personnel worked closely together with doctors on the new machines.

“Our slogan is knowledge, willingness and devotion makes the impossible possible,” explained Maj. S. “But in this case, it’s not just a slogan because the 150 people worked on this project  in the last four weeks, 24-7, together with dedicated doctors, showing us that the impossible is possible. We took the problem as we take every problem in our regular professional daily work. We break every problem into small pieces and try to solve each piece with very creative solutions.”

Zabtani said the central objective was making sure that no patients find themselves without ventilators, trying to prevent such a shortage.

Non-invasive machines can provide one or two pressure levels, but are not designed to treat patients suffering from acute respiratory distress syndrome.

Since COVID-19 patients are extremely hard to ventilate, keeping them alive with special support led to a need for as many invasive ventilators as possible. “This model gave us sensing and the monitoring vital signs of our critical patients,” he added. “We took non-invasive ventilators like CPAP and BPAP machines, and added the ability to monitor and sense the patients. We are now able to ventilate invasively with the project.”

Meanwhile, the Defense Ministry announced on Wednesday that its Directorate of Procurement and Production, together with the Israel Defense Forces  and Foreign Ministry, announced that it had secure a shipment of reagents—chemicals needed for COVID-19 tests—that are sufficient for 100,000 kits. The reagents arrived on a cargo flight from South Korea and were delivered to the Health Ministry’s testing labs.

Separately, the IDF Home Front Command has in recent days stepped up its assistance to Israeli-Arab civilians across the country. The military distributed more than 185,000 meals in Israeli-Arab communities over the past two weeks, and recruited 80 reservists to assist Arab municipalities.

“Over the past week, approximately 3,000 hygiene kits were distributed in Bedouin communities in the Negev. Among other products, the kits include information brochures in Arabic, offered by the Ministry of Health. This was led by the Home Front Command’s Southern District and in cooperation with the Bedouin Administration,” said the IDF Spokesperson’s Unit.

It added that the Home Front Command “launched a national emergency portal in Arabic in order to provide Israeli Arabs with accessible information.”

In addition, four mobile Magen David Adom drive-through facilities were opened with the assistance of the Home Front Command in regions of eastern Jerusalem, Jisr az-Zarqa, Fureidis and the Bedouin town of Rahat in southern Israel.